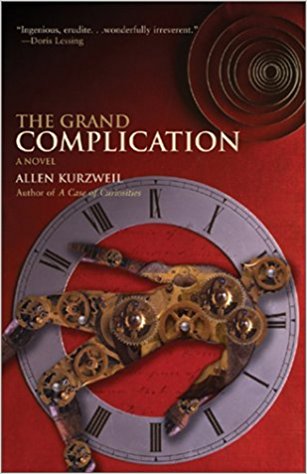 I finished The Grand Complication by Allen Kurzweil this week. It was published in 2001.  The novel is about a reference librarian named Alexander Short who embarks on an after-hours antiquarian project that gradually preoccupies him and his partner, Henry James Jesson III.

I basically did not like this novel. I didn’t find much in it that was very good. The storyline is quite rocky. The main character is relatively developed, but he’s got this naivete about him that seems to come and go whenever the author needs to use it.  The other major character, Jesson, is quite simply weird. Although we seem to be told a great deal about him, I don’t feel like I was supposed to believe any of it. And on top of all we are told, I feel it does not really explain any of Jesson’s motives or ideas.

There are parts of the story that are simply odd and weird. For example, the very unpleasant scene in Jesson’s bathroom which resulted in one of the character’s touching another character’s private parts. For no reason. Really. The scene is just there for some unknown bizarre reason that doesn’t seem to be in line with any part of the characterizations or storyline.

Short and his wife have a downright spiteful and evil relationship. It is one thing to have a troubled marriage, I suppose, but these two are just bizarre. She’s high-strung and wild, he’s aloof and spineless. Its not a nice relationship – so at the end of the book when the reader is supposed to believe that the relationship is all patched up, it ends up feeling contrived.  There’s an feeling of weird sexual fetishes subtly underlying much of the storyline, I think, which I did not like.

As far as being “intelligent,” I am not so sure. I mean, I feel terms get tossed around that to a lay-person would make the book seem “smart,” but in some cases its benign intelligence. There are a few Latin phrases that everyone seems to be familiar with. For example, “veni, vidi, vici,” and “festina lente.”  Everyone probably knows these if they have an ounce of education. But Kurzweil uses festina lente and it seems like he thinks that the reader should be impressed? Or that he thinks using Latin makes his book “smart”?   Short uses terms like octavo and quarto to describe books in the library.  However, unless one is a publisher or an antiquarian, nobody is exceedingly familiar with these sizings. So this I would expect an explanation for, not for festina lente. But we don’t get one.

Anyway, its not a good read, though it is a very fast read. I generously give the book 2 stars, because it still was readable in some sense.