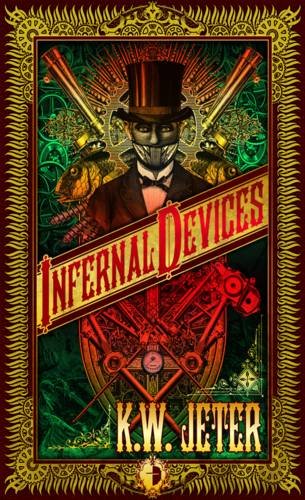 Infernal Devices was written by K. W. Jeter and first published in 1987. It went out of print and was finally picked up and republished in 2011 by Angry Robot Books.  The cover artist for the 2011 edition was John Coulthart.  Coulthart has done a number of pieces in the science fiction/fantasy genre as well as some work related to H. P. Lovecraft’s stories.   I absolutely love the cover art for this Infernal Devices edition. (There are a couple typos in this Angry Robots edition… punctuation randomly placed, lack of capitalization in a few places, some spelling typos. An editor was needed. But I can forgive all because of the pretty cover).

It is said that this novel is one of the first books to be classified as “steampunk,” and some have suggested that Jeter is the one who coined the term.  I feel like dealing with “steampunk” is something like dealing with the word “logos.”  Those who know what it is, know what it is, but cannot really explain it the same way twice. And even if it gets explained, it still feels like there’s something missing.  I can try to explain it – but I am far from an expert; I’m just a novice.  First, some examples.  Alan Moore’s The League of Extraordinary Gentlemen, Jules Verne’s Twenty Thousand Leagues Under the Sea, the movie Sky Captain and the World of Tomorrow, and Cherie Priest’s Boneshaker are all well known examples of the genre.  The TV show Warehouse 13 has many elements of steampunk.  Some characteristics of the genre are a heavy reliance on the Victorian era.  Works of steampunk often feature anachronistic technology or futuristic innovations as Victorians may have envisioned them, based on a Victorian perspective on fashion, culture, architectural style, and art.  Speaking broadly, steampunk is often set in an alternate version of the Victorian era – the differences being the inclusion of science fiction/fantasy elements.

Infernal Devices is an easy-reading novel.  One sentence leads to another, one page turns after another, and before you know it, you’re three-quarters of the way through the book.  The prose has many hints of the diction and pacing of what one might expect from the Victorian era, so it takes a little to get used to, but once the reader is through the first few chapters, the book just breezes by.  The story itself is told by the main character who is, presumably, writing his remembrances of the events of the story.  The main character, George Dower, is the son of a very skilled watchmaker.  The father, we learn, also developed any number of complex inventions such as automatons, robots, and other mechanisms – all of which leave the son clueless and frustrated. One of the father’s celebrated machines is an “automaton” that looks and acts similarly to his very son. Many of the father’s inventions involve the concept of harmonics and vibrations.

One of the things that I like about the book is the writing style (some have compared it to H. P. Lovecraft.) I like the way that Jeter, without boring us with extraneous text, is able to paint the setting and background.  Rainy London, dark alleyways, creepy characters, etc. are all very easily imagined by the reader. Some complaint has been made by other readers that the main character is unlikeable. He is a bit passive and dim-witted at times. However, I do not think it is fair to say he is unlikeable. In fact, he seems ridiculously resilient – he undergoes a non-stop series of adventures that would wear out someone in peak mental and physical condition.  He’s a bit naïve.  I do not know that the reader necessarily cares about Dower as much as follows Dower around. Dower, on occasion, has some interesting lines that develop from his reflection on his adventures.

“I was too exhausted to sort the real from the false; sanity often consists of knowing what not to think about.” – chapter 7

The biggest problem with the book is that it contains way too much.  Most of the time it seems like Jeter tried to cram every idea he had into this one text.  I feel like Jeter wrote a couple of chapters, hit upon a new idea, and then ran off chasing that idea. A few chapters later, he had a new idea and likewise ran off following that one.  The end result is a story that has way more threads than tidy seams.  There are characters that appear to be villainous and move the story along, but their motivations are thin, they play their role, and then we run along to the next idea.  There is one character in particular, Mr. Charlies Wroth, that really changes his role in the story about four times. It’s too much and at the end, I felt a bit angry at the author – he was cheating the reader by changing the characters at the last minute.

There is too much in the story. The many characters, the many “big ideas” (which move from a device that destroys the earth, to fish-people, to future-seeing criminals, to a money forger, to a weird inventor-father, to being a captive on a ship, to automatons that are violinists, etc. It’s just one big idea after another without fleshing any of them out or giving the reader any sort of detail. Like Dower, we race into one “big idea” to another. Sure, it’s creative, but it’s superficial and needed to be parsed out.  One novel cannot contain so much “stuff” without seeming really discordant and random. The whole book is a mad chase.