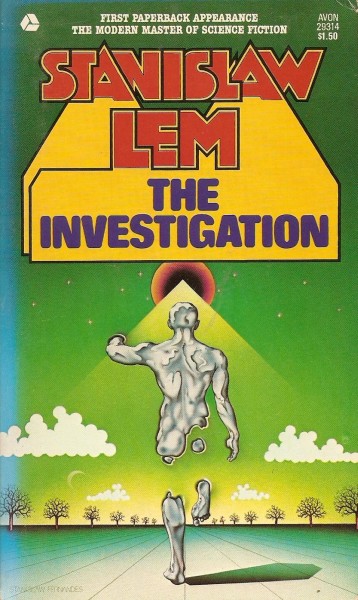 The Investigation by Stanislaw Lem was first published (in Polish) in 1959. It was translated in this edition in 1976 by Adele Milch.  This is the second novel by Lem that I have read.  I do not think that this novel fits the standard idea of science fiction found in the new and shiny bookstores.  Honestly, I am okay with this. However, it does fit the idea of “science fiction” in a classic literal sense. This novel is fiction and the entire thing is about science – or, rather, scientific inquiry.

This is one of the most creepy and eerie books I’ve read.  I was reading this book late at night (after midnight) and I had to put it down and read a few pages of something else.  It doesn’t really have much gore or violence at all, but the thing is still eerie to the maximum! I do not find many truly “disturbing” books, most are shock-factor gore or comical horror. This is a science fiction novel that will make your skin crawl.  Now, I do want to include a small disclaimer:  you have to be an intelligent reader in order to experience the thrill.  If you do not have patience for a little bit of philosophy/psychology/statistics, well, you probably will experience something other than creepy-eerie.

A Scotland Yard lieutenant is charged to investigate the mysterious disappearance of corpses from London morgues. The only “explanation” is a statistical theory that correlates the body-snatching with local cancer rates. The detective from the very beginning suspects the statistician being the perpetrator. Reality, however, proves less mundane and certainly less comprehensible than he had hoped. In The Investigation the classic procedural police mystery is turned into a metaphysical puzzle, in which Kafkaesque themes are present. Philosophical questions are presented under the simple surface of the plot:  what is the role of scientific inquiry? What does the existence of competing explanations mean for that goal?

This novel will leave you with unanswered questions – if you do not like books that do not sew up perfect resolutions on every conflict/problem, then you probably will not like this novel.  To be fair, unlike a lot of novels that leave things unresolved just because the author thinks that is a fun literary technique, that’s not what Lem does in this novel.  The whole point of this novel is the concept of scientific inquiry, the boundaries of rational detective work, and the possibility of answers that are beyond the intellect.

Late in the novel, toward the end of chapter 6, the statistician named Sciss tells detective Gregory about a problem that resulted in Sciss losing the command of Operations.  The theory that Sciss shares is interesting  – and as frightening as the bodies moving from the morgues. I quote a part here, since it does not really have any gigantic bearing on the whole plot…………………………or does it?

“The nuclear race was just beginning.  Once the race starts it can’t stop. It has to go on. If one side invents a big gun, the other side retaliates with a bigger one.  The sequence concludes when there is a confrontation; that is, war.  In this situation, however, confrontation would mean the end of the world; therefore the race must be kept going. Once they begin to escalate their efforts, both sides are trapped in an arms race. There must be more and more improvements in weaponry, but after a certain point weapons reach their limit.  What can be improved next?  Brains.  The brains that issue the commands.  It isn’t possible to make the human brain perfect, so the only alternative is a transition to mechanization.  The next stage will be a fully automated headquarters equipped with electronic strategy machines.” –  pg 159, chapter 6

Definitely at least a four-star rating for this book. I guess an argument could be made to give it all five stars.  What I do know is that after having read this Lem book, I’ve read two by the author and really enjoyed both.  Lem is an excellent writer, a master of novels and ideas and originality.  Certainly, I want to read all the Lem stuff I can get my paws on.