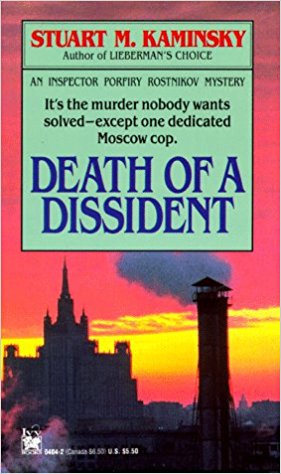 Today I finished Death of a Dissident by Stuart M. Kaminsky (1934 – 2009) .  This is the first book that I have read by Kaminsky.  I started purchasing the Kaminsky novels in the Inspector Porfiry Rostnikov series that I find at cheap prices.  Unfortunately, I do not have book two.  Death of a Dissident was first published in 1981, but I read the 1989 edition.  I picked up my copy used for $2.

I was not sure what to expect from this novel.  I was wary of trying out a new author.  I generally enjoy cozy mysteries, but am leery of bloody, crazed murderers (as you should be, too).  I was okay with the Michael Connelly novel I read, I really enjoy Agatha Christie, and I have been pleased with the few other light mysteries that I have read in the past.  I was worried, though, that this novel might be a bit too gory or dark.  That is generally one of the main reasons I am nervous about reading mysteries.  I do not like reading thriller/mysteries which are filled with depravity and gore.  Another reason I was wary was that I worried the background and setting of this novel might feel really dated.  Or that the author would try to over-write the whole USSR background.

Luckily, my fears were unfounded.  I actually really liked this novel and read it fairly quickly.  The best part of the novel is that Kaminsky did not overwrite the “dismal, politically-charged” USSR setting.  It is actually written really well and gives a really good insight into Kaminsky’s interpretation of the USSR.  The characters were also really well done, I think.  Nothing massively in-depth, but I came to like all of them.  They are all interesting and make the novel much better than it would be with flat or hideous characters.  The subtle and not-so-subtle political awkwardness of the police force dealing with the political structure made for a unique and interesting setting.

Rostnikov was worried about the girl, true, but he was also worried about how he might explain the destruction of the automobile.  His body and that of the driver could be repaired by doctors.  Doctors in Moscow were good and there would be no cost.  But to repair an automobile. Ah, thought Rostnikov, that may be much more difficult.  (Chapter Twelve)

The villain was a bit twisted, to be honest.  There was a scene toward the end of the book where I was worried things were going to cross that line into “too graphic and gory” for me to want to read.  But the whole thing turned out okay and Kaminsky did not cross the line-of-yucky.   The main character, Porfiry Rostnikov, is a big hit, I think.  He is a fairly good Russian imitation of a war-hardened hard-boiled detective.  He is patient and brooding, just as one would expect.  But he also is politically savvy – although he is not completely subservient and whipped by the political edifice.   I like the supporting characters, too, particularly Emil Karpo.  Karpo is really fun and awesome – I am glad I met this character.

This is the sort of book you want to see as a movie – but done well, not ruined by some ridiculous Hollywood interpretation.  I am giving it four stars for the writing style (dry-humor and subtle) and for the characters.  The background of the USSR is worthy and should interest those with a fondness for Russia.

Moscow begins work at five in the morning.  The few hours before are for the criminals, the police, taxi drivers, government officials at parties, and party officials working on government.   (Chapter Two)