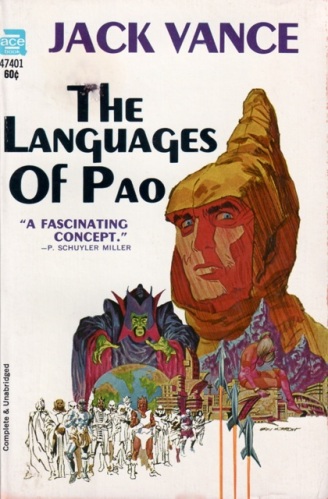 The Languages of Pao is one of Jack Vance’s earlier works, published in 1958.  It is the third Vance novel that I have read, and probably the best so far.  I really enjoyed this novel and am going to give it a high rating.  However, I can see where some readers may not fancy this sort of novel.

This is science fiction for smart people.  In other words, it takes a bit of aptitude to read this and enjoy it for what it is.  If a reader comes to this novel thinking it is something else, they will be aggravated.  The Languages of Pao is not an action novel.  There are, really, only three characters in the novel.  Reader who are used to “growing up with” characters who reside in 10-tome epic fantasies, may find these characters underdeveloped.  I would disagree; they are just not rendered with tedious detail.  Finally, this novel only has the smallest amount of scientific detail.  So, readers who are used to high-tech, mecha stuff might be disappointed.

There is a concept that Vance utilizes in this novel that provides the overarching theme.  Wikipedia proudly proclaims this the linguistic Sapir–Whorf hypothesis.  This particular “hypothesis” was developed by Wilhelm von Humboldt, Franz Boas, and Edward Sapir.  I cannot speak for how familiar our author was regarding these linguistic theories.  I, frankly, am not too familiar with them, although I’ve run across the names of these fellows plenty; particularly in philosophy of language and anthropology.  Humboldt generally comes up in reference to political philosophy.

Anyway, you may be chomping at the bit for me to explain what this Sapir-Whorf concept is.  Well, I’m not going to.  Because that’s what Vance’s book does.  On the planet Pao with main character Beran Panasper.  Let me then, simply, boil this whole thing down to one question:   “What role does language (organic or artificial) play in a social group’s understanding of reality? In other words, how does it shape their lives, nation, and outlook?”

It is okay to admit that the above paragraphs bored you to tears and you have already decided this novel is not for you.  However, understand that Vance is dealing with that linguistic question by working in the science fiction genre.  So, Vance selects three main facets of society (represented by the Paonese, the Breakness, and the Brumbos) to cause havoc on the planet Pao.  All of this gets situated within the political scheming/intrigue of the ambitious characters.  It is like Dune – without all of the sandworms, blue-eyes, and crazy witches.  But nevertheless, I see a lot of parallels between the two novels.  And the “villain” is not really a bad guy from all perspectives.  Plus, he’s the one that comes with the neat “modifications” – (surgical enhancements to his person).

I love Vance’s use of vocabulary.  I appreciate how he works with a linguistic concept without making his novel overlong or bludgeoning the reader (Mieville, looking at you, son).  I neither loved nor hated the characters, but I was interested to see what happened.  And maybe this is not the most exciting read in science fiction, but it surely is one of the more intelligent and well-written.  The only complaint is that it seems set up too artificially, almost as a too-carefully controlled experiment.  But on the other hand, what author doesn’t do this?