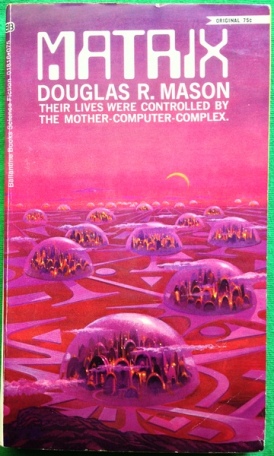 Matrix by Douglas R. Mason was published in 1970.  I read the Ballantine January 1970 edition with the cover by Paul Lehr.  This is the second book by Mason that I have read.  I have one more currently in my collection that I have not yet read.

Truth be told, this novel is, more or less, a re-write of Eight Against Utopia.  It has enough differences to say that it is a different novel, but let’s not buy into that too far.  Like in the earlier novel, an executive of the city questions the structure and command of the city.  He tinkers secretly in a makeshift storeroom with “forbidden” mechanics.  Like the main character in the earlier novel, this executive is reduced to apoplexia whenever a girl is around and has a libido that is out of control.  Just as in the earlier novel, the city is encased in a dome-structure and a good amount of the novel takes place in survival-mode outside of the domed city.

There are a whole lot more similarities between the novels, but I think those present a fair estimation of the comparison.  Don’t get me wrong – I think Mason should have re-worked Eight Against Utopia, because that was really bad.  However, I do not think Matrix is any better of an effort. I completely follow the storyline and I think that this could have been decent.  It could have been a readable, entertaining novel.  But somehow Mason just cannot write well-enough.  I’m somewhat embarrassed for him, I guess.

Joe Dill is an executive in the system.  He finds housing for the citizens.  He starts to believe something is happening within the domed city that does not sit right. So, of course, he decides to involve his secretary (Barbara Rowe) and they leave the dome and explore another domed city nearby:  Egremont City.  He returns home after a harrowing experience and discovers that the Matrix (the computer that governs the city) has found out about his rebellious thoughts and actions.

Part of the storyline involves the biomechs – these are people who have had their lifespan expanded exponentially because of mechanical and/or cybernetic modifications. Throughout the novel, Mason wants us to consider how an extended lifespan (near immortality) is actually ruination for humanity because it has bred a lethargic, incurious, stagnant humanity.  Mason talks at the reader about this (via Joe Dill), but it is not really fleshed out. A better author could have really explored this topic interestingly.  In some convoluted way, Mason ties this into the motives for Joe Dill’s escape, evasion, and battle against the Matrix.  I find it difficult to believe Joe is that concerned about humanity qua humanity.  I feel he just wants more freedom – and more freedom with women.

This is what had given the military idea such a long currency on the human scene.  There was a fierce and consuming satisfaction in it.  Outlet for aggression, that homed precisely on a basic strand of the psychological spectrum and had it vibrating. – pg. 95

Anyway, the book is sporadic.  The majority is filled with action-scenes.  To Mason’s credit, these are better than in the previous novel, but still not great.  In between are boring parts where the story rather stalls and sputters.  The chauvinism is still there, but maybe just slightly less than in the previous book. Not much less. Here’s a line with Dill addressing Barbara, who has joined their ragtag crew of rebels outside of the domed city:

Dill said, “You can make yourself useful right now and bring up some coffee.” – pg. 74

Anytime there is a female in the scene with Dill there are these sorts of comments or he has to pause to drool over her. It’s pathetic and ridiculous, most of the time.

One of the concepts that Mason kept from the earlier novel is the brain-connection between the overseeing system and the human individual.  Though hardly as present in this novel as in the other, this concept does play a role and is still the most interesting part of the storyline.  I have to share that there is a scene “straight out of a comic book” wherein Dill and Rowe are captured and the Matrix has robots hook the prisoners up to “porcupine-like electrodes” in order to establish links to their brains.  These links are where Mason’s development of the concept fails; he doesn’t know how to utilize this concept interestingly and solidly.

Well, overall another skippable novel.  It is just like Eight Against Utopia with a different cast.  Some minor differences. Still written poorly (so many people and things move “pneumatically” that it must have been Mason’s favorite word).  Once again, a better author could have done something with this landscape.  All I can say is that it does not require any brain power whatsoever to read.