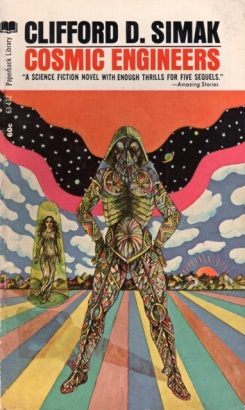 Cosmic Engineers by Clifford D. Simak (1904 – 1988) was published in 1950.  It was originally published as a shorter version in Astounding Magazine. I read a 1970 Paperback Library edition that I paid $1.00 for.  This is the first item that I have read by Simak, though I own a three or four other books with his name on their spines. This was a quick read, without any major brain drain.

The most important thing that I think you should know about this novel is that it is not at all like the contemporary science fiction that is pumped out.  This is not a dystopia. There are no zombies. And there is no anti-hero. Just because of these facts, I was tempted to give this novel four stars.  However, that is not really playing fair.  Anyway, what this novel does contain is big ideas; not great ideas, not specific ideas.  The ideas in this novel are epic. I would say they are universe-spanning, but that is actually understating the setting of this novel.

The writing is passable, nothing standout or odd for the time period it was written. However there are no beautiful, poetic flowers to quote.  Eighteen chapters of functional writing tell us a story taking place in the year 6948.  Time is a difficult thing to write about, I think. So, sure, even though it is the far-away future, many elements seem like the 1990s at their maximum.  For example, the mindset of the humans, the speech, a few societal items, etc. all retain that 1950s sort of flavor.

The novel begins by jumping onboard the space ship “Space Pup” with newsmen Gary Nelson and Herb Harper.  Their ship is nearing Pluto.  They have been sent by their circulation-driven boss to go through the galaxy giving accounts of life in space.  Here are a few of those temporal discrepancies.  In 6948 should newspaper circulation really be this important? And by this year are we really sure the readership would still be paying to read accounts of space?  Anyway, the two newsmen are bickering and grumpy.  At once the reader discovers that Simak’s characters will be very face-value, one-dimensional things.  Herb is treated as a happy-go-lucky goofball.  Gary is a bit cantankerous and a bit more intelligent than Herb.  The characters retain these qualities throughout and do not develop beyond this state.

Soon, the “Space Pup” locates a small, drifting older ship.  Gary, who is bored and grumpy, immediately decides to put on his spacesuit and investigate. This part is sort of eerie and is probably one of the more interesting segments of this novel. Upon breaching the ship, Gary discovers there is little of interest except for a large tank in one of the rooms. In this tank is a floating woman.  There are one-liner “instructions” here and there on the ship, which of course Gary follows.  The woman is released from her suspended animation and we learn her name is Caroline Martin.  She has been in this tank on this ship for 1,000 years!

Here is one of the first problems with Simak’s conceptual work in this novel. Caroline’s big “thing” is that she was physically in “suspended animation” while in the tank.  She had reduced her metabolism and physical functioning.  But she says she made one “mistake.”  Caroline’s brain kept working.  So, even though her body was powered down, she was not just asleep. Basically, she has just been contemplating for 1,000 years.  Obvious issues with this include:  brains require energy to operate (being in a near-dead coma-like suspended state wouldn’t let the brain work).  And this brings us to the epistemological “not her brain, per se, but perhaps her mind” sort of scenario.  Insert discussion on immateriality, etc. Also, compare with Ibn Sina’s “floating man” concept.

Anyway, by this point in the novel (chapter three) the reader should realize that he will have to be forgiving, suspend disbelief, and have a big imagination. I can understand that really empirical folk might dislike this novel, but this is an entertainment, not a textbook.  Nevertheless, this book still has a whole pile of outrageous big ideas to throw at us.  So, Gary, Herb, and Caroline land on Pluto, as they continue the newsmens’ “mission.”  Here they find some scientist-innovators who are planning to travel to the edge of the universe in a fancy spaceship.  Instead, they share that they are receiving odd communications that arrive via strange method. Of course, Caroline can understand them using her pseudo-telepathic skills.

These mental communications translated by Caroline are from the Cosmic Engineers.  They are sentient beings calling for help.  These beings request that the humans come to them and they are prepared to assist the humans in making devices that will allow them to travel to the farthest edge of the universe.  The whole reason is that there is great danger to the whole universe and the Engineers need the humans help to save the universe.

We know this is about to happen because beings in the other universe told the Engineers about it.

The solution involves going to the far-future (millions of years) Earth and seeking answers there. But this far-future Earth (on which lives only one elderly gentleman) is only a shadow Earth. Merely possible.  On the way back from there, the humans get waylaid by another species – a disembodied, senile mind.

So, I mention these things to let you be advised:  there are some wildly huge ideas here.  And even though this all seems ridiculously far-fetched and absurd (and it is!), there is a joy to reading science fiction that is on the far end of the spectrum of imagination.  I read so many novels where humans are challenged even just building a spaceship.  Or where a small segment of people putters around a planet dealing with “the same old stuff” that humans have dealt with for thousands of years:  food, clothing, shelter.  And I am tired of specific human stories, wherein we meet Bob and he earns redemption, or his bravery saves the day, or something similar.  Reading about the year 6948, wherein universes are about to collide is refreshing in its own way.  There is something wide-open about this novel that is endearing.

Critics might mutter under their breath about finally having a female character who is a brilliant and awesome – but being told it is the year 6948 before such a dame shows up on the human timeline. Others will howl at the ridiculous convolutions that Simak takes while playing in a multiverse.  Overall, though, I think it is important to look at this novel as one that at least tries to tackle a really, really huge playing field. Sure, at times it feels like a fix-up novel, but at least it can boast it has a huge panorama.