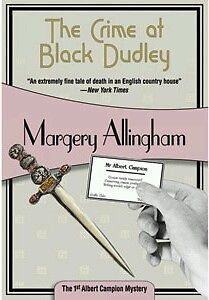 The Crime at Black Dudley by Margery Allingham (1904 – 1966) was first published in 1929.  It is the first of the “Albert Campion” mysteries written by the author.  It is the first novel by this author that I have read.  Overall, I was not terribly impressed.  The main complaint that I have is that the pacing for this story is uncomfortably off-kilter.  The main character, believe it or not, is not Campion, but a young Dr. George Abbershaw.

The story largely takes place at the Black Dudley, which is a large, rural estate owned by Wyatt Petrie.  The property has been in the Petrie family for some time, although in the distant past the manor was a variety of things including a monastery. Petrie allows his uncle, by marriage, to dwell at the property, entertaining the man by having “house parties” every so often.  These house parties consist of Wyatt inviting a number of his fellow young-academics over for dinner, drinks, conversation, and games. This story begins with Dr. Abbershaw finishing dressing in his room and heading downstairs for dinner.

Among the members of the party are Albert Campion and Meggie Oliphant.  The former is mysterious and annoys everyone constantly. The second is a red-haired young lady who Abbershaw is sweet on.  In any case, after dinner the group decides to partake in a game involving a ritual dagger. Its like hide and seek combined with hot potato. Wouldn’t you know, during the course of this game, someone gets killed….

Campion annoys the other characters, but I think the reader is supposed to be intrigued by him.  I was not very intrigued. I did develop a sort of tolerance for the main character – who is easily the most developed in the novel. Abbershaw’s deductions, though, are sluggish and tedious.  He’s very mature for the most part, until he’s around Meggie, who makes him in turns:  courageous, sensitive, and protective.  The relationship he has with Campion is actually the only way we get to learn anything about Campion.

There are many chapters where I was grumpy because the characters seemed so pathetic.  Many of those same chapters do not advance the storyline whatsoever, either.  And then, late in the novel, I found myself asking:  “why is this story still happening?” it just goes on and on and it really should have been ended long before. Also, the villains – both the specific and in the relation to a larger body of organized crime – are almost completely absurd.

Overall, it is difficult to be told that most of the characters are skilled, academic professionals and then also watch them act and think so stupidly.  Coupled with the unending circular plot and this novel just is not very good. Nevertheless, I think because it is the first novel in the series, one should not write off this author/series. I do intend to read another Albert Campion/Margery Allingham mystery. Just not too soon.