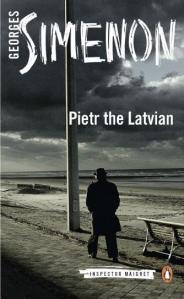 I finished Pietr the Latvian by Georges Simenon (1903 – 1989).  This novel is the first of the Inspector Jules Maigret novels and it goes by a variety of titles.  It was allegedly written in 1929, serialized in 1930, and then published as a book in 1931. Anything I have skimmed regarding this novel is certain to include a caveat to the effect that (a.) this is not Simenon’s best work; (b.) this is not the ultimate basis of the Maigret character; (c.) Maigret’s characterization was heavily influenced by the real Inspector Marcel Guillaume.  Such statements seem more important than they are. I do not see how a reader needs to be warned and petitioned for mercy before they actually read the book. Also, those facts do not seem entirely germane to the value of this particular novel.  I read this book – and this is the book that I will review.

Anyway, the next time someone asks me for an example of noir, I think I may suggest this novel.  It matches quite well with the judgment that I have made regarding the definition of noir.  I think a lot of people simply suggest gangster novels, crime novels, or gothic-esque novels.  However, this novel really exemplifies what I mean by noir.

The writing style of this novel is exceedingly spare and pared-down.  Absolutely no long-winded descriptions or grandiose pontifications on minor aspects of any element of the novel.  There are no chapter-long ruminations on any relevant (or irrelevant) topics.  In fact, there are definitely some points where I felt a little bit lost or perplexed. Maybe a hair more detail would have been okay.  Or maybe my difficulty was based on the age of the novel and the fact that I read a translation.  Not that this ruins much of anything at all, I am just being honest and considering readers approaching this novel as they would any other.

We meet Maigret straightaway in chapter one.  He is in his office with the pipe, which becomes as essential to him as his limbs, and the fire-blazing stove.  Maigret is reading telegrams and files regarding the movements and description of Pietr the Latvian.  Maigret is on the move fairly soon afterwards and what we need to know about him, Simenon tells us directly.  Simenon tells us that Maigret is a hulking, sombre dude.  He intimidates others, he does not make unnecessary speeches, etc.  We do not get to know Maigret’s internal monologue or thought pattern.  Readers will not watch Maigret link each and every facet of this case together like some sort of jigsaw puzzle.

At first Maigret meant nothing to me.  Just a bland and somewhat predictable detective.  However, in chapter eight, the character really grew on me and I found myself much more concerned for his well-being and pursuits.  All of a sudden, and maybe without a lot of finesse, Simenon gave us a more developed Maigret personality. It was rather obvious, but I don’t always need the convoluted approach, either.

Maigret worked like any other policeman. Like everyone else, he used the amazing tools that men like Bertillon, Reiss and Locard have given the police – anthropometry, the principle of the trace, and so forth – and that have turned detection into forensic science.  But what he sought, what he waited and watched out for, was the crack in the wall.  In other words, the instant when the human being comes out from behind the opponent. – pg. 38 Chapter 5

The novel contains a lot of characters and what seems like half-built plotlines and/or clues.  I do not know if this is because it is an early novel or because Simenon chooses not to get bogged down in every little detail and history.  While this can be confusing, it is also the source of a lot of the noir-feel.  Being a non-omniscient reader has its plusses and in a crime novel, it worked really well.

The dialogue format is probably the thing that will take the most work for readers.  Simenon does not write out every syllable of conversation – it is as if he almost uses just symbolic logic/keywords.  I can see this being annoying and a bit too bare for many readers.  On the other hand, I can think of plenty of readers who would be relieved that the actual speech of characters is reduced to necessary nouns.  Either way, I think this, too, makes the novel noir.

Regarding the actual crime – it is difficult to say how many there are.  Maigret gets the case due to a specific crime, but there is a lot more going on than just one incident.  And this is very relevant. The character whose role I really was not entirely clear about was Mortimer-Levingston. Throughout the novel he seemed very random.  Now, the ending of this novel was unexpected and definitely far from some cozy-mystery novel. I think the last few chapters bespeak a lot about the character Maigret and also the kinds of stories that Simenon was going to try to write.

This is a good novel and there is a lot of value in reading it and knowing about it. It is not a great novel. It is a worthy read and one does want to read more stories about Maigret.