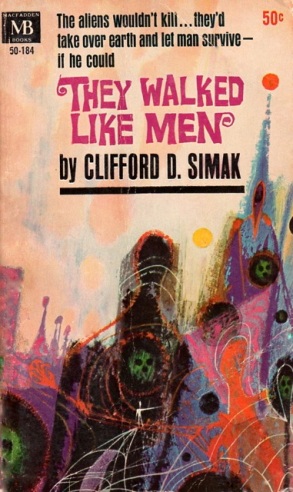 They Walked Like Men by Clifford D. Simak (1904 – 1988) was first published in 1962.  I read the 1963 MacFadden paperback edition – the one with the Richard Powers artwork on the cover.  The first edition hardback by Doubleday has artwork by Lawrence Ratzkin.  Generally, I really like Powers’ work, but on this cover the pink hues are too aggravating. Or, mainly, it just looks dingy.  I do not usually discuss the cover art – I’m not qualified to discuss art, really – but the Doubleday is worth mentioning because it really works with the story and keeps the cover simple and interesting.  It is one of those covers that I would have no complaints about if it were expanded into a small poster and slapped on one of the walls in my house.

This is the second Simak novel that I have read; I still own a bunch of others to work through.  Similar to my thoughts on the other novel of his that I read, I think that They Walked Like Men has a whole lot going for it, but also a lot that just seems too lame and too simplistic.  However, regardless of how grumbly and critical we readers might be, Simak is a good author and should not be ignored or dismissed.  Simak is an above-average wordsmith and is capable of coming up with at least one solidly fascinating idea each novel.

The opening chapter introduces the main character – who will also be our first-person narrator – named Parker Graves. I really appreciate the interesting manner in which we meet Parker:  he is half-drunk and standing outside of his apartment door struggling with his keys.  This section is really well written and I really enjoyed reading it. It immediately brought the setting and characters to life. Simak presents a situation with such skill that most readers will read further just to find out what the heck is going on.

Somewhere in the tangled depths of the half-dark newsroom a copyboy was whistling – one of those high-pitched, jerky tunes that are no tunes at all.  I shuddered at the sound of it.  There was something that was almost obscene about someone whistling at this hour of the morning. – pg. 15

To my mind, this novel has two sections.  The first quarter of the novel is full of eerie, scary suspense and tension. It has a heap of bone-chilling, heart-racing stuff that builds on the mysterious and unknown.  That’s the best horror stuff in my opinion:  the unknown.  (I’ve mentioned before that I am only a rookie regarding anything in the horror genre.)  Anyway, as I read that first chunk of the book, I really was surprised at how scary it was.  I think writing effectively frightening prose must be super difficult.  How can one make words transmit something terrifying?  Matter-of-fact style won’t work.  Purposely being obtuse won’t work.  So, I have to praise Simak’s work here. And I decided maybe I had read enough for one night to suffer plenty of nightmares….

I gave him the intersection just beyond the McCandless Bulding.

The light changed and the cab edged along.

What I think of as the “second section,” is really the rest of novel. Here is where Simak actually displays his hand, so to speak.  We learn what his “big idea” for the novel is and the creepy horror stuff is over as the novel takes a turn toward the action-esque side of things.  Light-action, if you please; there’s no Mack Bolan running around here. Also, the novel utilizes some ridiculous elements to tell the story.  I think if you took Simak’s “big idea” and then gave it to a far more serious and dark minded writer that the story would go one of two ways:  very, very droll and boring or it would retain a lot of the creepiness of the early part of the novel.

The “big idea,” by the way, is that the rather bizarre aliens are using economic pressure to control the planet (eradicate the humans).  Lacking in this is a lot of motive, or relationship of aliens to anything in the universe, etc. Without Simak’s writing skill, we really do have a novel about economics. Not too many folk will be racing to read that story!

Let me be honest, I do not hate the sort of ridiculousness that Simak then writes.  I am generally a magnet for the absurd and the ridiculous (sometimes to my chagrin). But I really disliked the transition between being horrifying and then just ridiculous.  I do not want to spoil anything, but I should probably share that there is a talking-alien-dog that helps the main character.

That is one of Simak’s big failures – he never fully and completely fleshes out elements of his story.  Things just are and even though they are extremely ridiculous – he doesn’t give us any causes for them. No reasons or answers. Now, maybe things are so ridiculous that to speak on them would make it all worse. On the other hand, the lack of explanation sometimes makes the story feel loose and that perhaps some of these elements are really extraneous and should have been edited out.

Finally, I really liked the supporting character.  Joy Kane is a co-worker of Graves.  She is also his sweetheart.  Unlike the majority of female characters in books dating from before 1970, Joy is quite awesome.  She is smart, sharp, witty, kind, stubborn, and realistic.  The novel is over and I do not care if I run into Graves again, but I am going to miss Joy Kane.