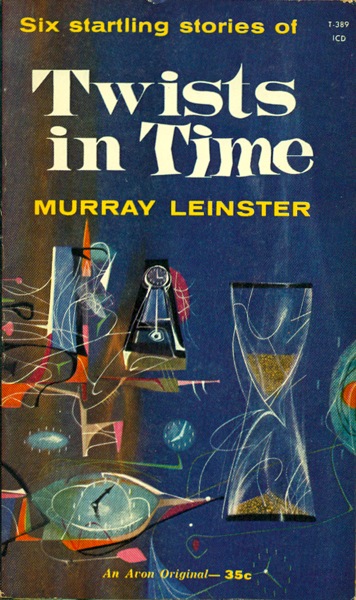 Twists in Time is a collection of short stories and novelettes by Murray Leinster that was first published in 1960. The cover reads “Six Startling Stories of Twists in Time,” but there are most definitely seven pieces in the book. It seems six of the stories were previously published in periodicals etc., but it is the first publication for the first story in the collection, Rogue Star.

Overall, these stories are generally unique and interesting stories. I have issues with stories that tackle time travel/concepts of time.  The thing is, there is hardly anything more interesting or exciting in science fiction, I suppose, than playing with concepts of time.  It is, indeed, one of the larger categories for story plotlines. Another is “first contact” stuff.  However, while playing with time is vastly interesting, it generally results in a big letdown for the reader.  Superficially, stories that twist time are exciting and seem to have endless possibilities. They are definitely filled with potential for fun and mayhem. But then you think about the science or metaphysics of the matter…. and all the fun gets smashed into little nibbets of “used-to-be-fun, but-not-anymore.”

Time is tough. It is unforgiving. And the allure of potential and smash-ups pulls authors in.  But the science/history/logic spits them right back out.  It is really challenging to find very good “time” stories.  Leinster’s work here is definitely unique. I think he has some very different storylines and he works to make the stories something other than carbon copy pulp.  Nevertheless, nearly every story tanks solely due to the time problem. Not that Leinster does not give it the best effort he can, it just is too demanding a topic.

Rogue Star is the first story, taking its name from an entity of “contraterrene matter with negatrons instead of positrons in the nuclei of its atoms, and antielectrons in the orbits where electrons ought to be. Consequently, its gravity was reversed with respect to Earth and Sol and all the normal bodies in the galaxy.”  On Earth, Cytheria is a old freighter spaceship that launches without its crew. In fact, only three persons are aboard at takeoff. Rex Hall and Marge Daly are basically minor crewmen that were not destined to launch with the ship. They were running final checks and such before the launch. They find themselves in space, captured by the seemingly mad Thomas Brent who explains much of the “science” in the story.

Marge complains: “I was so sure we’d run into self-contradictions —“  To which Brent replies:

“You thought of time-travel as like a ground-car on a highway, going north.  You thought you’d have to stop and back up to go south, and something similar to travel in time.  But a ground-car heading north, my dear, can make a U-turn and head south, though the police may protest.  We made a U-turn with the help of the Rogue Star and presently the galaxy will turn us U-fashion again, we will rejoin the traffic, only a great many cars or days behind what was formerly to our rear.”

Well, needless to say, Brent estimates they will be as far as ten-year back. That ends up being a ridiculously low estimate.  Anyway, this is the kind of time-travel work that Leinster plays with.  Now, I forgive him his 1950s physics, of course, and certainly, I am no physicist.  So look past what science doesn’t “work.”  Still, I like that Leinster at least acknowledges the fact that time-travel is screwy and difficult (Cp. Marge’s fear of “self-contradictions”).  But this is one of the better stories in the collection. Several of the others are definitely not worked out even to this level and the “contradictions” are not even nodded at.

Dear Charles is one such story where the time-traveling is a little bit confused.  The story is a little chunk of metafictional layers. The structure is the most novel part of the story, in my opinion.  A story written in the form of a letter is found in the 34th Century in an antique rare book at the University Library. It is addressed to a Charles Fabius Granver.  One of Charles’ friends finds this “story/letter” and brings it to Charles’ attention. Of course, Charles dismisses it as a prank or coincidence. But then the events of the story come true, so to speak.  In places, it was a little too non-linear for my liking and that detracted from the story. It is definitely a unique way to consider time-travel, but I am not sure it was polished to a really good mirror-shine.

The Other Now is the story I rated highest in the collection.  It is not so much time-travel, per se, as it is parallel overlapping realities. (I say with a blasé tone, as if that was a bland sentence.)  Jimmy Patterson is a rather normal fellow who is the survivor of a vehicular accident which killed his wife, Jane.  Leinster starts this story with the sentence:  “This story is self-evident nonsense,”  which is cool because it means that the author preempts the incredulous elements of all of these stories. Jimmy starts having eerie and out-of-sync experiences. Naturally, he doubts them (and himself) and takes his problems to his friend, a lawyer named Haynes.  The best part of Patterson’s character is that he is not immediately excitable and grasping at straws. He is dubious, sullen, and honest.  I have never seen the movie The Lake House (2006; K. Reeves & S. Bullock), but I suspect this is a much better, cooler idea than whatever that movie was about.  I liked this story because it has that subtle creepiness to it – along with a dose of melancholy and a pinch of satisfaction. This is the story to read and retain from this collection.

I wanted to give The Fourth-Dimensional Demonstrator four stars, but it just doesn’t deserve them. There are heaps of charmingly absurd elements in this story, though.  Indeed, as I was reading it, I felt like this is the sort of thing that would happen in my world. The whole thing is ridiculous and silly; probably not one the serious, grumpy reader should bother with. But Arthur, the kangaroo, is outrageous! He steals the show. No. The butler, Thomas, does. NO! The main character, Pete Davidson, is clearly the winner with his deadpan reaction to everything! Well, let’s just say the science is mauled in this one, but the entertainment is high.