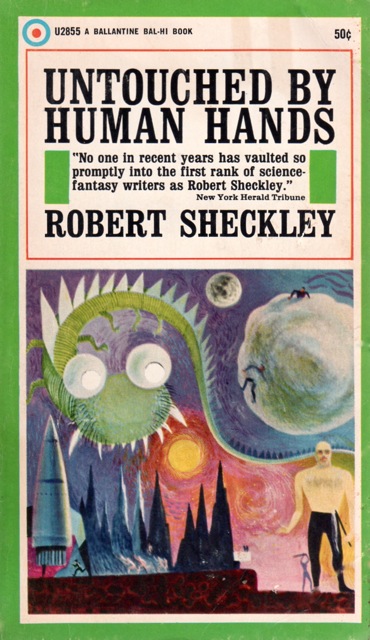 Untouched by Human Hands by Robert Sheckley is a collection of stories published in 1954. I believe it is his first collection published. I have also read his collections:  Pilgrimage to Earth and Citizen in Space.  Just like in those collections, Sheckley’s stories are witty, wry, unique, and very readable.  These were all published in 1952/53 so they were collected soon afterward.  The stories remain very contemporary and I could pass them off on unsuspecting non-science fiction readers as this month’s best stories.

On the back of the book is a short paragraph of praise comparing Sheckley to John Collier and Shirley Jackson. The blurb calls the stories here “delightfully fresh in concept, development, and writing.”  It is signed H. H. Holmes. Now some trivia:  H. H. Holmes is the assumed name of an infamous pre-1900 killer. It is also the sometimes used penname of Anthony Boucher (1911 – 1968).  Boucher was a well-known editor and reviewer of mystery and science fiction writing.

Several of the stories in this book deal with first contact scenarios – but not the usual “aliens invading earth” story. Therefore, as can be expected, several of the stories also hinge upon the ability or inability to communicate. I like this little problematic. Communication, miscommunication, and knowledge-sharing are key components in The Monsters, Ritual, Beside Still Waters, and Specialist. In each of these, the problem of communication is faced and dealt with differently; in some cases by using ingenuity of the characters’ wit to circumvent the issue.

I have seen that many readers liked The Monsters. I liked it, but it seems too obvious. I guess after you read enough Sheckley you start to expect more and better. It is a rather disturbing first contact environment juxtaposed with cultural habits. Sheckley presents it in a tidy, light amusing way. A good story, but I expect better!

Cost of Living is another story wherein the basic idea is okay as a topic/plot, but I just felt like the story was flat. Maybe a little too heavy on the morality. I am fine with authors using ethics as a skeleton in their work, but this was a little too shoved in the reader’s face. Maybe not pure ethics, but it contains that questioning society/guilt-factor that the reader is supposed to pause and consider. I did not like the ending, either. So I only gave this two stars.

The Altar is good average fare. It is creepy and puzzling and mysterious, which I like in stories. It may not be science fiction, though. It probably fits that other category – speculative fiction. Mr. Slater lives in North Ambrose, which is a small town where the residents find safety, security, and contentment in their very basic “plastic” lives. One morning, en route to work, he runs into a dark stranger looking for an oddly named place: The Altar of Baz-Matain. Obviously, Slater is at a loss and cannot help the man. Later that evening, Slater tells his wife and she says that she does not think the Better Business Bureau or the P.T.A. would allow such things in their town. Slater continues crossing paths with the stranger……… In any case, I enjoyed the story, the ending was a little less than perfect; I actually like everything up until the ending a lot more.

The stories Shape and Ritual are both average stories. They are both from the viewpoint of alien species who meet humans. The gulf in this meeting is pretty vast, so the humans are less characters than plot devices. In Shape, Sheckley gets a little bohemian on us and the main character alien questions the culture and habits of his species upon visiting Earth with his ship and crew. In Ritual, there is a small power struggle among two aliens regarding the proper way to welcome (using dance) the gods (humans) who have landed on their planet. In both cases, the alien race is the point of view and in both there is a questioning of the authority of the species’ traditional norms. Solid stories, but not much wow-factor.

The Impacted Man is my favorite story in this collection. I like that it is told from a “bird’s-eye view” as well as from a human standpoint. The “bird’s-eye” is a construction contractor who builds galaxies and meta-galaxies, which is really cool. He has built one and is demanding payment for it. The controller is refusing payment due to some anomalies and at least one impacted man. The impacted man is Jack Masrin (and by association, his wife and landlord). I really like the usage of parallelities in this story. And I like that this is sort of a lightweight-action story that kept me a lot more engaged than the other stories. This is good writing all-around and I found the resolution sudden and witty. I recommend this one to all readers.

Untouched by Human Hands and The King’s Wishes both deal with two humans facing a strange, difficult scenario. In the first, two rather annoying characters are forced to land on a strange planet in search of food. In the latter, a djinn-type creature appears in the humans’ appliance store and whisks major appliances away with him. In both cases, the humans face the serious damage to their lives/livelihood and seek out solutions. In the former, the two humans find a warehouse, but cannot comprehend the writing on the stores there in order to determine if there is food and potable water. They end up unleashing things that worsen their predicament. In The King’s Wishes, one human tries one method, the other human tries another. The solution is somewhat lame and the story fizzles out. Very readable stories, just nothing outstanding or vibrant.

Warm is easily the most esoteric story of the collection. It is also nihilistic, existential, and psychological. Unlike most of Sheckley’s other stories, this one does not contain any humor – and in places it is quite dark. In fact, if the reader is particularly existential, it has terrifying elements to it. Not for the casual science fiction reader and not for those who prefer action scenes. I found the “story” gripping and disturbing. Sure, there are some (let’s call them…) holes in the “plot,” but the general thing is creepy and metaphysically well-written. I feel like there are a lot of edgy writers who attempt things like this, but either try too hard or make it too heavy handed.

The Demons is a quirky story told from various viewpoints. I really liked the different viewpoints, no matter how brief some of them were, and I really enjoyed how the story just rolls around without seeming disjointed or confusing. It is a super skill of Sheckley’s that I have seen him use before. He combines elements without being plodding or chaotic, which keeps his stories light and fast. This one involves demons conjuring demons; sort of a twist on the rubbing of Aladdin’s lamp. Or “demons.” And the ending is a witty chortle. This is a really original fun story.

Specialist is a very unique story. I really liked it because the characters are so unique and the problem they face is one of those “usual science fiction space problems.” This story is another where the ability to communicate and understand foreign/alien cultures and norms is a key component. For whatever reason, I was drawn in to these bizarre characters who compose their cooperative “ship” and had concern for them. Generally, that means a well-written story. I even liked some of the seemingly sensible (or realistic) reactions the characters have. Definitely four stars.

Seventh Victim is a really unique read, too. It has a lot of things going for it. For one thing, its noir-dirty and not at all science fiction. For another point, it has a dose of resentment and criticism regarding the violent human race. In some sense, it is a partial “study” of drawing this violence out to the absurd. So, here again we have a strange cultural norm that has been established. Now, overall, the female characters in Sheckley’s stories are rather dumb and flat. Or just plain non-existent. However in this story, that changes a lot. And it changes in a wry manner, as well. The female character is just as stupid and simple as one would expect her to be in any vintage story by a male author. But that is not exactly how this one ends. Perfectly written.

Beside Still Waters is a very maudlin piece. It really is sad, although in a contemplative, gentle way. I do not know what to make of this one. The elements of communication are definitely there, albeit in a different way than just alien vs. human miscommunication. And the ending is far more serious than how Sheckley’s stories usually end. I’ve only read one thing comparable: Contraption by Clifford Simak. This is a good story, but only on rainy, introspective, lonely days, I think.

Overall, easily a four star collection. I read this Ballantine edition and I really think the cover is a hoot. Again, expand this cover to poster-size and I surely have a print of it on one of the walls around my home.