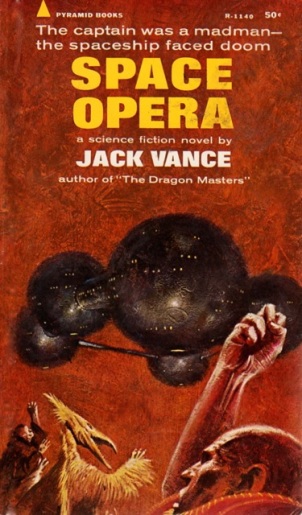 Space Opera by Jack Vance (1916 – 2013) was published in 1965. I read it this December and it is the sixth Vance novel I have read. I am also pleased that the first review of the year (and for Vintage Science Fiction Month) is a work by Vance.  I really like starting off the new year with the Little Red Reviewer’s Vintage Science Fiction not-a-challenge.  Usually, I only get two or three reviews posted; maybe this year I’ll do better?

Sadly, I cannot give this novel a glowing five-star big hearts sort of rating. Trust me, it pains me to give a Vance novel such a low rating. Nevertheless, in the vein of one of the main characters of this novel, we must not allow mere sentimentality to get in the way of our overarching efforts and goals.

I read the Pyramid Books 1965 edition. The cover art is by John Schoenherr and I think it is the best of the editions of this book. I love the dark red background.  Anyway, the title is a play on words.  ‘Space opera’ being one of those not clear or distinct subcategories of science fiction literature.  The term has a long and varied history full of opinions and redefining. It is a fluid concept that is, really, in existence mainly to give people something to endlessly discuss over coffee. Vance uses the term as the title of this novel in a more literal manner. He rather does mean space opera, i.e. off-planet musical performance.

Vance was an intelligent fellow. It was not possible for him to keep his intelligence out of his novels – and we would not have wanted him to do that. However, this means that sometimes his novels lose an ounce of fun and entertainment as a sacrifice on the altar of wisdom and intelligence. I am totally okay with this. Some readers dislike this.  For example, The Languages of Pao (1958) is really good; I gave it five stars. Many readers found it to be a slog, which I understand – linguistics/language can be very, very boring. (Yeah, Kripke and Salmon, we are lookin’ at you fellas!)

For Space Opera, Vance has come up with an awesome idea. I am really impressed and enthused and tickled by this.  The writing skill is also there – this is intelligently written with generally well-moving mechanics and structure.  There is also an unstated, but obvious, perspective on imperialism.  For this, too, Vance deserves praise because he did not succumb to a violent, aggressive, bitter tone about the dark evils of imperialism.  Instead, he just leaves it almost unstated and lets the reader have a laugh at the expense of the frustrated imperialist.  Tactful and witty, Jack.

Basically, a very wealthy older woman, Dame Isabel Grayce, has decided to gather up the best musicians (singers, orchestra, etc.) and pack everyone into a spaceship and go forth into the galaxies on a musical tour. Her motives are, mainly, arrogant and obnoxious. However, some mitigation is due her because she is quite honest. She is absolutely ignorant of her arrogance and her imperialism.  Her goals – in her mind – are to undertake a musical tour, bringing the expert performances of the human race upon earth to a variety of lesser-equipped, unfortunate, and less-advanced cultures/species.  This, in essence, for Dame Isabel, is a magnanimous gift which will enhance the lives of the foreign species and, minimally, open the channels of diplomacy and public relations to other planets/cultures.

Of course, in her mind, the other cultures/species cannot fail to be awed by the greatness and expertise of the opera company she has assembled. She admits, due to the backwardness of some of these cultures, they may not be able to fully appreciate the performances. Yet, she fully expects this tour to be a massive success. To her credit, she is neither quitter, nor lazy.

Naturally, the reader is generally repulsed by such blatant imperialism. They are supposed to be – but this is not a serious book, at heart. There is no debate that sort of imperialism is horrible. The reader should understand that Vance is setting it up not so he can knock it down (which would be too obvious and heavy-handed), but rather to amuse the reader endlessly with this operatic farce.  The fact that Dame Isabel takes the whole thing so seriously is part of the laugh – because it is that absurd!

It is important to share here that Vance knows his stuff, too. He does not fudge and fluff the details of this novel. He actually has Dame Isabel select specific operas and her company debate the best selection for their audience, etc.  And Vance is not just rattling off the titles of operas – he actually has put valid reasoning into the pieces mentioned or performed. Indeed, every time, I considered the proposed options and debated with myself about the pieces. Vance was intelligent and thank God for that! Needless to say, the reader familiar with operas is going to get more out of these details than the reader who cannot name a Wagnerian piece.

So,why did I give this novel such a low rating?  Execution.  There are a number of aggravating “side threads” that instead of enhancing the overall plot, actually compete with it.  For example, Gondar’s motives, or anything involving the girl Roswyn. Further, while Vance had opportunity to really make for some colorful and outlandish silliness (as would be expected in a farce) whenever the Tour meets a new culture, he drops the ball. The actual scenes are a bit stagnant and dull. This really sucks because these are the moments for the humor and the morality and the absurdity and the creativity to flourish. Finally, the novel ends without much resolution, with the plot having become somewhat stalled and repetitive, and the characters really just flatlining. Dame Isabel is as ignorant as when the tour began. The last chapter is stupidly focused on the very minor romantic subplot.

Overall, I can only give this two stars. I truly appreciate Vance’s intelligence and effort, but in order to make this work, it needed to be far more vibrant and creative.  It stalls out and gets boring in places. I wish it were better executed, because the idea is awesome.