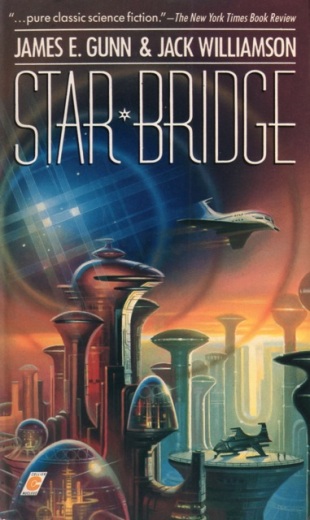 According to Wikipedia, Star Bridge was originally the idea of Jack Williamson (1908 – 2006), who wrote about a third of the novel and set out the remainder in some form of outline.  Allegedly, James E. Gunn got involved with the novel and finished the writing.  This information on Wikipedia is sourced from the January 2007 Locus article by Gunn. Needless to say, I have no idea how true any of that is.  However, after reading the novel, it does feel a little choppier than one would expect. Anyway, the novel was first published in 1955 and republished a couple of times by different publishers. I read the 1989 Collier Nucleus edition with cover art by Alan Gutierrez.

The novel has twenty-one fairly short chapters.  There are also very short interludes which are something like an outside viewpoint commenting on the events detailed in the chapters. They are presented as “history.”  From the first, the reader is told that Eron is the greatest empire ever and that it has/utilizes the Tube.  The reader is also told that “Empire is communication.” (pg. 1) The Tube is the Star Bridge.

The first five chapters seemed very sluggish. In fact, the first chapter had me raising my eyebrows a little thinking that this was not what I expected.  Perhaps the first five chapters were not really sluggish, but they seemed to be written in an unfamiliar style.  Throughout this opening chunk, I was unsure if this novel was going to be more of an action-thriller or a pondering, roaming sort of thing. Everything opens up, let us say, in chapter six. I mean, once an assassination takes place, of course things get chaotic.  Chapters six and seven are, at once, very well written and also frustrating. They are well written when they focus on the emotional turmoil of the main character, Alan Horn.  It is almost as if the reader can feel Horn’s panic, stress, and doubt.  Yet, there is a lot of this chapter that is not so well done – a feeling I had about the first five chapters, as well.  Somehow the environment/setting is not described sufficiently.

It is one thing to tell the reader that it is nighttime and there is a desert. However, if you are going to have the reader chase the character(s) through caves, into megalopolis structures, and around vast technology, you have to believe the reader is not as familiar with these things as the characters themselves.  I think of Jack Vance; when he describes a setting or technology or mechanics – I think that the reader could practically build whatever is being described.  You know how the device works and how the landscape looks.  In Star Bridge, I feel like there are general ideas that smart readers can understand, but they are choppy and do not (at least for me) result in a full diagram in the imagination.

On this point, Eron, the planet which is the hub for all Tubes, is covered in some sort of structure, because it is an old and used-up planet. It exists only as a seat for the Empire’s directorship and as the hub of the Empire. However, when our main character arrives there, it seems like he navigates the place quickly. I mean, within hours. So, this must also be a very small planet. However, that’s not the sense that the author(s) give, either. So, basically, I just focused on the “action” and “philosophical” parts of the novel and gave up actually following the path of the characters through the Empire.  Our first exposure to usage of the Tube is interesting and the experience of Horn is related in a decent manner, but I feel like PKD could have really rocked our brains. So…. good, just not great.

There are two aspects to this story.  Overall, it is the story of the many poor versus the empowered few. This is the juxtaposition of freedom and dependence. The second aspect to the story is the discussion wherein Horn (and the reader) question to what degree individual choices/actions are free/independent.  At many points it is suggested that the answer is different for an empire than an individual.  At other points, there is a hint that maybe the same forces affect both, just not with results that occur in the same time ratio. Simply, what is the catalyst for a man’s actions/choices?  What is the catalyst for an empire/society’s actions and goals?

One of the elements that this novel does well is how there is a layered mystery of power.  Several times the “true hand” at work moving events and people is revealed….. and then is shown to be only a puppet for a deeper more removed hand.  In a couple of cases, one of the empowered actually is unaware that they are merely puppets.  This stuff was creepy, and the intrigue and “unknowable-ness” really gives depth to the novel. Of course when dealing with power, there are lots of ways to look at the situation and lots of segments of society with their role to play.  The novel does touch on a bunch of them, but it is still a short (215 pages) novel and just does not have the length to examine each one of these roles.

The novel most similar to this is Asimov’s Foundation.  One of the similarities is the disinterest the reader develops for the characters.  After awhile, Horn seems superhuman and “too awesomized.” And those that help him are  stereotypical. (For example, one particular violent character wears black and has snarling overgrown dogs.)  I really liked Foundation and I liked this novel…. I will always have more interest in the macro than the single individual. It is interesting that this novel does an okay job of making the reader look at both simultaneously.

There is a lot to enjoy in this novel.  Unfortunately, I think the execution suffers a bit. Also the length. After all, it is not often that I actually wish a novel was longer; usually I am complaining that the author did not know when to end the thing! Well, this book could use another hundred pages and it would be a definite four-star rating.  As it is:  a standard action novel with sporadic choppy writing – three stars.  It is a good novel, though. I would not want readers to think that this is something to be skipped just because it is not perfect.