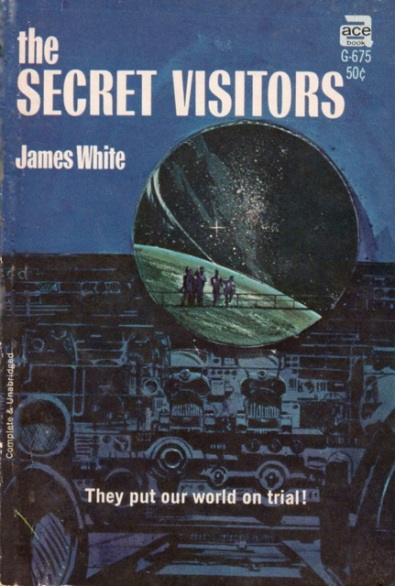 The Secret Visitors is James White’s first novel, published in 1957. I read the darling ACE edition that has tiny font that hurts my eyes. Cover by Schinella (???).  However, it should be noted that it was originally (at least parts of it) serialized in 1956’s New Worlds Science Fiction publications.  This is significant because I am allowing for the storyline to have been originally meant as a serialized work, digested in segments, and perhaps mauled a bit when put into novel format.  And it is White’s first novel. (Another attempt at presenting mitigation.)  Because, folks, this one is a stinker.

Anywhere on the Internet where you find someone giving this novel either four or five stars as a rating, you need to discard that person’s review/rating.  They are lying. Seriously, there is no way, that I can see, in which a reader can give this book anything higher than a three star rating. And, frankly, in all seriousness, I cannot really imagine anyone giving it that many stars.

Now, I have read a very good White novel ( The Watch Below ) and also a decent, endearing story ( Hospital Station ).  I have also heard rumor of some other good pieces by White. This, novel, however, is not good. I suspect that any good reviews it has ever received are out of sentimentality or because in this novel readers discern the germ out of which grew White’s best works.

The novel begins in media res in such a mess. Starting in media res is a frequently used method of beginning a story. However, authors who utilize this, need to pull it together and sort out the mess in a cogent way.  White gives the reader just a little bit more, but it is unsatisfying and still seems random and rushed. By chapter VI, though, it really just does not matter any more.

A big issue with White’s storytelling, in my opinion, is that he spends most of the work telling readers what is.  By this I mean that he does not explain or give any background. He presents a world of current-time facts. So, readers do not know how anything got to this point, the background on anything, the reasons for anything, etc.  Some of this is okay – and PKD is a master of pulling this writing style off with charm.  However, White just seems like Cratylus pointing at facts.

Lockhart, a doctor, races over to a body on the sidewalk. He is supposed to…. do something medically. Simultaneously, Hedley (an Intelligence Agent) is nagging him and shooing away bystanders.

Then, we are in hotel rooms. We meet “the girl” and several other wooden characters. A professor is there, he is apparently an older gentleman because he is cantankerous and does not fit in with the others. There are a couple of hazy, confused scenes in the hotel. Fistfight and then a needle stabbing? (I’m mad about the Cedric character – he is the worst-written, ill-explained, incomprehensible part of the novel.)

Lockhart is suddenly playing the rôle of tour guide for Kelly (the girl).  She is hideous and annoying. At first she really vexes him, but then he falls in love with her? I’m at a loss for this chaos.  Here, at least, we are given some information about the actual storyline. Apparently, there are off-worlders who are bored and our planet has stuff. So, they like to tour our planet and collect photographs and music and postcards.

Oddly enough, according to Miss Kelly, Earth was the only planet that changed its seasons, that had so infinitely lush variety in its flora and fauna, that was capable of producing such rich music, such gorgeous scenery.  No other inhabited planet had an axial tilt; this meant that the other worlds had no change of seasons, that their plants and animals had never had to adapt to changing circumstances, thereby producing variety.  Consequently, their inhabitants found the other worlds unbearably dreary and monotonous, while Earth would have been a veritable tourists’ paradise. – pg. 40, Chapter Four

Can you spot the dozens of logical/reasoning/scientific errors there?
Anyway, the story continues to a nearly-indecipherable scene on a beachfront with the landing of the off-worlders’ ship.  Suddenly, everyone is mentally and physically all good with hopping on the ship and heading into space with off-worlders. Aboard, we learn there are strange clothing, customs, and political machinations.  There is an interesting interlude wherein on a planet an alien body is ruining the planet and Lockhart becomes a hero by playing doctor.

Scenes take place involving guns and even a little kid with a water gun.

A weird trial occurs when the ship finally reaches its destination planet. Turns out the earthlings were doped. The little kid saves the trial. But it does not really matter because we have to have a space-navy battle. Hedley, at this point, is completely beyond any reader’s connection to character. And Lockhart decides on his “life’s work.”

I want to give this 1.5 stars. I guess I can give it two…. because the scenes with the “Grosni” are worthwhile. So, only read this if you are a White fanatic. It was a rough time reading this one.