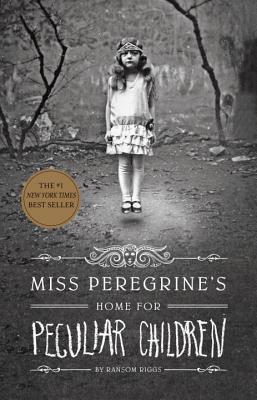 I recently read this novel – but have been sluggish about writing the review for it. My household *had to* read it because of the forthcoming MOVIE.  And, frankly, it has gotten plenty of good reviews on the Internet. Well, I think the main reason for my tardy review is simply that I was quite disappointed with the novel.  It was originally released in 2011 as Ransom Riggs’ first published novel.  Like a number of novels I’ve read in the last year, this one is a little non-traditional in its narrative.  The author developed the novel around vintage photographs that he found/collected. Allegedly.

I find it difficult to believe that one (the photos) truly preceded the narrative (novel).  I think, maybe, its more likely that the photos had some characteristic that the author focused on and then worked the story by bouncing back and forth between novel-writing and photo-gazing.

The novel is good and dismal and creepy and rather horrific for the first quarter of its pages. I think this is well written and the voice of the main character, Jacob Portman, is  realistic and honest. I was, however, surprised at how much the dude cusses. In a “young adult” novel it was a bit much. In any case, I did think the novel had a strong main character, some solid creepy elements, and a good setup.

But as the novel progressed, things started to fall apart. Mainly…. time travel. Oh my goodness doesn’t this trip up every author, screenwriter, and playwright. So, there is a basis of time travel – and it is an acceptable level of suspending disbelief. However, for whatever reason, I felt like the author kept fiddling with the concept and trying to tweak it just so. Instead of enhancing the setting of the novel, it made it convoluted, confusing, and a bit dumb. I want to write the sentence “the time travel didn’t make sense,” but obviously that is heavy with meaning already. I think Riggs just kept mauling the time travel element so much that it ends up just being a frustration.

The main character’s family is a wreckage. Once again, in handling these characters, I think the author went too far. He overwrote them and their troubles.  It is perfectly fine to have a character who has some struggles, but for this genre and for supporting characters – this was just too much. Maybe this is a nitpick? But honestly, I truly disliked Jacob’s father as the character seemed unrealistic and overdone.

But, worst of all, the title character, Miss Peregrine, is the biggest disappointment. I wanted her to be awesome. Like Professor X (sure, the Internet has its comparisons!), but more snappy and Gothic. Instead, she is really weak and lame. And useless.

Now, I have seen that in the movie the character of Miss Peregrine will be played by Eva Green, who I think is a striking actress/model. (I do know her from Mont Blanc and not from Penny Dreadful.)  I think Green is a good choice for the character – her visage, plus the way she easily handles camerawork, will make the character a lot better than the weak thing we find in the actual novel. At this point, she is a main reason to see the movie:  making characters stronger by being better than the characters themselves.

Overall, I do think I will read book two. I don’t feel a deep need to continue in the series, but I read things, so what’s another book?  Nevertheless, this is a darker read and a larger disappointment than I’ve read in awhile.