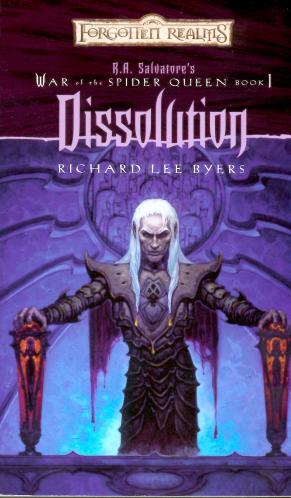 Dissolution by Richard Lee Byers is part of the large collection of Forgotten Realms novels.  I think that the dark elves, or Drow, are the most famous creations of this expansive franchise. This novel is book one in a miniseries of novels that contain the tale of the “War of the Spider Queen.”  Byers was carefully selected by managing members of the Forgotten Realms franchise to write this first novel in the miniseries, by which it was hoped new readers could approach the mythology and old readers would re-kindle their love for the franchise.  This first novel was published in 2002 and five others followed afterward, each from a different author.

I have not read much in the Forgotten Realms collection. I read, at least, the first two (very famous) novels in the Drizzt Do’Urden subseries; that would be R. A. Salvatore’s Homeland and then Exile.  I do recall reading some of the third Drizzt novel, but I honestly do not think I finished it. Based on the internal chronology of the franchise, the War of the Spider Queen novels occur just under a hundred years after the first Drizzt novel (Homeland) takes place.

Generally, I get the sense that these huge franchises of novels/games are looked down upon by the “reading elite” as hack/pulp meant solely to feed some stereotyped awkward love for these genres.  Somewhat like a soap opera for teenagers, I suppose.  I do think this is a prevailing opinion, but I do not think it is completely true. Sure, in every genre there is a grouping of zealously loyal fans.  However, when the fans are not in adoration of the most literary or academic pursuits, there does tend to be a negative view taken.  But there is a simple joy in following these serial, melodramatic (and often formulaic) fantasy-soap operas.  And, whether people like to admit it or not, there are some great creations that come out of these large franchise series.

The Drow, or dark elves, are one of those really interesting creations. If you think of Forgotten Realms, you will have some thought to the dark elves. They are something like – though I hesitate to push the negative analogy too far – the opposite of the stately and high-minded elves brought to us by J. R. R. Tolkien. Now, I know Tolkien’s elves are hardly original, but his representation seems to have supplanted the older Germanic/Scandinavian conceptions.  So, the Drow live in the Underdark (underground) and have a matriarchal society infused with magic.  It is hardly an amoral or anarchic society, but the rules are very much based on ambition, political power, uneasy alliances, and treachery. Love, compassion, mercy, and trust are not really parts of this world. Naturally, this is what makes these dark elves so dang interesting in any storyline.

Byers was elected to write the opening novel in this miniseries that is entirely focused on the Drow world. The storyline is vast and complex and he had to leave a lot of room for the following authors to work, while giving them a good footing. And so the majority of this novel is functional and introductory.  Byers gives us specific examples of the Drow behavior and activities.  Then, he begins to follow a couple characters specifically and begins the subplots.  The reader bounces back and forth between a variety of characters, some of these are more interesting than the others.  I will say that for the first half of the book the thread following Pharaun Mizzrym and Ryld Argith seemed stupid. It was the part that caused the most aggravation in my reading.

Finally, just past the halfway point, the Byers started to bring some of these threads together.  Finally, what seemed like pointless roaming in circles actually started to converge.  This was good because it was getting to be a real struggle reading along.

The only character – from start to finish – who I found continuously interesting was Quenthel Baenre.  Quenthel is a Drow priestess; in fact she is the Mistress of the clerical school in the dark elf city. Throughout the novel, I found myself following her exploits with more interest than those of the other Drow.

The last third of the novel gets quite intertwined in combat scenes, monsters, magic, and Drow treachery.  And, I will say, there are several scenes in this novel that are a bit darker and more gruesome than one would expect in franchise-owned pulp.  The novel serves its purpose – one does want to read further in the War of the Spider Queen and the Drow remain dark and treacherous. Overall, Byers does a solidly adequate job. But nothing here is beyond what one should expect and the novel has some awfully sluggish sections.