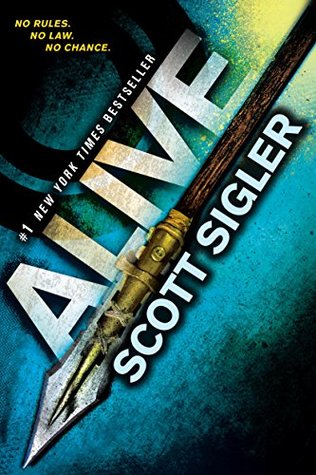 Alive by Scott Sigler is the first book I have read by this author. It was published in 2015 as the first book in The Generations trilogy. It is marketed towards a “young adult” audience.  However, there is a lot of gore in it. I might be totally off-base, though. I mean, I have no clue what young adults read or are capable of reading. It just seemed to me to be a little heavy on the “blood & guts” part. At least that is how I usually refer to those elements. So, take heed all of you with sensitive imaginations!

This book has a famous last page wherein the author begs readers (particularly those who use social media) not to put any spoilers out and about. Because everyone deserves a fair shake at the novel’s surprises and plot twists. I think its a noble request and a good idea and I will agree to it.  Although, I believe there is an ulterior motive to it. That being said, please understand if this review seems a bit vague.

For the most part, I like all of the characters – in the sense that qua characters they drive a good storyline. I do think that the plot is confusing – even after some of the reveals. There are some questions and difficulties that, even though I think we should have gotten them resolved, don’t seem satisfying. But, it is only book 1 of 3; maybe more answers are forthcoming.

The overall sense of the book is suspenseful, dark, and tense. The author does a good job with the tone of the thing. However, when it comes to descriptions where explanations are being made – its sketchy. The explanations are confused or just seem jumbled a bit. Not to the point that they become unreadable, but that it requires more patience than I think it should to get through some of these sections.  Descriptions and explanations should help, not make things more confused.

I gave this four stars because I felt that it was unique enough in presentation (if not in actual plot) to merit that. To be honest, the novel deserves a 3.5 star rating.  However, I do not use half-stars, so I bumped it up to four.  The main reason I was tempted to keep it at three stars was because there is a very…awkward obsession with breasts. Yeah, I know that sounds super odd. And if it sounds odd – trust me, it is because it is odd. However, this recurring factor is at least not constant and can be overlooked when it occurs.

That being said, I appreciated the inner monologue of the main character, I appreciated the suspenseful tone of the story, and I enjoyed the process through which the author made the big reveals.  So, presentation gets the glory here.

I wonder about the gore-level; it is slightly heavier than a lot of novels that I have read, so the fact that this is a young adult novel makes it surprising.  On the other hand, the gore, is relevant to the storyline.  Most of it (not all, mind you) seems relatively reasonable to the plot of the novel.  Ultimately, this novel focuses on how the characters must survive.  I do not think that is a spoiler. Survival is not uncommon a theme. Survival is also, generally, messy. But not all young adults – or adults, for that matter – want to read such tense and messy entertainments.

There are a couple elements that I dislike about the novel. However, per the author’s request, I will not share them. I feel his request, while sensible, also reduces negative comments as-well-as general spoilers. Thankfully, the elements I disliked are not large enough to ruin the novel. However, let it be stated now that a lot is on the line with book two. The bar is set high for the second novel in the series and if the author fails to carry through, it really will make this first novel seem much worse.