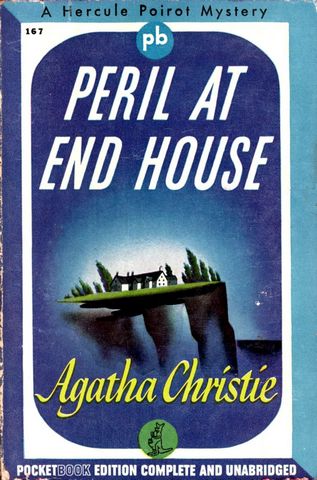 Peril at End House is my latest read Agatha Christie novel. I read The Mystery of the Blue Train earlier this year, but I did not write a review. That is the sort of novel that does not really need to be looked into any further. Christie’s personal troubles during that novel do seem to have spilled over into her writing of it – it is not a very good novel. There really is not much I can add to what has already been said about it dozens and dozens of times. However, Peril at End House was very good and seems to represent Christie back to form.

Peril at End House was published in 1932 and it is the sixth novel featuring Hercule Poirot. The story takes place in Cornwall, which is a place I have never been, but suspect would be nice to visit. In other words, I am immediately more kind to a novel that is set in a location I am interested in. Hastings is in this novel, too. He was sort of written out of the novels for awhile, so the fact that he is in this one makes me a happy reader.

There is an involved and heavily-populated storyline here. Lots of characters, it seems, which means a lot of suspects.  But I think a strong argument can be made that a large part of the novel depicts the relationship between Poirot and Hastings. I hesitate to say that in 2017. Makes it sound untoward. Poirot is very insufferable in this novel – to those that find him annoying. No matter how obnoxious or arrogant he is, Poirot never seems to get on my nerves. However, I can see how he vexes others, including Hastings. The interactions between Poirot and Hastings are often the best parts of the novel. I do feel bad for Hastings – whenever he gets the upper hand on Poirot, Poirot quickly redirects their attention to something else instead of conceding defeat.

Hastings is so naive and harmless, sometimes I wonder how readers are not more annoyed by him than Poirot?

“You would say that! It would appeal, I know, to your romantic but slightly mediocre mind. Buried treasure – yes, you would enjoy that idea.”

Poirot is tough on him, but only because Christie is trying to be tough on the reader. Hastings sometimes represents that reader that wants their stories to be as fantastic and outrageous as possible. On one hand a reader seeking for wild entertainment and romantic elements – on the other, Poirot seeking methodological deductions. Describing Hastings to another character (in front of Hastings), Poirot says:

“He is, to begin with, reluctant to see evil anywhere, and when he does see it his righteous indignation is so great that he is incapable of dissembling.  Altogether a rare and beautiful nature. No, mon ami, I will not permit you to contradict me. It is as I say.”

That does describe Hastings perfectly and succinctly and it is significant to note that Poirot calls this both “rare” and “beautiful.”  Its also aggravating and appalling. But Poirot seems to enjoy having this personality around him, even though it frustrates him. Just as, we know very well, Hastings is sometimes thoroughly frustrated with Poirot.

The situation in the resort town St Loo is that it seems someone is trying to kill “Nick” Buckley. Buckley is a rather rambunctious young lady who has ownership of End House, a dilapidated old home around which the resort area has developed. Buckley is called “Nick” as reference to her grandfather, who owned End House, and their close relationship.

Nick has a number of guests, friends and acquaintances, that seem to revolve around her home. The lives of these folk has a rather bohemian feel to it, they are all in this little town drawn there because of some connection to Nick, but yet, it does not seem that they are really there because of her, either.  There is a feeling of lazy, youthful socialites.  This is the most difficult part of the novel for me:  why are all these people here? It feels like some weird parasitical group-up with these people.

Christie pulls off something like what she did in The Murder of Roger Ackroyd, but not exactly. It works, though, because it does suit the character’s temperament, making it seem genuine and obvious. In reality, Christie is really skilled at making the reader fall for whatever she wants them to. The reader will follow Christie like a lemming and then be surprised whenever Christie pulls the curtain aside.

Overall, the storyline is interesting, the characters are really well written and distinct, and Poirot is totally obnoxious. It is not the greatest mystery ever written, but it is a charming read.