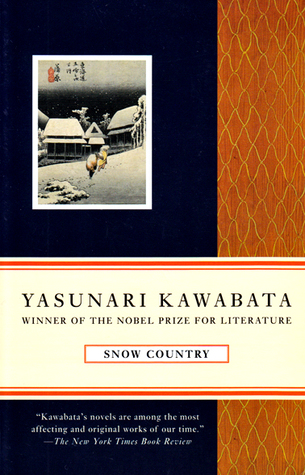 Snow Country by Yasunari Kawabata (1899 – 1972) was published in its finalized form in 1948. I read the Vintage International edition translated by Edward G. Seidensticker. This is the first Kawabata novel that I have read, though I own several. Kawabata won the Nobel Prize for Literature in 1968, which made mention of Snow Country and two other of his works. His Nobel Lecture was entitled Japan, The Beautiful and Myself and I do want to take a look at that. There is an annual prize in Japan awarded to the year’s most accomplished work of short fiction. The Kawabata Yasunari Prize for literature was established in 1973 by the Kawabata Yasunari Memorial Association to honor Japan’s first Nobel Prize–winning novelist. The winner receives a certificate, a commemorative gift, and a cash award of one million yen.

So much has been said/written about this novel that I doubt I can add much value to the overall volume of commentary. I did not love the novel, but please, do not assume I am a lazy or stupid reader. I really wanted the novel, with it’s poetic and spare writing, to grab my heart by it’s beating valves and drag me around the mountains of snow country.

Disappointingly, that did not occur. Broadly, because I deeply disliked both main characters. The writing is quite good and scenic; it envelopes the reader. But the sloth and decadence of Shimamura and the annoying voice of Komako killed the wonderment of the writing. I don’t forgive them for that.

However, I cannot say that I disliked this novel.

Kawabata’s Nobel Prize was awarded “for his narrative mastery, which with great sensibility expresses the essence of the Japanese mind.”  This sort of statement sometimes makes me grumpy. The thing is the definite description there in the phrase; the “the” that causes issue.  At once we are to recognize The Other and embrace diversity – therefore keeping the independence of The Other, but yet we are also expected to support and enjoy the fullness of the universal human experience.  So, what is this “Japanese mind”?  Even if we assume that in 1968 they did not choose their words so nicely, is there a “Japanese mind”? A mind so in tune and vital that it is quite simply separate and distinct from all other human minds? Or is “Japanese mind” merely a euphemism for “experience produced within Japanese culture”?

I felt that the writing was very good for most of the novel. I mean, there are places where I was less impressed. But throughout, the actual writing – and it has been likened to haiku and poetry many times – was very good. Its a spare prose with a pseudo-poetic feel. Again, some of the greatness may be reduced because of translation.

Above all of that, I could synthesize with the feelings in the story. It is hard to choose the correct words here, so let me keep trying. I do not mean simply that I sympathized/empathized with the characters, but rather that I feel that I have also experienced those feelings. Feelings, though, is also the incorrect word. I mean, something deeper – something like the relationship to the milieu. Or, more like the ennui of the whole scenario. Or, perhaps better, the Russian term тоска́/toska. Observe what happened here – I was unable to find the English word and had to dip into different languages.

Is this a love story? No, I do not think so. Allegedly, Komako falls foolishly in love with Shimamura. I must have missed that part. Please do not tell me it is “between the lines” or that the reader has to supply this. I missed that part because it was not there and it could not happen. Shimamura is thoroughly unlikeable and I doubt the young geisha could see anything of value in him. His heavy ennui drips down every page of the novel and he is truly a shameful character. Not because of his morality, per se, but because he is so wretchedly slothlike. Much has been commented about Shimamura’s dilettanism, yet I don’t think this is his defining characteristic. I see him as sluggish and oozing his upper-class ennui.

When Shimamura goes for a massage, the woman says: (pg. 59)

“No stiff muscles on me.” Shimamura replies.

I find Shimamura repugnant. His conversation is also lazy and slothful. He repeats phrases and seems constantly hazy on the conversation. Komako is just as frustrating. Her conversation is immature and ridiculous. Much of this is because most of the time she is drunk (she is a geisha and must attend “parties”) or because she is acting as her age dictates. Still, I find her to be annoying, at best.

For example, often Shimamura is depicted looking out at the mountains and trees. He vaguely ponders the autumn leaves or the skiers. He has lazy daydreams about the grasses and snows. In fact, several times he wanders listlessly, but yet cannot seem to really ever become “one with nature.” There is always the distance as he stands in the inn, by the screens looking out at the scenery. Basically, this is a metaphor for all of Shimamura’s distances.

Overall, if you can stand a novel filled with ennui and distance, this is a perfect representation of that. I mentioned above that this is not a bad novel, I did not dislike it. But I was not convinced all of the time. What I was drawn in by was that heavy-headed fuzziness that sloth and bad schedules and long winters come with. And that is not a feeling I have ever relished.