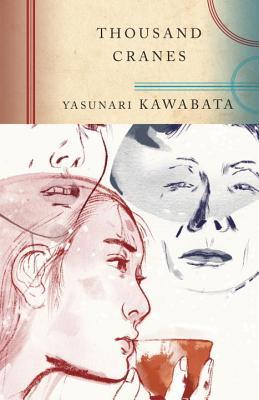 Thousand Cranes by Yasunari Kawabata (1899 – 1972) was published in 1952 and in English in 1958. It is the second Yasunari Kawabata novel that I have read. I disliked his main characters, however, in this novel they do seem to possess a measure of realism. I felt that the characters in Snow Country were not realistic. While this is a speedy read, one can finish it in a day, it is not really an easy story to penetrate. There is a great deal of native culture within that can keep non-Japanese readers at bay. Further, this entire novel is very much focused on human interrelationships and their responses to each other. For some readers, this could be challenging.

Wikipedia’s entry, in very forthright style, explains precisely what this book is about. This means this, that means that. And while some of that is probably true, I think there are deeper and more complex interpretations possible.

The storyline, the characters, and the other general dimensions of the novel were not anything I was particularly drawn to. It is quite a dramatic work and does not immediately appeal to any of my major interests. As I mentioned above, this work is very heavily focused on human relationships. The defect is in me, clearly, because I am usually disinterested and bored and even confused by novels like this. Autistic. Russian. I have a hard time with some aspects of stuff in this genre. All of this being said, though, I will admit wholeheartedly and very profusely that in this novel, Kawabata’s skills are on showcase. In a sense, I feel this is almost a brag novel – Kawabata knows he is that good of a writer and he is showing off. He is an excellent novelist and even if this particular storyline does not appeal to everyone – the skill with which it is written is undeniable.

Do not suppose, however, that this novel is arrogant or that it is over-the-top with writerly flourishes.  Perhaps in its minimalist oh-so-Tanizaki/Japanese manner, it is precisely what it needs to be:  no more and no less; and Kawabata deserves all the praise he gets for it.  He proves himself an acutely aware, highly sensitive, perfectly edited, writer. He is a master-writer.

Layered upon the story are tea ceremony items and elements of Japanese aesthetics, specifically pottery. This would be best understood by someone with familiarization with such topics. To some readers, the frivolous and fastidious obsession with which tea bowl to use, which vase, what tokonoma flower, may seem massively tedious. I was able to assimilate my personal cultural experiences fairly easily and completely empathize with the discussions of the tea items etc. To some people, such concerns seem “petty” or “decorative” as opposed to practical. The tea ceremony is such a THING, though, that I hardly know what to say about it. From its origins, to all of its iterations throughout history, and from the praises of it, to those who scorn it… whatever one thinks of it, it is not something to merely hand wave at.  Yet, I struggle to discuss it.  Regardless, if someone were to ask me about the tea ceremony, I do think I would recommend that they read this book. It sort of provides a situation for the whole process without directly confronting it.

Like the back of book says: “a luminous story of desire, regret, and the almost sensual nostalgia that binds the living to the dead.” Again, this is going to be felt more by a reader who can assimilate certain cultural/religious aspects. This blurb accurately describes the novel. But I liked all the smaller points, symbolism of water, of mould, of the thousand cranes. And more than anything, the very subtle presentation of old Japan crashing with modern Japan.

The symbolism in this work is significant and excellently written. And while I dislike the main character, Kikuji Mitani, even I could not help but be caught up in some of the sensitivities Mitani faces and is caught up in.  The dispositions and inheritances (both in objects and relationships) that befall him from his deceased father are mighty and certainly not pristine “black and white” dichotomies.

This is a very good novel. I think I took it for granted as I was reading it and only afterwards was I able to process how good a work it is. I think it is a written by a master writer, but the storyline itself does not interest me at all. Three stars is a very good rating for a plot that I was uninterested in…….  Recommended for all fans of Japanese literature, students of the tea ceremony, ikebana scholars, and readers of quality literature.