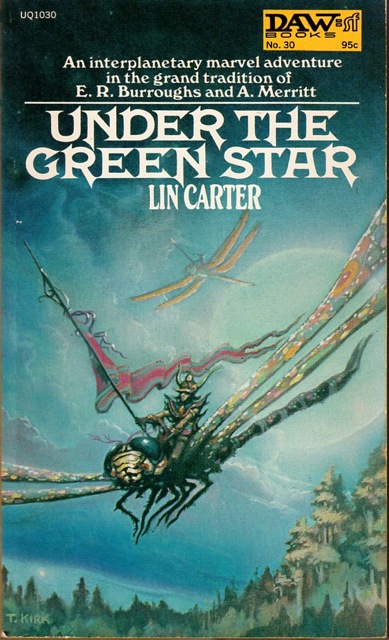 Under the Green Star by Lin Carter was first published in 1972.  It is the first of five novels in the Green Star series.  I think this is the first thing that I have read by Carter, but it is really hard to know for certain.  Anyway, the key fact about this novel is that it is Carter’s attempt to emulate the style and subject of the so-called Burroughs tradition.  This, of course, refers to Edgar Rice Burroughs (1875 – 1950).  Burroughs is the creator of the super famous archetype-level characters:  Tarzan and John Carter. In any case, even the title of this book refers to Burroughs’ A Princess of Mars, which was originally (in some form) entitled Under the Moons of Mars. So, Lin Carter gives us an excellent homage to this sort of sword & planet tradition.

I enjoyed reading this novel because I am always entertained by adventure-pulp stories. There is something wonderfully raw about them and their constant headlong rush into constant adventure.  It is sometimes a relief how authors of this style usually hand-wave and shrug regarding all the tedious details.  They and their characters are not omniscient and all of that is besides the point.  The point is to have adventures and be heroic and carry a sword.

Which is real – the fantastic adventure I feel compelled to relate – or the world beyond my windows?  Have I only dreamed that I have stood where no man of my race has ever set foot before, or is this dull world of tax returns and ball-point pens, of air pollution and TV talk shows, itself by a dream? Are both worlds real? – pg. 7

Carter did a very good job of matching the original form that he was trying to homage.  He clearly has a fondness for and a sharp understanding of that former style.  The vocabulary is just ever-so-slightly less archaic.  Really only people who care a lot about words would notice that his word-choice is not exactly Robert E. Howard’s or H. P. Lovecraft’s.  The descriptions are just barely not quite Burroughs’ descriptions.  But only to those who read a great deal and, as I said, love words.  The style, the milieu, the storyline, the characters, all seem to solidly come from the Burroughs tradition.  And perhaps, even Burroughs himself, if you did not know better.

Similarly with John Carter, the main character in this novel manages to end up on a different planet.  Of course, here is a referential sequence of the nameless main character:

To walk the surface of another planet – to go where no man of my world had yet been in all the ages of infinite time!  Vague thoughts of the books I had read with such fascination in my boyhood came back to me – memories of old Edgar Rice Burroughs and his unforgettable Martian adventure classics – now I, too, like John Carter, could stride the dead sea bottoms of mysteries and romantic Barsoom! – pg. 15, chapter two

But, in the end, Lin Carter knows enough that he cannot duel on Burroughs’ home turf, so to speak.  He knows he has to take us somewhere new. So, the main character manages to get himself to the planet under the green star.

And the setting is actually interesting. I mean, I have to admit that I was reminded a lot of the 2013 children’s animated movie Epic (which was itself based on the story by William Joyce:  The Leaf Men and the Brave Good Bugs).  I do not think it spoils too much to say that on this planet of the Green Star, the people are miniaturized and the flora and fauna is gigantic.  Now, like the nameless narrator, I have no idea if the people are truly miniaturized (Cp. sizing in Lilliput of Jonathan Swift’s work. The people there are about one-twelfth the size we are used to.) or if the people are normally-sized and the trees and insects are just outrageously large.  Imagine huge trees such that their branches are like four-lane highways!  Imagine the peril from things like spiders and lizards!

One does not, however, look for stones in the upper branches of a tree. – pg. 74

And the entirely of the novel is spent within the trees of this world. The ground, if there is one, is not seen and remains an unknown.  Imagine a world with trees so large, that one could live their entire lives without seeing the earth below.  And this food for the imagination is partially why adventure-pulp novels are so much fun.  Now, it is no good if a reader just blazes over the words in the novel and does not actually allow his imagination to enjoy these items.  In fact, without imagination or fun, this is a super-fast and extremely silly read.

We could have done with a bit of tomato sauce, or a twist of lemon, but I suppose Crusoes cannot be choosy. – pg. 77

That is my favorite line in the entire novel. It really amuses me and I feel like I should incorporate it into my daily speech.  Remember that, fans of swords & planets – you take adventure as it comes and you do not act all picky about it!

Well, this is immensely readable especially if you enjoy the Burroughs tradition.  However, even if you have not read all that much Burroughs and/or Howard, this is enjoyable. Sure, it is a pastiche of a time gone by and maybe of authors who were not perfect, but it is excellent escape reading.  Only the hardest-hearted reader would, I think, not find this enjoyable. I’m so glad I own book two, because like our main character also feels, there is something magical about that planet under the Green Sun.