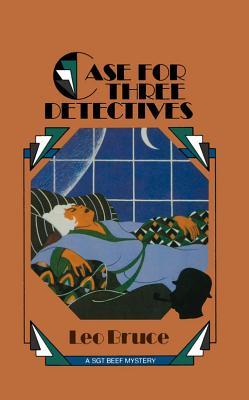 Recently, discussions and thoughts on this novel had been circulating/re-circulating around my small corner of the internet. Motivated by what I read, I went over to the bookshelf and pulled down this novel (paperback version by Academy Chicago Publishers 1997). Its a 240-page read, which was perfect for my end of the year reading in the middle of all the usual events and such that take place. Originally published in 1936 by Leo Bruce; that is a penname, though. The author is Rupert Croft-Cooke (1903 – 1979) and this is the first in the small “Sergeant Beef” series of novels.

This is quite a well-known work and most fans of vintage/classic British detective novels have already read it or know of it. There is not a lot I could possibly share about this novel that the many better-informed mystery readers of the internet have not already discussed.  I am no expert in mystery novels – I read them for entertainment and I am forever unable to guess who-done-it. But I can mention a few of my thoughts here.

This is something of a country-house murder. The three detectives in the title refer to three quite well-known fictional detectives. Told in the first-person from the character Townsend’s perspective, the novel is also a decent murder mystery. Most readers should enjoy the parody of this type of country house murder combined with locked-room.  Townsend knowingly provides the tag-along simpleton position that allows the famous detectives to pontificate and show-off. Its really quite funny.

The author does a bang up job on representing each of the three detectives, though I think he overuses Lord Simon and underuses Smith. Still, he accurately parodies the famous three – without, somehow, going too far and making the detectives completely foolish. In a sense, mocking these beloved characters – but respectfully and tastefully, I suppose.

One of my favorite sections is in chapter 8:

I had learnt that after a murder it is quite proper and conventional for everyone in the house to join the investigators in this entertaining game of hide-and-seek which seemed wholly to absorb us.  It was not extraordinary for there to be three total strangers questioning the servants, or for the police to be treated with smiling patronage, or for the corpse to be pulled about by anyone who was curious to know how it had become a corpse….. I really wondered how these queer customs had arisen. — pg. 59

This amused me because it is so very true – and even until present day where you can see it all the time in TV serials (e.g. Monk, Castle, Columbo, etc.).  Detective fiction has its ups and downs, flaws and idiosyncrasies.  Perhaps the largest is this situation wherein all the laymen, neighbors, and whomever else happens by, all become part of the “detective squad.”  And murders are more like adventure quests wherein any of the usual horrors and miseries of a sudden death are forgotten.

Some reviews about this novel:

While I was amused throughout, there was one laugh aloud moment that I want to share. In chapter 6 (in which we meet Picon), Picon and Townsend examine the room where the murder occurred. Sergeant Beef is doing some detecting there as well. Picon in true-to-Poirot-form exclaims: “Ah, the good Boeuf!” This was such a funny moment for me, I laughed and laughed. Its so perfectly Poirot and so funny even if you don’t know much of Poirot.

Overall, an super entertaining read. Perfect for fans of vintage classic detective fiction. Bruce was clearly an able writer with a good skill for parody. I like that his parody does not turn cruel or nasty. I also enjoyed how he mocks a multitude of aspects of the genre – not solely the “amateur experts.” I can definitely recommend this to most readers.