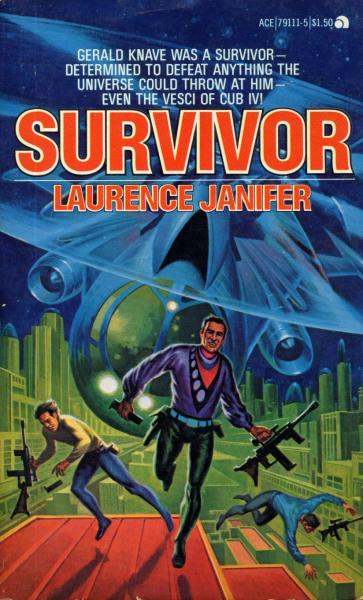 Survivor by Laurence M. Janifer (1933 – 2002) was first published in 1977. It is the first novel in the six-book Gerald Knave series.  It is the first item I’ve read by Janifer, I think, though he did write under a variety of pen-names throughout his career. Survivor is a short work – just 172 pages in the ACE edition that I read.

The novel takes place on the planet Cub IV, which is a human colonized planet. Humans have been there for twenty years and the planet has been nicknamed the World With No Problems. Some novels have worlds that are perfect because of the extreme-resort spa style of the planet.  That is not the style of “perfect” on Cub IV; there is not a marked amount of hedonism and/or wide-open mentality. This colonization just does not have any troubles – as if this new colonization “did it right.”

Survivor is a spare novel told in the first-person by the main character, Gerald Knave. The novel is not about endless world-building, character development, background information, or tedious descriptions. It is very much a punchy pseudo-pulpy late-70s novel. So, it will not stand up to pointed questions about its plot or setting. I miss these sorts of novels a little bit. What sort? Hard to explain; but the ones that feel – to me – like they are just speedy entertaining blasts in various science fiction settings. I do not always feel like committing to the burden of reading ridiculously detailed and expansive universes with more characters than I can keep track of.  Survivor requires nothing from the reader and is vaguely entertaining.

The native species on the planet are dubbed the Vesci by Gerald Knave. They start “taking over” the human populace telepathically.  So the first two humans to be controlled by the Vesci are Johnny James and Laia Kodorko; two citizens of Cub IV that have become the “patient zero” of the Vesci infiltration.  Some things:  since the Vesci are attacking the humans telepathically, they are all also one unit. Both Laia and Johnny and all others taken over by the Vesci speak the same – they use the pronoun “we” and they say things like: “we are here” and “we are all the same.”  Here is where the reader needs to make the choice to not ask the messy questions.  Ontologically the story just face-planted into the Problem of the One and the Many.  So, unless you want to have a read-along with Avicenna or someone, just put it aside and have fun.

The fight between the humans and the Vesci gets funneled into the manipulation of the telephone network. I get it, because communication is one of those things that is key in war, apocalypse, and disaster. Janifer just really focuses on the telecoms here. But the story is, more or less, the same as all the contemporary zombie stories/shows pop culture has been circulating. Telepathy aliens taking over humans versus contagions taking over humans – not a big plot difference, except I dislike the gore that comes along with the zombie stories.

Janifer, and therefore Knave, is a little less “politically correct” than people born post-2000. But I remember when everyone thought more like Janifer/Knave. Its likely a few things in here will make people roll their eyes, which is fine. Now, the big reveal at the end of the novel, which makes the resolution possible and gives us the happy ending, is not very satisfying. It really is smirk-worthy. I will not spoil it here, but it is a weak element to the story.

Here is a good quick read for someone who just needs to read something light and basic that does not require much from the reader. General 1970s science fiction lightweight. And maybe meeting Gerald Knave is a good idea for true science fiction addicts.