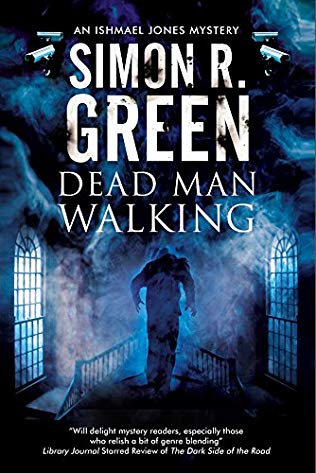 Dead Man Walking by Simon R. Green is the second novel (2016) in the Ishmael Jones series. I read the first novel (The Dark Side of the Road) early in January 2017 and knew I would continue in the series. I liked the timing of reading the novel because it is a fast-paced, easy-reader sort of thing without much brain-drain whatsoever. The second novel was the same, a little less gory, though, but still with copious amounts of fun. A really good read for lazy winter holiday break between lounging and liquor and languishing.

What is this series? Its sort of a spy organization combined with noir British detective stories and rural country homes with monsters. Needless to say, this is not high-brow stuff. Its fun, though, and if you read so much un-fun literature that you cannot enjoy the fun stuff, you have got this whole reading thing all wrong.

The novel has some repetitive lines, which might exasperate readers who are looking for a different (more literary?) sort of novel. But it works here and I like it. Its a comfortable feeling. There are tropes and obvious items and goofy elements, too, but its all in fun. The writing is speedy and I have grown fonder of Ishmael in this second book.

I admit, in the first book I did not know what to expect. I was a little surprised, but I found it gripping and intriguing and a quite a bit creepy in parts. There was a lot of gore – but it was fitting with the storyline. Now that I am more familiar with the characters and the style, it feels like spending the holiday break with some friends.

Penny (the supporting character) is a riot. Even when you know the author is trying to be funny and amuse us very heavy-handedly, it works. I laughed aloud a couple of times – earning some quizzical looks from my household. Isn’t the book I’m reading some sort of noir horror novel? Why am I laughing?

Well, I took a dislike to the culprit early on. I am not sure his motive was anything other than very “typical.” And as far as doing any detecting or investigating, the characters just got shoved around the country house here and there, running around always after-the-fact and too-late. None of this would be good writing for those expert detective club grandmasters. So, why is it so engaging? I think because it does not take itself overly-seriously and there is always going to be a fun/exciting appeal to creepy country homes with murder and spies.

Yes, I intend to read the next book in the series. Yes, its as goofy as you would expect. Yes, I recommend it to, more or less, all readers.