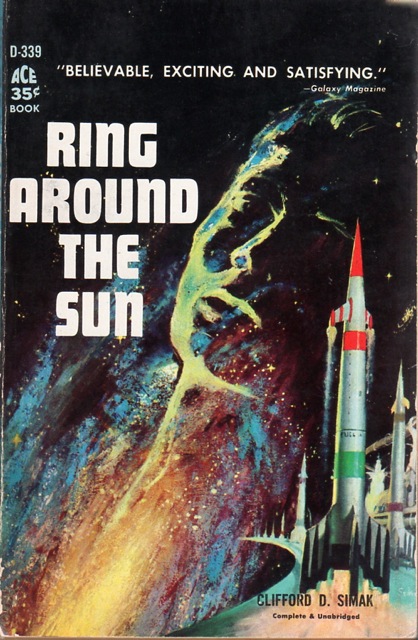 Ring Around the Sun is the seventh novel by Clifford D. Simak (1904 – 1988) that I have read. I read the ACE 1959 edition, but the novel was originally a serial publication in 1952-1953. The cover art to the ACE edition was done by Robert E. Schultz, but ACE utilized this artwork on other books, to include the 1955 ACE Double The Big Jump by L. Brackett.

Ultimately, of the seven novels I have read by Simak, this is the most complete and well-formed novel, in my opinion. Unlike most of the others, this novel has a solid start, middle, and ending, which is a bit of a pedestrian manner of speaking. The truth is, I have previously written that I feel Simak’s novels have dissatisfying endings and that this detracts from a measure of completeness of his novels. In Ring Around the Sun, the ending is sufficient – the resolution to the novel is downright cool!

So, seven novels of Simak and I feel like I am reading the same story at this point. Well, not in the details, of course, but the themes are still the same. Simak has big ideas that get demonstrated in the relationships between three “character types.”  There is usually the Everyman that is well-represented, the alien or non-human, and then there is a human of an evolved nature or who possesses some paranormal quality.  In this novel, the big idea is that there are multiple, but not entirely “parallel,” earths in which advanced humans are trying to “save” humanity from humanity.

Just like in other Simak novels, the first quarter of the novel has that creepy intensity wherein the reader could be convinced this is not quite science fiction, but maybe also some crime/thriller read. Just like in other Simak novels the pastoral, rural setting comes into play. Old country homes, farms, sole proprietor hardware stores, wooden fences, crabapple trees – all the stuff of rural middle America serve to anchor the novel’s character.  Just like in other Simak novels, the main character is a middle-aged chap who is likeable, but aloof. Jay Vickers lives alone, but sufficiently, in Cliffwood. (Get it? CLIFFwood? Har, har har…) The opening of the novel introduces us to Jay in a gentle way, but yet giving us huge clues and valuable plot pieces for the rest of the novel. Unlike so many novels where we find plot elements descending on us like ACME Anvils, these are subtly written and gently placed so that the development of the novel is not heavy-handed.

There is a major goings-on that is the deciding factor for humanity as a whole – and not in a long-distant future. The tipping point is now, with Jay Vickers! Another trademark of Simak is how he focuses on individuals, but yet writes events that affect the whole planet. Jay Vickers is not simply human and as he discovers more about this fact, the novel progresses to show that while Vickers might be abnormal, that specialness is in the process of becoming the norm.

Present in this novel, are also the long moments of philosophical thought wherein the main character questions and wrestles with a variety of existential questions. In this novel, these segments did seem longer than in the other novels, but they also were written with more acuity, I think. Chapter 36 is a big philosophical think for Vickers. In this novel, Simak really ties in a lot of the novel’s subplots, mechanical elements, and incidentals better than in the other novels. I think his work with a child’s top (remember those spinning devices?) is exceptionally well-done. Simak also understands that for the depth that his big idea needs, he has to look at things from a variety of spheres – so he does consider man-as-laborer, man-as-social, economics, culture, and oddly, love. His consideration is also not limited to the here and now; Simak’s big idea always takes a big timeframe. He does a strong examination of humanity in this novel, but I will say, his results are somewhat negative. As in other novels, I feel that Simak is a bit dismal, but that its not as direct or overwhelming as some very miserable dystopia authors.

Although almost all of the elements that make up this novel are found in Simak’s other novels that I have read, I feel they are just done better in this one. From the plot, to the pieces of the storyline, including the characters and their motivations, the props and incidentals, this big idea is both satisfying and complete. It contains all of the key Simak trademarks and has a consistency I don’t find in some of his works. Therefore, if I was to select one Simak work that (out of those I have read) best exemplifies what Simak is about, I would choose this novel.  Further, this novel also serves as an excellent example contra those readers who are under the mistaken belief that science fiction is goofy and inane. This is a serious novel written by an author that is deeply concerned with the state of the world and humanity.

The odd thing, to me, is why, after writing this one, did Simak then attempt the same basic plot so many other times? If it was to sell novels and make money, okay, I accept that. However, an author of this much obvious skill could have written more diverse stories with equal gravity and insight. Instead, this novel seems to be something of a template that Simak then returned to, at least a few more times, in other novels. It is because Simak is a skilled writer that the other novels remain valuable and are well-liked. But, I admit, after reading this one, I think the other novels seem less original and more like template-fill-ins. I guess Simak just really wanted to hammer these concepts down and they were what was vital to his thinking and writing.

Recommended for good readers, vintage science fiction readers, readers who like philosophical speculation, and Simak maniacs! (Also, I don’t know that I will ever look at/think about/use a toy top in the same way!)

Lastly, the “originality” of the film Inception (2010) fades after reading this. But fans of Inception should surely love this novel as well.