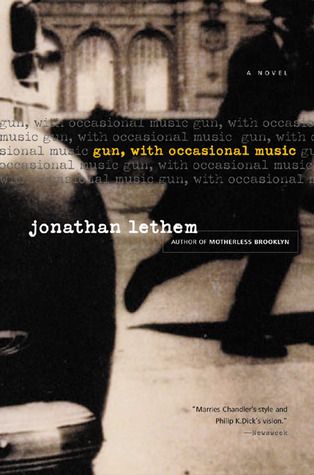 I picked up my copy of Gun, With Occasional Music back in July of 2016.  It was originally published in 1994 and I just finished it today in September of 2021.  As I am having a shelf-clearing kind of year, I did not hesitate to yank this paperback off of the shelf; it has been hanging around for far too long.  Gun, With Occasional Music by Jonathan Lethem is also the author’s first novel.  Frequently, I see readers saying that it is a sort of mash-up between classic Raymond Chandler and stylish Philip K. Dick.  Such comparisons are really spot-on and it is not really difficult to see where/why readers say this:  Lethem (b. 1964) has also been an editor/compiler for some of Dick’s writing.

I think this is a good novel. It was near five stars, but most of the futuristic elements needed to be explained a bit. Or, certain elements given a more substantial reason of being there other than to be quirky and unusual.  Here is a very tricky thing, though.  Any reader familiar with PKD (and at this point, I have read a dozen of PKD’s novels, so I am not a rookie) knows that he never gets bogged down in explanations.  Most of PKD’s novels are in media res and they have a lot of action and the pacing is very fast.  They also usually portray a future society that has gone awry in some way – but PKD never gives the history and detailed timeline for all of this.  So if an author wants to emulate or imitate that style, drilling into the history and causes of things that are widespread and common in the future society would be the opposite of how PKD would write the thing.  Part of the not-knowing how or why things got to be that way is part of the fun of PKD.   It is one of his main tools for shaking up the reader and making them feel dizzy and surprised.  Still, I think it is a valid statement to suggest that Lethem could have given us just a bit more on some of the aspects of his story without damaging that PKD methodology.  Put in a straightforward way, I agree that PKD’s style is to leave a lot of the historical explanations out – but then, talking, gun-toting kangaroos might need a little more than what the reader was here given.

This is tasty futuristic/dystopian noir. Noir is really built on tropes.  Many readers complained that the novel had all the usual tropes.   Yes, it did, I suppose, and that is why noir fans liked it so much.  Such tropes tend to be part of that noir subgenre.  This novel contains several of those revolting aspects that make noir darker and seedier than just any crime story. There are things that the story hints at that make astute readers want to pump the brakes. Such points are real risks that the author took, and I can appreciate that. (Example, what are these evolved animals and how corrupt are the physical interactions these future humans have with them? Taboos and immorality and…and. Are they still brutes if they talk and think and such? Maybe it’s a good thing the author left some of this open-ended and vague.)

Drugs are the norm; they are how society lives – everywhere and used by everyone. Except, no, not everyone. But the non-users are utterly rare and maybe the military forbids the powders? But these drugs are constant and on every page. Its not a pretty world. But the author slides in a cynical line or two about how these drugs ARE the dystopian control, not the Office (the bureaucracy of state police), which might be the face of that control.

The detective story:  a private investigator who is a real louse anyway, gets a case that ends up terribly. Like a good noir story, nobody is saved. It’s a bad day for everyone. This guy has a wry sense of humor, must have broken his knuckles a lot in his lifetime, and uses metaphors with skill and ease.  The metaphor thing is quite ingeniuously done here – this may be Lethem’s first novel, but he is not a novice writer. He was/is a very good writer.  There is dark humor here, but I think even using the word “humor” is overstating it.  Nothing here is laugh aloud, but there are moments where the grizzled noir reader might smirk and nod.

The writing is utterly engaging and the world-building, with its strangeness, is so curious….  The main character, Conrad Metcalf, is likeable and the reader definitely wants to know more about him and what has happened to him.  However, this not-knowing is, like the readers of noir fiction know, really quite false.  Readers actually DO know what happened, even if they do not know the specifics. They know because:  insert all the usual tropes or pick any you like best.  So, do not act like you do not know, reader. You very well do know; maybe you are just being a lazy reader. That being said, PKD and noir are not every reader’s cup of tea.  So, I can imagine a lot of readers who like a sort of  completely linear A-to-B procedural crime fiction being frustrated by this one. Part of the crime fiction genre is the reasoning and detection and fair-play methods that the reader follows along.  It might seem unpleasant to readers who expect detective work and instead are thrust into a PKD-style noir novel.

There are a lot of “cool” things in here. I mentioned the metaphors, but even the drugs have a neat twist to them (the personal blends).  ID cards and licenses and neat little things that developed the story plenty. Especially a P.I.s office that is shared with a dentist!  The “occasional music” is sharp, too! There are cool little things to enjoy in this story, but they tend to also be a little unsavory, yet their coolness factor is not diminished.

With more payoffs on a few of the elements, this is easily a five star read. Instead, some of the elements just seem too pointless. And this is certainly NOT a novel for *every* reader. It’s a bit repulsive at points. There are some crude moments, but at the same time, they belong.  None of it seems unnecessary – instead, it seems like shocking the reader for a moment and making them cringe. Then, not dwelling in the filth or dragging it out, but moving onward. The crudeness can be too much for certain readers, which I understand.  Unfortunately, noir that is sanitized is not noir at all. This one is all noir (the streets flow with powder and gin).