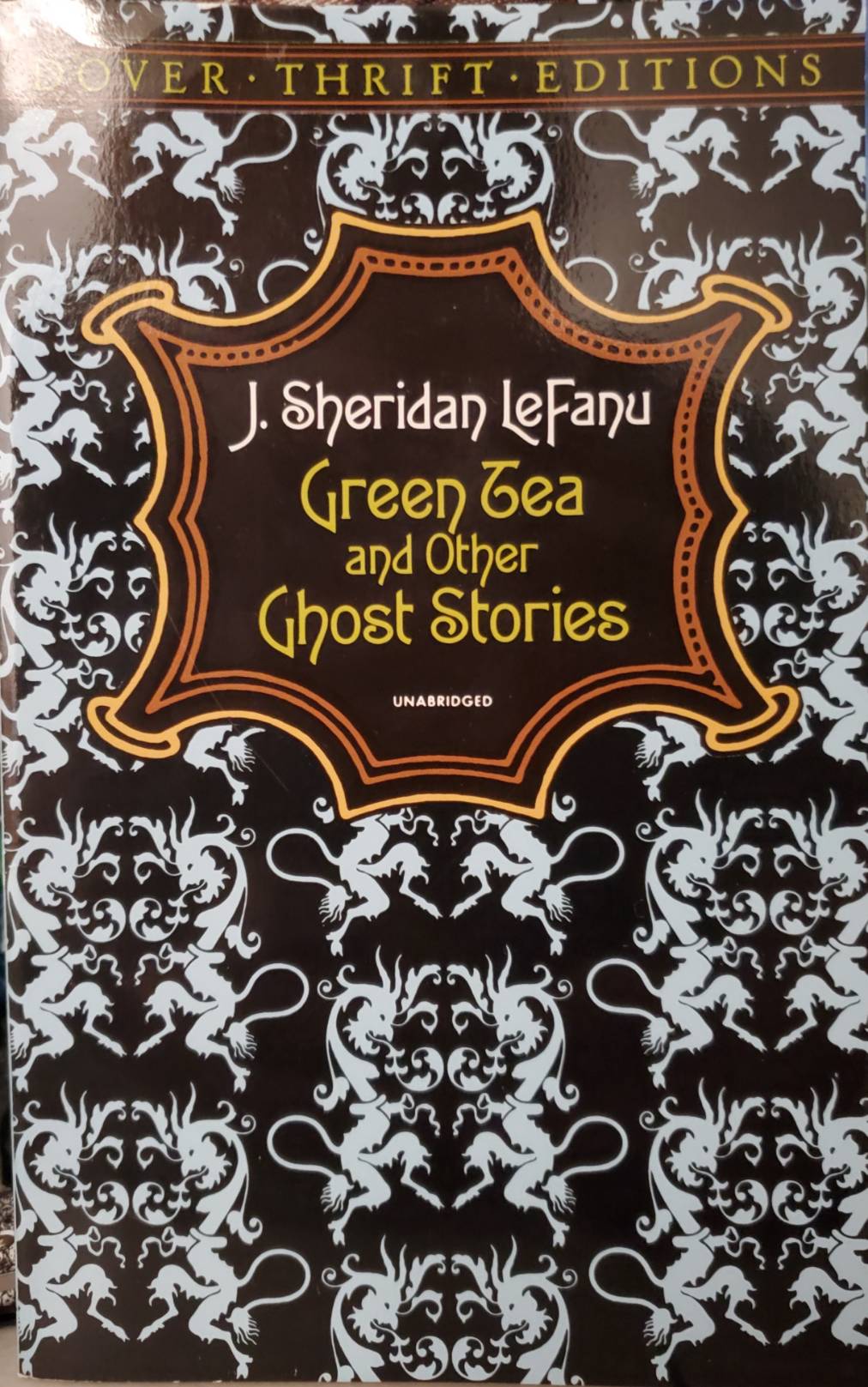 Green Tea and Other Ghost Stories is a Dover Thrift Edition by Dover Publications.  It contains four stories by Joseph Sheridan LeFanu (1814 – 1873).  I have the 1993 edition of this collection; Dover released an e-book edition with a different cover.  On the back of my edition the price is $1.50, but I have a used book sticker, too. I probably paid next to nothing for this.  I mention this because a reader wanting to read just a few good stories will have definitely gotten their money’s worth with this edition.  I am given to understand LeFanu was a somewhat prolific writer, but of the four stories in this book, only one is one of LeFanu’s famous works. The other three stories are much lesser known.

The stories are written in the style that I assume is typical of their times.  Sometimes this feels like it really suits the stories, sometimes it feels ridiculous. Most of the stories are told via a narrator or through someone who heard someone’s story.  In “Green Tea,” for example, the narrator is actually reiterating info from letters by a Dr. Martin Hesselius to a Professor Van Loo of Leyden.

These are not fast reads and part of that is due to the typical Victorian lack of word economy making it stilted, too (this is the official description of it).  Part of the slowness, though, is because these stories all rely heavily on atmosphere.  In “Green Tea” the relating of the events by a doctor to a professor is an attempt to make the very frightening and oppressive angst seem even more elevated by describing it from a pseudo-scientific and clinical perspective.  Obviously, the reader is left to do a lot of the work here – do they believe, as the doctor clearly does, that this is all just just just explainable and diagnosable OR do they believe that this is a rare and supernatural occurence that cannot be explained away by the rationalist?  Its one of those situations where OF COURSE there is a reasonable explanation for all of this mania.  Right?

“Green Tea” might be the closest to what readers consider to be horror.  It really derives its horror from the juxtaposition of the clinical with the unnatural.  When I read through it, I was somewhat unimpressed.  However, the element of the red-eyed ape is really disturbing and creepy. It is probably as terrifying as any violent, gory, scare-fest found in the horror genre because it is unexplained.  Being watched is often an element of a scary story.  The reader who can put themselves in the character’s place will get a lot of creepy thrills here. Imagine being in the room while the red-eyes glare…….

“Squire Toby’s Will” is probably my favorite of the bunch. I think that I liked it most because it is the grittiest and most noir of the bunch. Sibling rivalry, a wild and unruly rich father, and a loyal manservant named Cooper fill these pages with angst and struggle.  I liked the inclusion of the dog as the pivot point for the whole story. This story also has the most satisfactory ending, as well. Poor Gylingdon Hall with its creepy King Herod’s Chamber.

“The Fortunes of Sir Robert Ardagh” is on par with the others, but it is definitely a bit long-winded, which is exacerbated by the Victorian manner of speech. So, one of the characters, Lady D– says:

“I still must believe that some latent fever has affected his mind, as that owing to the state of nervous depression into which he has been sinking, some trivial occurrence has been converted, in his disordered imagination, into an augury foreboding his immediate dissolution.” – pg. 78

The words and meaning are easy enough, but heavens! that is a windy way to put that. Especially when all parties involved are sleep-deprived and in a state of great anxiety.  Do you think he is making a mountain out of a molehill? Or do we really want to go with: into an augury foreboding his immediate dissolution?  Still, look how charming this way of writing was!

Anyway, I feel bad for all the servants and butlers in these stories. They are all included, named and described, in order to provide a witness to the events that occur.  I feel bad for them because they seem to have all been loyal and honest folk. Jones in “Green Tea” probably should have his side of the story told. But then Cooper in “Squire Toby’s Will” seems the most robust of the lot and he made out the best, in the end, as well.

All of these stories rely on what remains unexplained, what the servants saw and heard, and how the key causes and outcomes are left undefined.  I know a lot of readers might really dislike this sort of writing. I enjoyed it – it has its place. I would not want every story to be like these.  The fun and value is that a reader has to really get involved in the atmosphere and maybe that means not speed reading through descriptions of the forests and valleys.  The reader has to do work in their imagination, wondering at all the possible causes/outcomes and turning over the events in their mind, knowing that a definitive author’s decision is not available.  It is fun and interesting to ponder the rôle of the dog, the purpose and intent of the red-eyed ape, the mysterious Jacque character, et al. With some time on a quiet evening, a thoughtful reader could develop a hundred different re-tellings, subplots, and resolutions to these stories.

Another component to these stories is their setting.  Usually we have large manor homes and estate in Ireland.  Huge stone castles surrounded by forests and stone walls that enclose family crypts.  The stables are out back; occasionally we need the stableman to ready one of the horses.  The servants have always lived in these homes, waiting on these families. In the abandoned mansions, vines and rot have taken over and so it requires imagination to see them in their finest moments.  Sweeping staircases, portraits on the walls, candles being ported here and there by characters.  Do not forget the huge wooden and iron doors that are supposed to keep out whatever should not be inside.

Now, the last story in the book “Sir Dominick’s Bargain” is not one that I thought much of. It contained a lot of the elements of the other stories to make it just similar enough.  Here we have a gentleman traveling on horseback and he passes by the ruins of a castle, which he finds intriguing. After moving on to the next town and getting a meal at the inn, he returns to wander and peruse the ruins.

Suddenly, a voice speaks to him – its an elderly hunchback with a lisp.  The hunchback proceeds to tell him the history of the ruins (because the creepy guy was raised there and his grandfather was also a manservant there long ago).  In fact, he begins his tale by pointing with his cane to a spot on the wall that he alleges is the skull and brain matter of the former owner, Sir Dominick Sarsfield.

I could not help thinking, as I read, about how this story plays out in contemporary times.  So, driving through small-town country roads, you pass by a crumpled building in ruins. Now, you might be intrigued for some reason. I know abandoned buildings and similar things have always had a niche following. Maybe when you stop for gas in the only gas station in town (that is charging a dollar more per gallon than reasonable), you ask the cashier about the place. I guess you drive back to get a better look – with your phone camera?  And maybe you find a place to park and are thinking of your Instagram/Facebook post and you go try to get some good shots.

All the wood inside is pretty rotted and you are definitely sure you saw a few roaches. There are spiderwebs here and there. But no way are you just gonna sit a spell on the bottom of the staircase. You are probably more inclined to make a Google Assistant reminder to get a tetanus shot.  Anyway, as you are taking a pic of the vines mildewing around the wall, a voice next to you quotes some creepy verse.

LeFanu thinks you are going to then hang around and hear the history tale of the place from the creepy hunchback with a lisp.

Instead, its just more likely you are wondering:  wait, why is there a creepy dude here?  and instead of the “hallooo! don’t mean to scare you…. Hallooo?” calls that would alert someone to your presence, this little old guy quotes some verse? So, what really happens, is you pull your CWP firearm and drop your phone, trip over a piece of fallen debris, and wonder if you left the car unlocked.