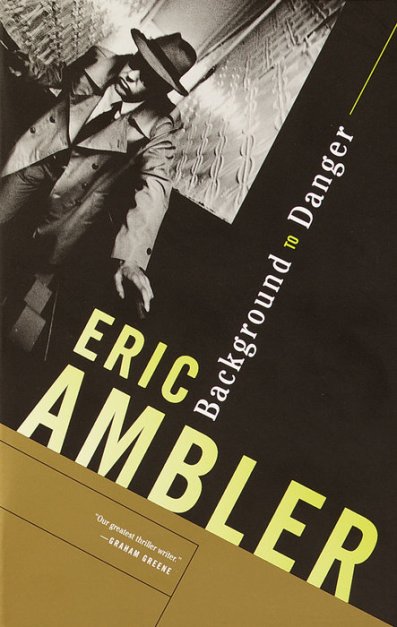 My latest read was an excellent novel to read after the misery of the previous one.  Background to Danger (aka Uncommon Danger) by Eric Ambler was published in 1937.  I definitely should have read this one years and years ago. However, in my defense, I have only begun really reading fiction since the late 2000s. So, once again, I find myself commenting on a novel that is very famous and seems like “everyone” has already read. I am late to the party – but it was a helluva party anyway.

I survived a chemical spill this week – nitric acid and oxides pluming throughout the land; was on the edge of my seat wondering how far the chemical situation would develop.  This is an excellent, though not wholly recommended, backdrop for reading an exciting espionage novel. Another thought that I want to pass on is that due to the reduction of rail travel, thrilling moments like these are almost rendered non-existent these days.  I mean, so many vintage novels and stories and films utilize the train and train depot as a setting or a passage for their plots. It is a real shame that this is gone for the contemporary reader.

I read the Vintage Books 2001 edition.  However, I did find in the stacks an old copy of a Dell edition from 1965.  I took a good look at this later and I do not think it has ever been read. There is a bit of tear on the top right of the cover, but the book is spotless otherwise. Inside, it seems the covers have never been opened (and boy, is that font tiny!)  I really like the art on the cover of that one – I would happily buy it as an art print or poster.

“Mr. Kenton, Mr. Kenton, please! I have not been to sleep all night. I must ask you to spare me your outraged feelings.  We are all feeling outraged this morning, aren’t we, Mailler?” He addressed the words over Kenton’s shoulder. — pg. 80, chapter 7

There is not a whole lot that I can share here about this novel that probably has not been explained and discussed in innumerable places. It is, indeed, a super-famous novel and its stood the test of time, I think, extremely well.  Another thought that I had while reading this book was how the villains and heroes in our fiction have actually gotten stupider.  I mean, the novels nowadays seem to have doubled in size, but they are lacking characters with intelligence and cleverness. So, these page count-expansions seem horribly dull.  The tension and suspense needed in a thriller are slaughtered by stupid characters.

In Background to Danger, there is a relatively small cast of characters. The main character, Desmond d’Esterre Kenton, is likeable and realistic; its easy to believe his situation.  Kenton makes logical choices, human movements. He is not simply a tool the author is utilizing for everything else. The villains do push the boundary a wee bit as to their fanatical behavior or their somewhat ridiculous personalities. Not, though, so much as to actually commit the crime of being outrageous and outlandish. They are violent and intelligent adversaries.  I enjoyed every character in the novel because they were all dynamic and interesting. None of them were the stock characters or cardboard cutouts that readers bemoan in fiction.  The two female characters were quite skilled and enigmatic. They were far more than the typical female characters one might stereotypically expect of the time period/genre.

In fact, one of my favorite chapters was 18 “Smedoff.”  Smedoff is an unforgettable character and I could fancy a whole spin-off novel or series from her character.  I am usually very unimpressed and unenthused by characters, generally. But I am adding Smedoff to my list of characters of awesomeness because she’s fantastic.

Her hair was short, henna’d and dressed in innumerable curls that stood out stiffly round her head, so that with her back to the light she looked like a rather disreputable chrysanthemum. – pg. 248, chapter 18.

The story is definitely a suspenseful and tense read. Ambler’s writing is perfect for it – snappy and lively, but not crude or simple. I know that I was gripped by many of the scenes because they contained just the correct amount of description, plausibility, and movement.  There are several sections that provide a contrast to the somewhat “crackerjack” action sections.  For example, in chapter eight, there is a relatively long commentary on Big Business:

It was the power of Business, not the deliberations of statesmen, that shaped the destinies of nations.  The foreign Ministers of the great powers might make the actual declarations of their Governments’ policies; but it was the Big Businessmen, the bankers and their dependents, the arms manufacturers, the oil companies, the big industrialists, who determined what those policies should be.  Big Business asked the questions that it wanted to ask when and how it suited it.  Big Business also provided the answers. . . For those few members of the public who had long memories and were not sick to death of the whole incomprehensible farce there would always be many ingenious explanations of the volte face – many explanations, but not the correct one. For that one might have to inquire into banking transactions in London, Paris, and New York with the eye of a chartered accountant, the brain of an economist, the tongue of a prosecuting attorney and the patience of Job. . . One would have to grope through the fog of technical mumbo-jumbo with which international business surrounds its operations and examine them in all their essential and ghastly simplicity.  Then one would perhaps die of old age. – pg 94, chapter 8

That was a longer quote than I like to use, but its worth it. Maybe even possibly especially in these fiery days…..

There is a snazzy Mercedes, a whole lot of gunplay, dossiers, and interesting supporting characters to meet along the way.  Also, there are several times that Ambler subtly adjusts the disposition of the reader towards characters – so-and-so is obviously a bad guy, right? oh, so-and-so is clearly witless, right? surely, so-and-so had nothing to do with this situation, right?  And each time the change is not some big ugly hammer-fisted reveal, but a slight adjustment like a few key details now shared and that is it. Its intriguing writing that works perfectly for an espionage story.

Ambler also did the minor details very well. For example, a man absently touching a ribbon on his overcoat, a small but utterly necessary detail about an escape, a minor phrase that later on solves an unsuspected question or a problem. (For example, how a mute person speaks on a phone – hah hah! you thought you had us there!) Also, when was the last time you read the word totschläger in a novel?

Truthfully, since I feel like everyone has already read this, I feel people will think me foolish for my enjoyment; you know, latecomer to the bandwagon thing. I like intense stories with dynamic characters and exciting storylines. I know some readers today will not agree with me that these are dynamic characters, but my definition tends to be different. I usually do not think having strong characters is the same as endlessly relating every detail about characters.  Yes, I do think some of the most tense action scenes may push the belief of the reader just a bit, but not, truly, in comparison to most of the moments in contemporary novels! Remember how I started off this review talking briefly about nitric acid? Well, you know, sometimes danger and action is a reality and not so far-fetched!

If anyone is wondering – no, I have not seen the film (1943), though I read somewhere that the author was no fan of the thing.