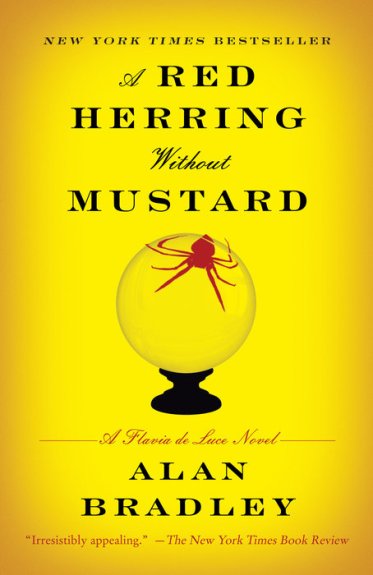 A Red Herring Without Mustard by Alan Bradley is the third in the Flavia de Luce novel series. It was published in 2011. I read the first two in the series and enjoyed them and I think I will be giving this novel the same rating, four stars.

My only criticism of this novel is that it may have just a few too many red herrings and bunny trails. It can seem a bit repetitive. But, and this is key, Bradley writes such an engaging character the repetitiveness does not seem to matter. This series reminds me a lot of the Simon Green Ishmael Jones series. Basically, readers rather know what they are going to get – and if they like it, they like it. If they do not, then they don’t.  No great boundaries were pushed around here, nothing innovative or extraordinary was done.  This novel is not wholly unlike the previous two – however, if you liked those two, you will enjoy this one.  Maybe some readers will feel that the character and stories are stagnant or not going anywhere. I agree with that while at the same time I am satisfied with the novels as they are. I like spending time in Bishop’s Lacey; that’s enough for me.

… I had learned to start campfires, but I’d vowed that never again would I be caught dead trying to make a fire-bow from a stick and a shoestring, or rubbing two dry sticks together like a demented squirrel. – pg. 35, chapter 2

The thing that Bradley does very well is to confuse the reader with “reality.”  There are murders/crimes – but the unreliable narrator element makes the novel a bit more layered than it would be otherwise. The fact that the narrator is not willfully deceiving the reader is important – the narrator is an incredibly likeable eleven-year old. Obviously the perspective and understanding of such an individual is not as holistic and nuanced as an adult’s vision. So, when Flavia applies her efforts to mysterious and suspicious events, the reader really does not have much to go on.

Dogger glanced up at the golden sky, then went on with his weeding.

The novels are, generally, lightweight and breezy.  The pages turn quickly and some of the horrors are glossed over, of course. Interestingly, though, readers can pick up subtle hints and flavors of how wartime struggles affect matters.  There are also poignant moments filled with potential emotion. I say “potential” because Flavia is discovering she is caught in the middle of changing worlds, changing classes of society, changing viewpoints, etc.  She wrestles with the manners of the gentry, religion of a separate group, economic concerns of those dealing with wars, and the maturation of her own personality.  Bradley skirts some of these issues, but he does give glimpses of these struggles.

Under any other circumstances, I’d have said something rude and stalked out of the room, but I thought better of it.  The investigation of murder, I was beginning to learn, can demand great personal sacrifice. — pg. 216, chapter 17

I usually read these with half-attention. These novels do not require my full attention, which is good because sometimes I do not have much attention left to give. Sometimes it feels weird – like I am not really reading the novel and the pages are turning anyway. Yet I do always notice the awesome quotes or quips or whatever.

The main movement in this novel as regards the series is that Buckshaw is under continued financial stress and even the eleven-year old is beginning to feel it. Secondly, the subplot with Flavia’s mother continues. This is an enjoyable read.  It is witty and eventful and engaging. Its not intense literature, but it is fun enough to read in the summertime.