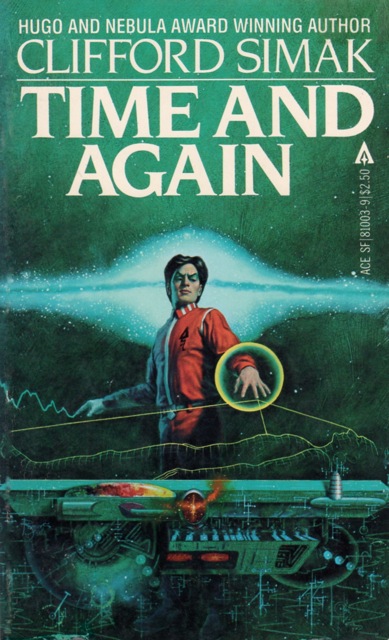 Today is Clifford D. Simak’s birthday (1904 – 1988).  It is a happy coincidence that I am writing this review today, after having finished reading his 1951 novel Time and Again.  I read the Ace 1983 edition with cover by Romas Kukalis.  I also own the 1976 Ace edition with cover by Michael Whelan. I like the Whelan cover more so I read the 1983 one.

This is the fourth Simak novel I have read.  It took awhile to get through this one – and I managed to polish off other novels during the time I was also reading this one. I admit, I got stuck on page 90 for a couple of weeks and the book sat abandoned.

I got stuck at page 90 on June 15th. (Today is August 3.)  So, the book sat there because I did believe this might be a book I have to abandon. And abandoning a book mid-read is not really something I do, unless there is a very good reason. The novel starts all right, gets ridiculously awful – disjointed, confusing, and random – and then suddenly most of it straightens out and things make sense. The ending continues on too long and gets a little out of hand, honestly.

I am impressed that Simak pulled this one together. Still, there is no excuse for the nonsense and total random that goes on early in the book. It is REALLY tough to read through – literally, I was just reading words and they were not stringing together to make a coherent plot or even any basic sense. I could not have told you what this book was about for anything. I forced myself to keep reading (weeks later) – and then Simak pulled some threads together and the writing improved by leaps and bounds.

The story has less to do with time travel and more to do with Simak’s views on quasi-religion (destiny/life). The questions revolving around destiny and life are juxtaposed against the natures of humans and androids. (Simak’s androids are different than Asimov’s.) Finally, over all of this, to make this a science fiction story, rather than a pondering, there is a “war” of sorts that is fought by far-future humans and robots. All of this makes for a confused book. I see what Simak was doing, and its not a bad idea, but the execution got muddied. He sorts it out – mostly, but there are some rough sections that are really tough to get through.

The middle and middle-end part of the book is quite good. You really could not read it without the beginning and actual end, though. So readers are stuck with that murky front end with the total chaos.  Still, when Simak is “on” the writing is great.

And he didn’t say it because he was interested at the moment in war, whether in three or four dimensions, but because he felt that it was his turn to talk, his turn to keep this Mad Hare tea chatter at its proper place.

For that was what it was, he told himself… an utterly illogical situation, a madcap, slightly psychopathic interlude that might have its purpose, but a hidden, tangled purpose. -pg. 145  Chapter XXIV

I really liked this quote and I feel that I can relate to the character’s feelings here. Haven’t you been in a conversation where it seems you are talking around something and everyone seems smiley and fake and bizarre, but everyone plays along? Anyway, the next lines are quotes from Carroll, so Simak’s usage of the Mad Hare (as opposed to Mad Hatter) is clearly deliberate. Similarly, this is somewhat of the feeling you get when you read the early chunk of the novel:  we are all talking about something illogical, random, but we sense a hidden and tangled plot in there somewhere.

At the end of the day, the basic concept of the novel is that of Destiny. Or destiny. I do not believe Simak is a theist, so I do not think that is a euphemism for a deity, but there is definitely a pseudo-Tao concept being played with here. I am not suggesting that it is totally worked out in an academic way, but it is a solid concept for a 1950s novel.

Destiny, the way of men and races and of worlds.

Destiny, the way you made your life, the way you shaped your living. . . the way it was meant to be, the way that it would be if you listened to the still, small voice that talked to you at the many turning points and crossroads.

This page sums up what Simak is playing with in this novel. I am not sure it is clear for most of the book, but this page lays it out plain as can be – or, as plain as the concept of destiny can be, anyway. And the action and characters and storyline are all accidental, it seems, to this discussion, which does not even occur until late in the novel. Its fairly interesting, but the reader will suffer getting to that point. Depends on if it is their destiny or not, right?

Now, there is a bit of time travel – but its not very much like time travel stories we know and “love.”  This time travel is juxtaposed with the concept of destiny, so it kind of applies. And in the last quarter of the novel, the main character ends up in the year 2000 or so in Wisconsin. On a farm near a river in Wisconsin. (Simak students will know this is Simak’s home of which he had a great fondness for and often plays a part in his novels.) Simak really likes Wisconsin, because when he writes about it, it is descriptive and meandering and he draws it out and praises everything about it.  Its so dang rural. And farmy. It kills me when Simak does this. I do not doubt his sentiments and I understand his love for the location, but my word do I suffer reading about grass and hay!

Lastly, Simak had me grinning in chapter XXXIII, when Sutton (the main character) first arrives in Wisconsin in 2000. Sutton meets a resident of the time just fishing and smoking a pipe…a fellow named “Old Cliff.”

This is a difficult, but relatively rewarding read. Definitely for Simak fans. Those with interest in 1950s robots/androids could find interesting bits here, too. And, of course, readers curious about Simak’s concept of destiny would enjoy this. The first half of the book, however, will require a bit of effort from all.