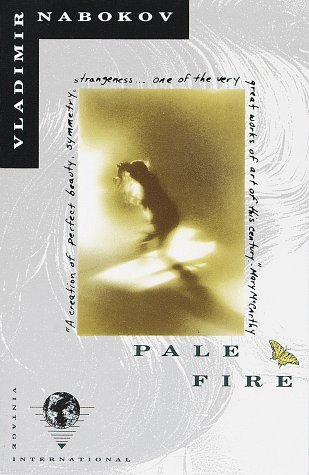 Pale Fire was first published in 1962. This is the fifth novel by Vladimir Nabokov (1899 – 1977) that I have read.  I know that most literary experts (take this term however you will) believe that Pale Fire is a special work that needs to be endlessly dissected and/or venerated. Anyone disagreeing with that will definitely be told that such disagreement proves their idoicy. (Cp. my thoughts and experiences reading Kafka). I share this upfront because I want the reader to be aware that I think Nabokov is a great writer, but that I think his best novels are not the ones usually spoken of in hushed-tones by tweed-wearing, eyeglass shuffling, affected personalities haunting insular literary meetings. Nabokov is undoubtedly and indisputably one of the greatest writers.  Nabokov was a great wordsmith, artist, poet, and writer. He wrote literature with skill, wit, and a unique style. Unrivaled, really.

But sometimes I suspect his awesome skill was wasted on the most uninteresting and tedious plots/stories. As with Despair, I feel this novel has wordplay par excellence and style and the tone is incredibly effective – but all in service to a plot/storyline that, were it not Nabokov, I would not have even bothered whatsoever.

Sure, at the end of this novel, the reader is left to (that is, if they care about reflecting on what they consume) wrestle with the psychology and existence of the main characters. Even, really, suggesting surprising psychological ideas like multiple-personality disorder and calling the story magical-realism, since the line between reality and fantasy is blurry as heck. All over the internet and (before there was a ‘net’) literary criticism texts one will find reference to the unreliable narrator as if this gimmick explains everything. And it very well might! But do we really feel comfortable thinking that the genius Nabokov is gimmicky?

My thoughts on this novel are nearly the same as on Despair:  I did not care at all about any character. Some parts of the text were really tedious and I struggled to not skip over them (e.g. lengthy sections that allowed Kinbote to ramble endlessly – long after the reader gets the gist of it all). I did not mind not knowing which storyline was the real one… I also did not mind the format (poem, notes, commentary, etc.).

But somehow, though sections of the wordsmithing are utterly brilliant and the novel as a whole is mighty – I’m not going to save this one in the proverbial fire, nor am I taking it to the hypothetical island. It is definitely worth reading and knowing about. What an amazing method to share a very robust fictional biography of a character I could not care any less about!

(By the way, Bend Sinister) IS indeed coming to the island and I am toasting my fingers to snatch it from a fire.)

Pale Fire can be read on all sorts of experimental and meta— levels. Nabokov was an academic, so he knew exactly how the literary world would approach his novel. I also think he enjoyed mocking such institutions when he could, if only because he could. Some of that is part of, I think, the value of his wit on display in the “commentary” to Line 949:  and all the time.  This lengthy section is really a culminatory segment to what has been a slowly developing and meandering monlogue by an unreliable narrator. And it is one of the best shows of comic relief I have seen in literature. I could not help but roar [see all epitaphs to Shade, John] with laughter as I read this part. If I had more time alloted me in life, I would scour the endless literary criticism available, because I am certain somewhere, some bright mind has decided to interpret the “symbolism” of Gradus’ distress.

The narrator of the work is installed as an academic at university – so he is surrounded by academics, scholars, and students. Not unlike Nabokov’s career. The narrator introduces us to John Shade with high praise:

Here he is, I would say to myself, that is his head, containing a brain of a different brand than that of the synthetic jellies perserved in the skulls around him. – pg. 27 (Forward)

Tell me honestly that you do not think Nabokov would poke fun at academia.  At the same time, I really appreciated the cantankerous discussion found in Line 172:  books and people:

“That’s where the broom should begin to sweep.  A child should have thirty specialists to teach him thirty subjects, and not one harassed schoolmarm to show him a picture of a rice field and tell him this is China because she knows nothing about China, or anything else, and cannot tell the difference between logitude and latitude.” Kinbote: “Yes. I agree.” – pg. 156 (Commentary)

Those of us old enough to do so – honestly look back on your education and wonder how many times you were subjected to, or knew of this situation, in which inadequate education was given to students that then resulted in students cheated of knowledge unbeknowst to themselves? Nabokov at the heart of it all was an educated man and valued education.

Part of being educated and faculty and an academic means dinner parties with tedious people. And I laughed quite a bit at the little rant by Kinbote in Line 579: the other

Every time I had but one additional guest to entertain Mrs. Shade (Who, if you please — thinning my voice to a feminine pitch — was allergic to artichokes, avocado pears, African acorns — in fact to everything beginning with an “a”).  I find nothing more conducive to the blunting of one’s appetite than to have none by elderly persons sitting around one at table, fouling their napkins with the disintegration of their make-up, and surrpetitiously trying, behind noncommittal smiles, to dislodge the red-hot torture point of a raspbery seed from between false gum and dead gum. – pg. 230 (Commentary)

The whole novel is not wit and frivolity. Indeed, one of the main threads in this novel is the concern and study of religion/afterlife/morality.

The more lucid and overwhelming one’s belief in Providence, the greater the temptation to get it over with, this business of life, but the greater too one’s fear of the terribe sin implicit in self-destruction. – pg. 219 (Commentary)

Indeed, this paradoxical sentiment is a sobering moment for the reader. Especially after realizing that the entire 999-line poem “by John Shade” is a musing on life and death. This includes the massively famous section depicting a “near death experience” in Canto three of the poem, which has been utilized so magnificently in Blade Runner. Cells. Interlinked. Dreadfully distinct. (If you know, you know…..)

In any case, the reader who opens the cover of this book needs to know this is a rewarding experience, but he should modulate his expectations. It helps to be familiar with Pope and Johnson and Shakespeare – but its not necessary at all. It is a study of literary tomfoolery, satire, gimmicks, wordplay, and also sorrow, loss, and exile. Just getting through the Foreward and the Poem will sift out any reader who is unprepared ability-wise for this novel. Readers should not shy from this one, but I think they should also not believe the hype that this is inarguably Nabokov’s greatest work.

I hardly know if I should read PKD or Albert Camus next…..