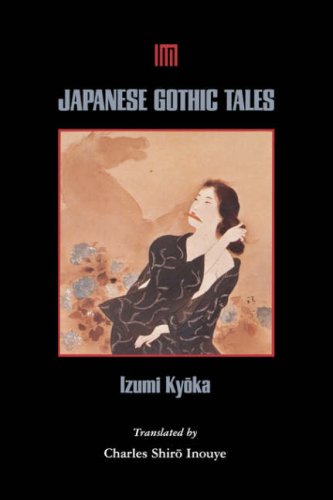 I read this collection of four stories by Izumi Kyoka (1873 – 1939) in April 2020. I decided to read this because, honestly, I was avoiding the next (chronological) novel by Yukio Mishima. This book caught my eye and I decided to read it. The author is considered a major writer of modern Japan; there is even a prize for literature that is in his name given by his home city:  Izumi Kyoka Prize for Literature (Izumi Kyouka Bungaku Shou).  He was a contemporary of Junichiro Tanizaki, Nagai Kafu, and Natsume Soseki.

This particular collection, with its title “Japanese Gothic Tales” is edited by Charles Shiro Inouye.  Inouye wrote his dissertation on Kyoka at Harvard and his deep knowledge of Kyoka shows in his extensive introduction as-well-as the end notes that serve as a brief textual analysis at the end of the book.  This book was first published in 1996 by the University of Hawai’i Press and Inouye also provides the dates for each of the four stories contained in the book.  However, I do not recall Inouye sharing why these four stories were specifically selected for this collection. Inouye also does not provide a bibliography of the author’s works. Inouye might have included one in his 1998 work The Similitude of Blossoms: A Critical Biography of Izumi Kyoka (1873–1939), Japanese Novelist and Playwright, which I do not own.

Inouye starts his introduction to this book by bringing up a comparison of Kyoka and Edgar Allan Poe (1809 – 1849). Inouye builds his discussion upon the notion of “Gothic.” Personally, I think Inouye must be very brave to make this his point of departure because, I think, in literary studies “gothic” has so many interpretations, some narrow and some wide-open, that anyone bringing the term up must also be ready to defend their usage. Its overused and often ill-used as a term/genre, in my not-so-humble opinion. However, Inouye was brave enough to use the term even in the title of the collection, so he must feel it brings some value to the collection.  As this is really my first foray into Kyoka’s writings, and because I am a novice in Japanese literary theory (if even that!), I know better than to make any further assertions on whether Inouye is making strong arguments or not. This is my way of saying, in this review I use all the terminology very loosely and tentatively.

All four of these stories feature elements that a reader might classify as Gothic.  For example, the usage and reiteration of specific colors (especially red), beings that are not what they seem, scenes in hospitals, clergy/religious individuals, forlorn romance, and fantastic components. If, as suggested by Inouye, there is any valid comparison between Poe and Kyoka on their place in Gothic literature, it seems to me that Inouye is more pastoral and poetic than Poe. That really does not have a whole lot of meaning, other than my stating my reader reaction to this collection. It is basically my saying that in these four stories I did not find the outright horror that is sometimes associated with Poe’s work.

The damp and sweaty plum blossoms nearby, a flame ready to flutter away into the crimson sunset, swayed brilliantly with the chatter of small birds. – pg 73 (One Day in Spring)

I see why Inouye put the first and last stories as bookends, so to speak, in this collection. They actually balance each other and work well in this collection even though they were written twenty-five years apart. It is interesting because the core of each of these stories, a sort of failed and forlorn romance, culminates in a hospital room with surgeons. And I know it seems that I am leaving something out, or as if I did not finish my thought, but that is precisely how Kyoka wrote these stories. The endings are unfinished, that is to say, they are as far as they need to go and Kyoka has the strength and bravery to let the reader come to whatever conclusion they very well like. It is not quite the same as saying that the stories are incomplete, although one might accuse me of playing semantic games here. I just mean, the stories are as complete as they need to be, whether there is a traditional “…and this is what happened. The End.” stamped on them or not.

Obviously I do not know how these stories sound and feel in their original language. However, in English, they have an extremely fragmentary feel, but not as jarring as they might be because the near-poetic wordsmithing seems to smooth out fragmented pieces. All of the stories are written as if it was a sleeper awoken who might be retelling their dreams and the linear cause and effect of reality, utterly absent in dreams, causes them to just move from scene to scene without worrying about all the pesky academic details. The reader who only enjoys very clear-cut and straightforward writing will not like these stories; I daresay they would be frustrated and find the stories to be incoherent.

The four stories involve mysterious, inscrutable women, clergymen or surgeons, and odd moments of nature in the scenes. In the first story there is a segment where Kyoka must tell us the azaleas are in bloom. The second story is magnificent for its descriptions of nature; in particular a frightful, deep forest in the mountains.  The third story has a kigo (seasonal word) right in its title (Spring) and devotes long sections to describing rapeseed fields/blossoms. The fourth story has intense imagery describing rains, mud, and the moon.

At the end of the day, I really won’t care much about the stories for the plots. I do not actually feel like the characters were all that important either. I give the shortest of the four stories the highest marks, because it is so abrupt and disturbing and poignant. The second story is remarkable not for any character or plot, but I want to sit down with J. R. R. Tolkien and also Terry Brooks (author of The Sword of Shannara, 1977) and I want to talk about, really talk about, those forest scenes and those descriptions. I will remember this story for its images of nature. The third story is the weakest of the bunch. I really feel that Kyoka wanted the reader to get something from this, maybe a sense of third-party witnessing unrequited love? or something? but the story gets really meandering – just like its main character. The descriptions of water, though, are well done. Finally, the last story, with its weird focus on eyebrows is the strangest of the four. However, I feel it probably best explains a lot of Kyoka as a person and as a writer and the topics that were significant to him and his work.

Do I know what these stories were all about? Honestly, no, not really. But that does not mean that they are crap or I am stupid. “One Day in Spring” is a story retold in ‘onion layers’ – a previous traveler told segments to a temple priest, who is telling segments currently to a traveler, who somehow can be discussed by a narrator, as well. Its not easy to follow.  Still, I really feel like the value in this collection is in the unique manner of storytelling and sudden vivid descriptions. This is not, however, some pretty collection of nature poems; there is plenty of “Gothic” material here:  death, fear, misery, and deformity.  Therefore, this collection is for very strong readers.