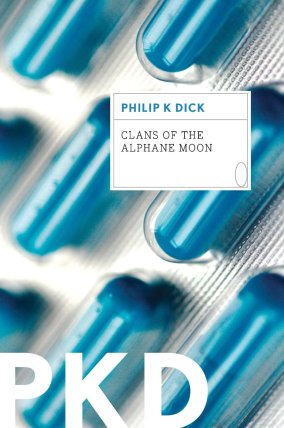 Clans of the Alphane Moon is the seventh novel that I have read by Philip K. Dick.  The first I read was Valis – and I was totally unsure what to make of it, except a strong inclination that it was quite good.  It stuck with me for awhile after I finished it.  The next five books were a bit easier to digest, but they challenged me as to rating them.  They are very good, but also had some not good elements to them.  I gave most of them three stars for a rating.  PKD has become, for me, a very difficult author to rate.  His novels are not like any other novels.  PKD novels stand on their own, so I do not think I can compare them with anything else.  However, after I finished this novel, I immediately knew what I would rate it. It is definitely five stars.

There are three main points I want to state in this review and that readers of this review should take away from my commentary.  First:  this novel was the most science fiction-y of all the 7 PKD novels I’ve read.  Second (and perhaps very related to the first):   this novel was the most exciting and adventurous as well.  Third:  this novel really seems like it contains more PKD than the others.  More honest, open, and present PKD than in the other novels.  That’s rather impressive considering how close some of the later novels come to being semi-autobiographical. I think that while Valis is very revealing, it is also far darker and somber.  This novel gives us a lighter PKD with hope still in his heart.

The novel started off a little blah for me – interpersonal marital relationship dispute is not of interest to me.  And very quickly I decided I disliked the main character’s ex-wife.  She really is a harridan.  She really got my goat, as the saying goes.  But then, too, Chuck was toxic.  He seemed so spineless and droll.  His misery was just as bad as his ex-wife’s hostility.

But then things got quickly complex.  And then there were aliens – intriguing and interesting aliens.  Psi-aliens.  Aliens with neat “powers.”  But of course, there was this jerk in the TV entertainment industry who was involved in the storyline and was mucking things up for Chuck and his already wretched life. Luckily, Chuck has this police officer friend who can turn back time – but no more than fifteen minutes.

Be sensitive to the scenes and situations in this novel and you can practically feel what PKD was thinking or feeling as he was writing them…. or as he lived them.  It is slightly creepy, very intriguing, and shockingly real feeling.

I particularly appreciate the ethical questions that roll through the story.  There is not a heavy-handed pounding on the reader – the morality story is just there and the reader may participate or not as they choose.  I like that PKD does not feel the need to preach or argue – he presents unique and sometimes convoluted scenarios and then merely asks:  now what?

It was first published in 1964.  In June of 2014, a contributor to The Guardian wrote an article which mentions this novel by PKD.  The author of the article (Sandra Newman) seems to think she is praising the slack, hackneyed, works of the era.  She lumps this novel by PKD in with a few others, commenting that these novels are quick and dirty and certainly not high literature – but that they are really satisfying and unbeatable.  Frankly, I think her comments backfire on her. I do not think her so-called classification is valid.  I do not think this is just “typical of the times” in which it was written.  Also, I think her article bespeaks a very superficial read.

If this was the only PKD novel I had read, I might still give it four stars.  I would not appreciate it like I do or feel that I have as good of an understanding of PKD qua PKD if I had not read six other of his novels.  I was never a rabid PKD fan.  I just know there’s more going on here than a “wild west / beam-me-up” science fiction adventure.  If you don’t think a moon colony composed of former groups of mentally ill people has anything considerable to offer, well, you probably don’t have much of an imagination.

Yes.  The key location in this novel is a moon in the Alpha Centuri system.  An alphane moon, if you will.  At one time it was a mental institution of Terrans (Earth-folk), but for the last 25+ years it has become an autonomous, individual “colony” with each mental illness group forming their own society.  These clans then work together (tentatively, but still necessarily) to govern the planet.  And now Terra wants her moon back.  But there’s more politics in the mix.  The aliens with which Terra recently fought a war want this moon, too.  PKD’s playing with the concepts of mental illness is fascinating.  He clearly has an interest in the topic and he uses this concept in his novel without disdain or babble. He handles it perfectly – a seamless element in the novel.

PKD is also at his funniest.  For example:  the slime mold Lord Running Clam (who possesses St. Paul’s caritas).  In chapter 12 when Hentman and Chuck mix up Paraclete and parakeet – I laughed out loud.  Its really funny. And its really PKD.