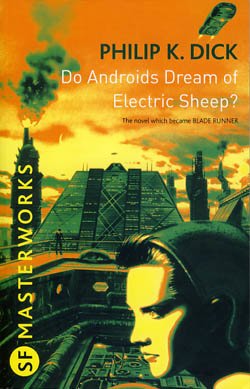 Do Androids Dream of Electric Sheep? by Philip K. Dick was first published in 1968. It is arguably one of PKD’s most celebrated works.  This is partially due to the fact that it was the fiction work that was the basis for the famous Blade Runner film (1982). This is also the eleventh novel by PKD that I have read and it is probably among my favorites of his works.

The movie uses a lot of concepts from the novel. But is not a strict presentation of the novel’s storyline.  In fact, both movie and film seem very different and yet very similiar.  I like both – and I should add that I also really enjoy Blade Runner 2049.  If I have to point out the largest gap between the movie (or should I say movies?) and the novel, I would say that the novel really drives home the point of ecological collapse. The demise of the animal world is really a major part of the plot of the novel, and the novel does look at the concepts of “living beings” and “pets” relative to the situation of ecological failure. As the movie portrays, the setting is post-industrial, post-apocalyptic, and cyberpunk.  So, while the focus of the loss of animals is absent in the film, the film presents the setting very well.

I do not want to compare the two mediums endlessly. However, I wanted to bring up these two points because I thought they were the easiest entry points when discussing this novel. I think the setting is absolutely crucial because a lot of the other concepts in the novel do not work as well without the heavy, post-nuclear war landscape.  The radiation fallout, the fog/dust, makes the questions PKD looks at a little more realistic. I am quite sure that humanity would be asking themselves a lot of introspective questions of a different tone than before such calamity.

Regarding these questions, well, one of things readers need to keep in mind is that PKD is not a philosopher. What is the nature of man? What is humanity? What is a robot/clone/android? It is unfair to compare the novels of Asimov and PKD and conclude that PKD’s novels are not well-thought-out. Asimov possessed a scientific-mind that was cultivated through some excellent academic studies. PKD was a writer in California. This is not to say that PKD was not, at times, brilliant, but the expectation that he would have the ability to attain the rigor for conceptual analysis that Asimov did is unfair. However, many times, the manner in which PKD approaches these so-called philosophical questions is more engaging and delightful than some of Asimov’s efforts.

PKD’s writing in this novel contains a driving insistence that makes all the questions about humanity seem poignant and pressing. PKD’s writing is always messy – he rarely (if ever) gives the reader the background detail and he never ever gets muddied by explanations. PKD is not Gregory Benford or Greg Egan – he is not writing “hard” science fiction and attempting to make plausible high-end mathematical or metaphysical concepts. He is literally forcing the reader into a storyline without any explanations and right into the middle of things, and he immediately will give them a test of their knowledge. Seems quite unfair to the reader – if the reader is expecting to be led along step-by-step with a syllabus.  Add in to this PKD’s fondness of writing stories wherein everything falls apart and breaks down, and you have a story that has urgency and immediacy and can seem very mad to the general unsuspecting reader.

This novel really is built on the idea of being able to (or not able to, as the question presents itself) determine humanity based on a test. Sometimes this test is response-related like a pseudo-psychology exam as with the story’s Voigt-Kampff test (Cp. a stanza of Nabokov’s Pale Fire poem), and some are more physiological related like the Boneli Relfex-Arc Test.

In this novel, PKD has a sort of dark science fiction tone coupled with an intense investigation into questioning what makes a human human? Some of the entry points for PKD’s wondering include: the quality of empathy, love of music, care of pets, relationship with animal realm, off-world colonization, reliance on slave-labor, relationship with suffering as presented by religion, consumption of media/broadcasting, manipulation of emotional states by artificial means, and “crime” as committed by and against non-humans. The copy I read is just over 200 pages, so a lot of the effort is placed on the reader, but PKD just keeps the questions coming so the reader does not get lazy.

One of the effects that works so marvelously in this novel is how deadpan Rick Deckard is. I think in both Blade Runner movies, this was portrayed fairly well, too. I find it absolutely chilling and perfectly aligned with the setting and storyline. Chapter eight is a mighty thing, from a literature standpoint – I think PKD wrote this one so perfectly so it can ensnare the reader, draw them in, toy with their ideas, etc. Of course, this only works if the reader is really, truly, invested in the novel, in which case it is edge-of-your-seat. If the reader is distracted or not fully-invested, I think this section will seem abrupt. I like chapter eight because I thought it was thrilling and intense. Also, it is the first real point at which PKD is showing how much he can shake things up and twist around reality for his characters and maybe even for his readers! Super cool PKD.

The props like Sidney’s catalog work really well for PKD – it jogs old memories from my childhood… black and white paper listings of pigeon racing, sales, etc… you could roll them up and crumple them up just like Deckard does – and they were just margin to margin listings of sales and races and other related things. Whenever Deckard encounters an animal in the story, I felt it quite natural to reach in my back pocket and pull out my tattered, rolled up copy of Sidney’s as well.

This review would, indeed, be very remiss if it did not touch on the fun word/concept of kipple. I am surprised it is not as well known by today’s readers. But there you have the eventual end of all the consumerism and manufacturing. Entropy for all things – garbage mountains of endless kipple. The meaningful and sentimental objects humans keep close slowly deteriorating into landfills and mountains of waste. So, what is truly important to a human? Endless fun can be had pondering kipple.

The storyline has some bizarre segments in it, but this is PKD, so that should be expected. The entire Wilbur Mercer thread is messy and crazy. But maybe that’s just because this story is in the future and you are in the past so, of course, you don’t understand what everyone there in the future understands.