Brother Assassin by Fred Saberhagen (1930 – 2007) is the second book in his Berserker series, which began with the 1967 collection Berserker.  This book is a sort of “fix-up” novel of three shorter works that were published in issues of the magazine If in 1967.  I gave the first book in the series four stars and I think I will be doing the same thing with this one. I own two copies of Brother Assassin; the 1969 Ballantine Books edition with Richard Powers cover art is very nice, but I read my other copy:  the 1978 ACE edition with art by Michael Whelan. Truthfully, this first ACE edition has a bunch of typos in it, but the font was easier for me to look at than in the Ballantine.

As one reads this book, it is very easy to notice that it is not from contemporary writers. The book feels vintage. It also feels a bit campy and pulpy, which it is, of course. Nevertheless, I do not think readers should be speedily dismissive of it just because it does not have the same feel to it as more recently published science fiction.  Brother Assassin is written somewhat simply – this is not the prose we would expect from China Mieville.  The characters are not pounded out in exasperating, excruciating detail. In fact, many may seem superficial or obvious. Yes, and, of course, the female character of the book is emotional and a bit immature (dare I say witless?) 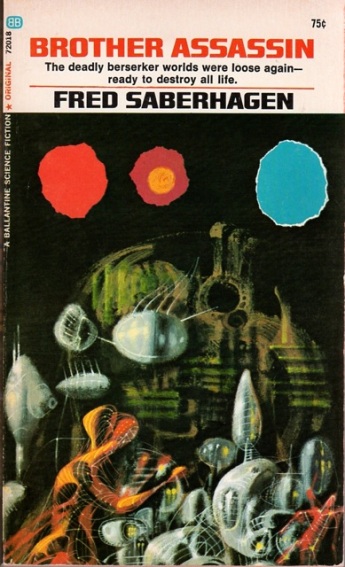 This novel is broken into three sections. Each section is one of the shorter works previously published in If.  The whole novel describes the Berserker attack (infiltration of the past) on the already war-weary planet Sirgol. Each section of the novel focuses on  a particular insertion of Berserker forces into the timeline. How about that as a strategy – if you cannot defeat your enemy in the current time, defeat him by going to the past and destroying crucial elements of the historical timeline.  Certainly, this is not perfect science – it is not meant to be. It is written well enough, though, that the reader can pretend that it is possible and really invest in the well-being of the characters.

Continuity among all this timeline movement is held by the main character, Derron, who twice is sent back in time to deal with the Berserker “assassins.” Derron Odegard is an unhappy, but dutiful time operative. One would have to return to the original stories and then see what (if any?) differences were made or interludes added regarding Derron – but I think in its final form, this fix-up can be read as a redemptive storyline.

It’s not really ideal to think of this as a strict time-travel novel. It’s almost more ontological than it has any right to be. And there’s a delicious amount of heartstring-plucking ethics thrown in each section to make the novel more than just an action sequence.

The last section of the book is going to have different levels of depth and meaning for various readers.  Those of us GenX and back who were raised in the Church are probably going to have a different feel here than those Z-Gen types who have never been inside a church. So, reader perspective will change the feel. Nevertheless, the story is still interesting…. a re-imagining of the business with Galileo Galilei and heliocentrism. Saberhagen does an interesting job here of making all the participants in the debate seem real. St. Francis of Assisi is the other character that is juxtaposed between the heliocentric drama and the struggles of Derron and his timeline. Let me admit, while many parents read “Goodnight Moon” to their children, I was read the Little Flowers of St. Francis.  Like I mentioned: a reader’s background will change the level to which this story resonates with him.

Overall this is not high-tech hard science fiction. The work is flawed here and there.  I just plain and simple liked Saberhagen’s work with the main character Derron. I liked his work with the character Matt. I liked his styling of a Renaissance drama in the last section. So, based on feel – as opposed to anything else – I give this four stars. Its not great literature, but it was a good thing for me to read.