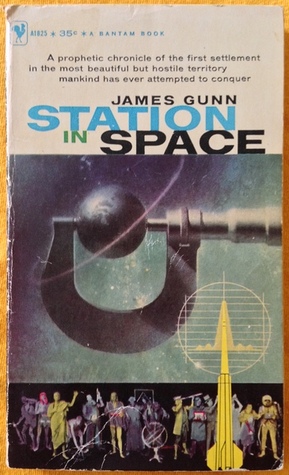 Station in Space by James E. Gunn (b. 1923) is the second book that I have read by the author.  Station in Space was published in 1958, but its contents were all previously published.  I don’t know if I would call this a novel or even a “fix-up” novel.  It is not a collection of short stories, either – because all five pieces in this book actually tell a linear, if broad, story.

The first piece in this book is The Cave of Night.  It was originally published in 1955 in Galaxy Science Fiction Magazine.  It was also adapted into an episode of the NBC radio show X-Minus-One.  It aired on February 1, 1956 and was adapted by Ernest Kinoy.  I started reading and did not really like any of it, but somehow it hooked me.  It was more emotionally drawing than I expected it to be.  And I did not expect any of the last two pages.  Other savvy readers will, but for me it was a surprise.  So, the author gives a good grippy setup and then WHAM! he turns the tables on us.  Very cool. A story from the perspective of an American observing the space program.

The next section is Hoax.  This was originally from 1955 If magazine.  This introduces the character Amos Danton, a young man who is leaving for the orbital space station for the first time. He meets grizzled space veterans and is faced with the authentic dangers and miseries of life not “Inside” (on Earth).  We learn a lot about Cadet Amos in this story that will play a role in the rest of the book.  At this point, I had read the first two pieces in this book and was surprised by how good they were and also impressed with Gunn’s writing skill.  A story from the perspective of a young man going to the station, leaving behind his mother, his childhood, and the Academy.

I had read an earlier novel by Gunn and though it had plenty of good ideas, it was a little “out-in-left-field” and the writing itself was a bit awkward.  In these shorter works, Gunn’s writing skill shows through.  His characters have depth because Gunn lets the reader consider the situations and come to their own opinion of the character.  Spacemen, we learn, have some similar standout characteristics:  stubbornness, dreams and drive, ambition, and resilience.

The third piece is The Big Wheel, originally found in Fantastic Universe, 1956.  This is the longest of the three so far and it starts with a rather unique scenario.  In fact, Gunn is at his most profound in this story.  He gives us quick thoughts on clothes, economics, and the plight of the worker.  Bruce Patterson is the main character in this story, but as I reader I was really pulling for all the guys to succeed and survive. Kendrix is one of characters in this mix – he’s an ex-professor and he is the mouthpiece for a lot of criticism toward society and the government/economy.  He makes some salient points in his brief rants, but I swear some of these quotes were lifted from Gunn’s earlier work, This Fortress World.

“There speaks humanity!” Kendrix cried, pointing.  “Listen to it snore! Don’t disturb it with truths. Like an angry bear, it will smash the man who wakes it.  Sleep, my friend. Sleep on. When the world collapses around you, sleep, sleep. . . “

In any case, this is a story about the men who are struggling for jobs to support themselves/their family.  They have been selected for this “investment” project – to build the Big Wheel – a big orbital in space. The training is grueling.  The reason behind the entire project calls into question a number of opinions and beliefs. And it is also a realistic look at the demands of a space program.

The next section is Powder Keg, originally found in If, April 1958.  I did not love this one as much as I liked the others – but there can be no doubt that it is a solid, well-written entry.  In this piece, we meet Air Force psychologist Lloyd Phillips as he blasts off to the orbital under orders to discover if the men there are sane and can be counted on.  Of course, the orders come from a General who has motives and psychological issues which impinge on the situation heavily.  Phillips is forced into the miserable nerve-racking station. He meets insubordination, rudeness, challenge.  He also undergoes the strain of an emergency which threatens the lives of all the crew.  And he is forced to realize the situation on the station is not understood by those “Inside” (back on Earth.)  This story is tough on humans. It portrays them as heroic and honest, but also stubborn, difficult, and intractable.

The final story, Space is a Lonely Place is my favorite of the bunch.  It is a really good piece to end this collection.  Here is a story about men making the strained trip to Mars. And of all the harrowing, ship-bound, “out of food/water/O2 stories that fill out the science fiction genre, I really like this one the best.  It is kind of what Gateway (F. Pohl) should have gotten right.  This is one creepy, disturbing, morally-challenging, gripping story. Shepherd! (You will understand after reading it!) Holy cow, Shepherd!  And the last line in the story is a statement by Lloyd Phillips and it is so creepy and eerie it seems straight out of The Twilight Zone and Hitchcock.  I actually own the magazine wherein it first appeared:  Venture Science Fiction, May 1957.

Anyway, I loved this collection – more so as it was put together, than anything separately. It reads really well.  And this is science fiction without ray guns and aliens.  It is science fiction from the mid-1950s that deals directly with the space program – and the dreams and demands of mankind regarding it.  I appreciated the psychological elements the most, I think. The economic scenario was not lost on me, and I could grant that some good marks.  But overall, Gunn captures the concept of mankind’s indefatigable “dreams” and what mankind will sacrifice for dreams – how dreams are this driving force, shoving man across frontiers and boundaries, having him take risks over and over again.