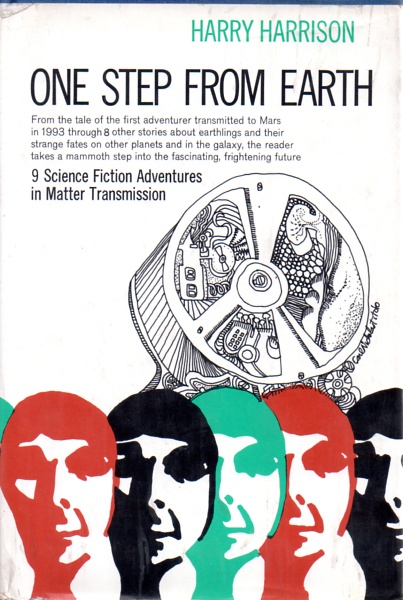 One Step From Earth is a collection of vignettes by Harry Harrison and published in 1970.  The collection presents a possible timeline in human history that follows the development of “matter transmission” technology.  I read the Macmillan hardback edition with cover art by Carl Titolo.

Harry Harrison (1925 – 2012) is known for his Stainless Steel Rat and Bill, The Galactic Hero series. He was a fairly prolific writer – besides his own works, he wrote many reviews and essays as-well-as editing a number of anthologies. The only other item that I have read by Harrison is The Stainless Steel Rat (1961), which I rather enjoyed. In contrast to the SSR novels, this collection is more serious-minded and was better than I expected it to be.

I admit that I was skeptical of this endeavor by Harrison. I might have been suspicious because I was thinking that such a collection of stories would be very forced and heavy-handed. All of the stories are on “matter transmission,” so I did wonder how much interesting stuff could be plumbed from this topic. One always hopes the authors are creative and insightful, but there is always the worry that the stories will be awfully boring and tedious. Or, worse, that the stories are more like “etudes” and practice-writing than fully developed pieces. After all, anything can be a writing prompt, but very little of what gets written is quality.

Luckily, all of these stories are decent enough works. Overall, the entire collection ends up with an average feel to it. I gave the whole thing three stars.  However, there are several stories that rated a bit higher because they were well done. Nothing here is something extraordinary or vastly superior to the great stock of science fiction writing, but there was not a story that was so wretched that it tanked the whole group. This ended up being a great read for mellow evenings. So, no pulse-pounding, action-thriller, pulp pandemonium here!

As expected, the vignettes here are glimpses into the usage of the matter transmitter technology.  Naturally, I assumed Harrison would try to present a variety of aspects of the technology, and Harrison did do this, but I feel there were also many other points of view that could have been used for even more stories. The ones here are decent and do present a variety so that the reader does not feel like the same story is being retold. The introductory essay is good enough, letting the reader understand some of the purpose behind this collection.

Most MT stories have been of this fun-and-games variety, all involved with building the machine and seeing what it does to the first victims who are fed therein.  All of which can be very interesting, but is by no means a complete picture of the possibilities of MT.  Let us think ahead a bit.  If we can imagine an operating MT we can certainly consider the possibility of the widespread use of MTs.  If the machine works it can be made to work cheaper and better and soon we might be using MTs the same way we use telephones now.

But what is the effect on man and his institutions when this happens? – pg. x

Well, what Harrison refers to as MT is something very like a portal in a videogame that allows the player to “zone” to a new area. Where have we seen things like this? Sliders TV show (1995 – 2000), portals in EverQuestII and in World of Warcraft, Nether portals in Minecraft, etc.  But most obviously, we are all thinking of the transporter in Star Trek, which is the one example I have listed here that predates this collection by Harrison. It is 2016 and so we (particularly looking at pop culture and entertainment) are so familiar with MT that it really does not impress us at all. But in 1970, this would be a far more interesting subject to ponder. And, yes, Harrison’s MTs do not operate like Star Trek‘s (this is not a molecular dissolution via energy source, but rather like doorways Cp. Stephen King’s The Dark Tower series).

All of this background stated, I do not think that Harrison really does present the effect on mankind and his institutions. Maybe just peripherally, but not to the depth or with the facets that a scientifically/philosophically-minded reader would want from such an investigation.  In the end, most of these stories are more on the superficial side of that investigation, instead of giving a deep examination of repercussions and reactions. Still, let us also recognize that Harrison is writing fiction – meant to entertain, so it is probably a good thing that we are left with entertaining stories that are not desperately boring, which is how scientific investigations could have turned out.

Anyway, it is no sweat or work to get through this comfortable-reading collection.  The couple of slips are the stories I gave two stars. Those pieces were ones that I felt just did not carry enough purpose or value. The three stories that I rated four stars are really the ones readers should focus on, but there really should not be any challenge to just reading all of the collection regardless. I liked the setting of Pressure the best and while I feel it is not the most realistic set-up for the story, the setting is exciting enough to carry it through. Plus, Harrison gives props to Yuri Gagarin (hero!). The overarching setting is the planet Saturn (a far under-used planet in science fiction, in my opinion).  Another disturbing element of this story is the cigarette smoking, which, by 1970, Harrison should have known not to include here.

The story A Tale of The Ending was one I was very worried about. It takes place (as one can surmise on its place in the contents) in the far, far, very super-far future. Obviously, it takes a vast imagination and good writing skill to pull off any kind of story that takes place so far in the future. Generally, writers who attempt such settings usually fail and their stories seem either straight out of an LSD-trip or cannot maintain the futuristic-ness of their original insight. So, I must admit I was really surprised that this one came out so very nicely done. I like the little hints of academic fields, I liked the hints of communication protocol, and overall, I liked the characters – for as short a time as I got to know them.

In some stories (e.g. One Step From Earth) Harrison puts a lot of the story’s weight on the actual MT. In other stories (e.g. Wife to the Lord) the MT is in the background as a foundation element, but not highlighted. Overall this balance holds throughout the collection. Sure, the stories are about the MT, but not always an MT crammed in our face. A gentle, mellow read; above pulp, below “hard scifi.”

I finished reading The Stainless Steel Rat by Harry Harrison and was really happy for having done so.  This is a really fun book.  It was first published in 1961. My copy is published by Pyramid Books. I looked this up: Pyramid Books is now known as Jove Books, which is a paperback publishing company, founded in 1949 by Almat Magazine Publishers.  Jove is actually part of the Penguin Group of publishers. Anyway, this is the first in the Stainless Steel Rat series by Harrison.

There are a lot of reasons to love this novel.  It’s written in the first person with a style and tone that makes the main character always seem as if instead of lecturing you, he’s having a casual conversation with you.  Harrison has a light-hearted, witty, and fluid writing style in this novel that makes the pages turn quickly.  The novel starts in media res with a robotic police officer arresting Jim DiGriz, who is in the middle of a robbery.  Immediately, the reader finds a polished crook who has plenty of workable philosophical ideas on society and who, while committing crimes, avoids physically harming others. Right away in chapter two, on page 12, we learn why Jim DiGriz considers himself a “stainless steel rat.”

Wikipedia has this to say about Jim DiGriz, the charming anti-hero of this novel:

“He is charming and quick-witted, a master of disguise and martial arts, an accomplished bank robber, an expert on breaking and entering, and (perhaps most usefully) a skilled liar. A master of self-rationalization, the Rat frequently justifies his crimes by arguing that he is providing society with entertainment; and besides which, he only steals from institutions which have insurance coverage.”

In any case, after attempting another heist, DiGriz is actually caught and is maneuvered into working for the government. He joins the Special Corps, which is the elite law-enforcement and spy agency led by the former greatest crook in the Galaxy, Harold P. Inskipp (a.k.a. Inskipp the Uncatchable).  DiGriz discovers that the organization is composed mostly of ex-criminals like himself, and he develops a unique friend/enemy relationship with Inskipp.

The rest of the novel involves some of DiGriz’s adventures chasing Angelina – on behalf of the Special Corps.  He finds himself very attracted to her, but she is an inveterate criminal on par with DiGriz’s skills.  Indeed, she always seems to be several steps ahead of DiGriz, which both frustrates and amuses him.  The story is interesting and is something like reading Ocean’s 11 or The Italian Job, but in space with a bit of a fuzzy line between what a criminal is and what a hero is.

In chapter 6, DiGriz says something about sending a psigram about a theft.  I like this concept of psigram – and I feel it has had a lot of derivatives since Harrison wrote it.  For example, I immediately thought of the psykers in Warhammer 40k.  This is a pretty neat little concept just tossed in the middle of the overall plot, but it’s a nice touch for a science fiction adventure story.  I enjoyed the book and it was a fast read throughout, although the chapters taking place in Freibur did slow down a bit.  Freibur is a planet on which DiGriz has caught up with Angelina and is trying to arrest her, so he involves himself in her own plot of trying to cause a revolution on the planet.  These chapters were good, but I do feel they went on a bit too long.  At the end of this section, I was somewhat disappointed with what I thought the ending/resolution was – until the last page!  I read the last page and grinned at my paperback copy because the last few paragraphs fix everything and make me desperate to read the next in the series.