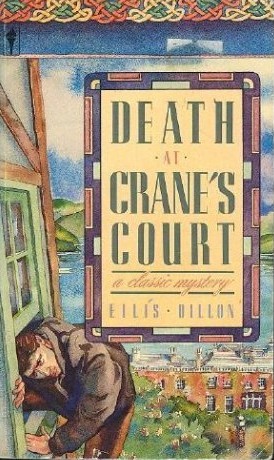 Death at Crane’s Court by Ellis Dillon (1920 – 1994) was first published in 1953.  I read the Perennial Mystery Library edition of 1988 with cover by Bradley Clark. This is the first novel I have read by Dillon – not too surprising a fact since Dillon is only known for very few mystery novels. I would definitely read more of her works, though.  She was born in Galway, Ireland and several of her novels take place there.

In this particular novel, however, the setting did not play a major rôle whatsoever.  I actually would have preferred if it had more significance. I was hoping for a more culturally-flavored story, I think

Crane’s Court is a “hotel” (older meaning of the term) near Galway. The hotel has a new owner and he arrives via train with one of the new residents of the hotel. The new owner is found murdered not much more than a month after his arrival and the suspects are multiple since the majority of the residents are: hunters/sportsmen, senile and crazed, invalids/infirm.

Everyone, it seems has motive, opportunity, and is in agreement regarding their negative feelings toward the new owner:  John Burden.  The story begins following the travels of George Arrow to his new home at Crane’s Court. And as plain and easy-going as George is as a character, the novel is really stolen completely by the enigmatic and vociferous Professor Daly.

Issues that face the detective, Inspector Mike Kenny, are the facts that the residents of the hotel are members of a past-age wherein many would have been upper class and therefore not subservient to lawmen and the public justice. They all still dress for dinner. The location of teatime in the facility is a major item of contention. In other cases, the senile and/or crazed residents are treated with just as much privilege as their peers. But, rather than living in a familial and warm community, there is a great deal of competition, distrust, pettiness within Crane’s Court. Some of this is due to eccentricities of old age, some of this is due to social status.

I wanted to like this novel a whole lot more than I did. There are a number of red herrings, but the clues are slim. All of the characters are recklessly unique and some of them are charming. But throughout, I felt any one of them could turn and reveal their hidden maniacal side. I was never sure when each character really was cleared of suspicion.

And it is not a fair-play novel. For the most part the reader follows Inspector Kenny around as he questions the residents and suspects, but the reader is not privy to any of his conclusions or argumentation. Toward the end of the book, the real surprise is almost how much work Kenny has done “off-stage.”  In fact, a lot seems to happen off stage and maybe filling in some of these gaps would have made a more rounded novel.

At the end, if I am being bluntly honest, I am not sure I think the guilty character is perfectly convincing – although it is all explained sufficiently. And I don’t think I really like any of the characters. I mean, they would be fine to read a short novel about, but I do not think I would turn my back on any of them.

This novel would not disappoint any vintage readers or mystery readers. I think it actually falls closer to a four-star rating, but I always rate low when books are in the middle unless there is just some overwhelming reason to do otherwise. The Professor could have been one of those reasons – he is definitely the most engaging of the group. I found him, sometimes, to be a little creepy and weird (the glib are disconcerting).