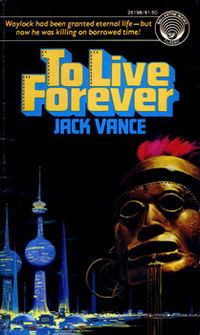 To Live Forever by Jack Vance was first published in 1956.  I think it can be considered Vance’s first “real” novel.  I found my copy for $1 at a comic book store, of all places.  My copy is the second edition 1976 by Ballantine Books.  The cover art was by Dean Ellis.  It is also the first Vance novel that I have read.

This novel is another dystopian story.  Overall, I found the book a good, average read.  And this is pretty good, because I was concerned that the first novel of this author might not be great and also that the story would be dated and tedious.  However, it really does not seem dated at all and as a early novel by the author, it’s a solid entry.  There are problems, though. For one thing, there just was not “enough” science in the science fiction.  There seemed like there might be – particularly in the first half of the novel when the main character finds a way to manipulate his memories, but then the science disappears.  Another reason that I only give this novel three stars is because the relict/clone/surrogate scheme is never really fully explained – or, I suppose, I was too dense to figure it out.

In this dystopian future society, the highest class of citizens have clones.  How many, by what real means, etc. was a little confusing and a bit sketchy.  Maybe other readers will have a better time of it than I did.  I get the general concept and I shrug my shoulders at any attempt to figure it out further. So there’s clones. Okay – moving on. The whole point of the novel is that a stratified society of classes has been developed.  This is not an organic development, but an artificial one that is the society’s official policy.  It was instituted presumably to avoid Malthusian catastrophe; specifically the problems arising from overpopulation.

The classes of the society are a form of meritocracy wherein the “slope” of one’s life is measured and ranked.  There are several strata – and each individual can progress, via striving, to a higher level.  The goal is to reach the highest level:  Amaranth.  As one progresses upward through the strata, one’s life is extended by medical procedures.  Instead of making the procedures to extend life available to all – it is granted based on the striving/slope merit of the individual.  The top level, Amaranth, is reached by the fewest members of society and one is awarded immortality (life through a number of clones, etc.).

Although this meritocracy of classes was instituted in order to save the population from a lack of resources and to provide order, it is really a sham.  The ratio that governs the population and promotion is hindering.  Also, it is not entirely “fair” because those in power have more say in the matter than they ought to.  Finally, this ordered policy was to reduce stress and misery in society, however it has had the opposite effect.  A very high percentage of the population suffers from mental breakdowns due to the stress of their striving/slope efforts.

The main character is Grayven Warlock/Gavin Waylock.  I think on the back of the book it even reads Garven Waylock.  So, basically, it gets a bit unsteady.  The main character is a “glark” – which is a person who is not participating in the official Fair-Play policy.  This amounts to about a fifth of the population.  Glarks do not strive and are much like the Other-Outsider class of the system.  The individual Grayven Warlock, however, had reached Amaranth and was involved in a criminal situation and therefore was forced to escape by becoming part of the glark segment of population.

Glarks live in Carnevalle – an almost lawless eudaemonia wherein the citizens of Clarges come to play, act-out, and otherwise blow off the stresses of their striving.  Waylock begins his quest to once again reach Amaranth after running into an Amaranth named Jacynth Martin while in Carnevalle.   Needless to say, Waylock ends up causing a revolution.  The latent frustration at the official system that runs deep in the lower classes of the society is expressed in certain groups like the Witherers, but Waylock does not align himself with any group.  He is self-centered and seems almost completely amoral.

As you can see, Vance really developed an interesting dystopian society.  The novel itself is heavy on presenting the difficulties of striving/slope/fairness.  It indirectly calls into question the fairness and ethics of characters individually and as a whole.  In the end, it even suggests that such a system is full of artificial and meaningless striving, which has stifled any real creativity and striving that is inherent in humans.  Throughout we meet various characters that represent different views of the society.

This is a very good novel to be read in a political philosophy class, a comparative literature class, and even as representative of the anti-hero archetype.  However, as a science fiction novel, I can only give it three stars.  I feel the overall pacing of the novel was slow, fast, slow, fast, slow fast…. in other words, it had moments where things picked up and were very intense, but then things always fell down and plodded along again.  The characters are not really developed much. Jacynth Martin seems really bizarre, but Vance does attempt to explain her motivations.  Waylock, overall, did not strike me as any more amoral or monstrous than other characters, he just seemed to be a lot more luckier than he should be.  I would have liked a little more about the cloning-situation.