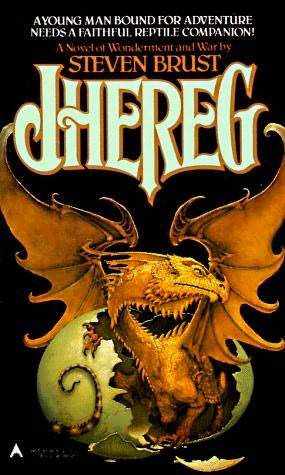 Overall, I wanted to be blown away by this book’s awesomeness.  After all, the majority of readers give it five stars and high praise. But I find that my feelings are related to how I felt about Terry Pratchett’s The Color of Magic.  Both books start a large series of novels in a particular world devised by the authors.  Both books, I feel, are praised by readers who adore the entire series. Taken by themselves, and without regard for the other novels, these first books are only three star novels. Do not get me wrong, I adore Discworld (and have given novels in that series five stars), but the first book? Not great. Same with Jhereg, it’s good and it’s likely that the other novels are quite good, but by itself it’s just good. Three stars.

One of the reasons that I give this book three stars (and not more) is that I felt the reader could have had a little more assassinating and a little less dialogue about “politics.”  Well, it’s not politics at all, really, but I am unsure what to call it. I guess:  the relationships between the various Houses. And frankly, I am still quite a bit confused about the variety and style of each of the houses, anyway. I get it – but it’s unsatisfying. The name of the main character is Vlad Taltos – which is a very cool name. And the first couple chapters are very good introductions to Vlad. It shows him using witchcraft and daggers and summoning his own pet (familiar) dragon (jhereg).  So, I did have high hopes.

The setup of the story is decent, a sufficiently powerful bad guy, called The Demon, hires Vlad for a very specific and intense job for which the compensation is too much for Vlad to turn down. However, the story gets a little sidetracked here and there.  The reader is forced to do a lot of work piecing together some of the considerations that Jhereg has on how to complete his “work.”  But for an assassin-mobster, he does not really do much killing. Instead, we are told a lot about how he prepares to do a “job.”  While that’s all well and good, I feel that maybe a little less politics and a little more assassinating would have been good for the story.

The job gets completed and the reader is happy for Jhereg and his band of friends. However, I guess it was not a triumphant victory, but more of an “okay, good job, whatever.”  Also, the last chapters, which introduce Rocza, are too soon. If you have a plan of 19+ books, I do not feel we needed this Rocza character right away. Or, maybe, the character did not have to be who they are in this novel – save it for later.

Look, “people” live for thousands of years. Death is not necessarily final – because revivification is commonplace. There are a bunch of “Houses” somehow related to the Empire. If you can muddle through that stuff, this is a quick read with some originality.