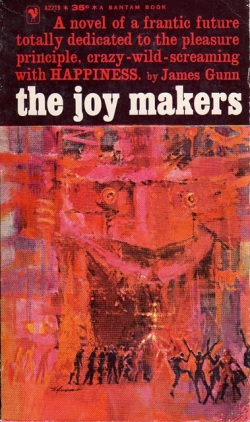 This book was published in 1961 as The Joy Makers by James E. Gunn.  However, this is a fix-up novel of three shorter pieces of fiction that Gunn published in 1955.  Each of these three pieces remains separate in this book; Part One is the story The Unhappy Man, Part Two is The Naked Sky, and Part Three is Name Your Pleasure.  These parts are separate but remain vaguely connected through the fictional timeline. Without a doubt, my favorite part was the first. Overall, though, I only found this book to be a worthy of three stars.

I read Gunn’s This Fortress World and also Station in Space. I think the latter is also a fix-up novel; it’s actually one of my favorite works I’ve read since keeping this blog. I easily gave it five stars – because it shocks and impresses. This Fortress World was okay – but the story got away from Gunn. I forgave him because it was an early effort. Needless to say, I am a fan and I really wanted to love The Joy Makers.

The Unhappy Man (part one) is my favorite part of this book because it contains a lot of the noir/suspense that is both typical of vintage science fiction and is an element of good storytelling.  This piece feels very much like a Gunn-piece and is reminiscent (the character’s demeanor, the settings) of Station in Space.  Even if a reader chose not to continue through The Joy Makers, I think reading this short part is worthwhile. Be warned the ending is relatively open-ended, so those readers who need tight closure to stories may be slightly frustrated.  I liked the ending and spent some quality time contemplating “what happened next.”

“Are you happy?” Wright asked quietly.

Josh realized, with a start, that it wasn’t a rhetorical question. “I think that is an indecent question.”

The second part takes place forward in time from part one. In many ways it is the likely outcome of events and ideas in part one. While part one shows us the concepts in an individualized context, part two demonstrates the concepts that Gunn is exploring by contextualizing them in a society.  At first I did not like the main character, Morgan the Hedonist.  A Hedonist is a profession and title in society; something like a psychiatrist or philosopher. The Hedonist lives (theoretically) entirely for the pleasure of others – meaning, his life is devoted to the principle that everyone ought to be happy. The Hedonist fixes the lifestyles of his patients so that they can be happy. Well, from the start this guy seemed like a sleezy charlatan. Okay, but by the end of this part, I decided that I had misjudged him.  He’s just naive and stubborn.

Habit is a technique for simplifying existence, for saving time and the energy of decision.  It is a pleasure tool.

The Hedonist is also something of a well-trained monk.  He has applied the principles of his field to his own life.  He is adept at devaluing, suppressing, and substituting values, choices, and opinions so that he remains happy.  The idea here is something like a combination of Stoicism + Epicureanism.  Immense and regulated self-control over one’s desires, opinions, viewpoints, and physical instincts allows for the possibility of remaining happy.

I like some of the things Gunn talks about here (the education system of this society of hedonics).  However, in ruminating on eudaimonia, Gunn totally loses all of his threads that this is a fiction story. Suddenly, this becomes a semi-tedious journal entry contemplating ethics. I pressed onward and the storyline came back – now it was an action-oriented conspiracy scenario.  Some of this was interesting (and I had images of the most recent Mission Impossible movie in my head).

The third part is really the weirdest part. Things get a little more esoteric and “new age.”  I felt that in parts Gunn was imitating a Platonic dialogue (no plot, all conversation). I struggled with deciding whether there was logic in this rambling part or if it was disjointed.  My favorite section is the first one (with the Duplicates) because that could have been a super-creepy, eerie plot! I see and understand what Gunn did here – I rather dislike it and am not entirely sure it is the obvious trajectory for the story. It is difficult to say because I am entirely too biased. I’m a philosopher by education and trade – to me, much of this was just tedious and droll. Maybe other readers are able to find something better in it? The God-references are somewhat stretched, in my opinion. Or maybe they are a natural result of the 1955 – 1961 time period and the real life societal changes that were occurring. Also, at the base of it all, well, a ruined planet that is run by a god-like machine has been done in many ways and places – and better than this iteration.