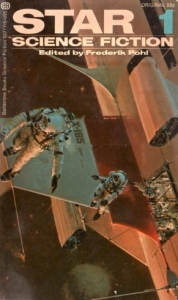 Star Science Fiction 1 is the first book in the anthology series, Star Science Fiction Stories, edited by Frederik Pohl.  It was first published in 1953 by Ballantine Books and reprinted in 1972.  The book is especially notable because it contains the first appearance of Arthur C. Clarke’s short story, The Nine Billion Names of God.  I read the 1972 edition with the John Berkey cover. I picked up my copy on a clearance display for $1. Editor Pohl provides a little opinion paragraph on the start page for each story. These little comments are interesting, but sometimes a little obnoxious.

My overall impression is that Pohl worked hard to select and present stories that would appeal to science fiction fans as well as to a more general readership.  Many of these stories emphasize or highlight some aspect of humanity or human relationships.  These are not simply “laser gun/alien” stories.  And the science is very minimal.  This is a decent collection of strong stories, but I did not feel that the stories were outstandingly awesome. Nothing here wow-ed me – maybe Pohl was playing it safe.  These are solid stories to be enjoyed, but maybe not to be all that excited about. The table of contents reads like a hall of fame inductee list.

The majority of stories in this collection focus on the effect science fiction situations and scenarios have on humans.  In some cases, there is an exploration of emotions.  In other cases, authors consider humanity’s common traits.  It seems odd to say it, but the stories are more about humanity than about science fiction.  And maybe that is why my ratings seem a tad bit lower – I tend to prefer my science fiction to be strongly science fiction.

The stories by Leiber, Merril, and Bradbury were not as good as the rest.  These three were let-downs and were rather poor. I have read so much better by both Bradbury and Leiber.  This is the first writing that I read by Merril, but I can see why Pohl selected it – it fits the theme of this collection nicely.  Leinster’s was pretty weak, in my opinion; a big fat “who cares!” for the plot. My favorite story of the bunch is by Sheckley.  Hands down it is a good story that matches the theme of this collection without turning sappy or overdramatic.  It maintained the “science fiction” aspect very well.

I guess the big take-away for this collection is something along the lines of:  science, the future, space exploration, etc. do not happen in a vacuum. Such things do not happen without humans. Without a doubt, it is necessary to consider humanity as the main delta in the equation.  Humans are not pure machines with perfectly predictable actions and reactions.  They are susceptible to a variety of traits and tendencies – but they remain unique and spontaneous.  Many times humans respond with their emotions rather than with pure calculated rationality.  Therefore, any vision of the future or of science [science fiction], must not ignore the humanity that drives it along. These stories work diligently to present a multitude of situations in which the humanity of the characters is the main focal point.

All of these stories are definitely classic stories. They are ones that science fiction readers ought to read because they are early 1950s stories that present a deep and relevant understanding of what science (and, therefore, science fiction) is about and how it reflects upon humans.  The majority of science fiction tends to focus on how mankind changes his universe.  These stories investigate how the universe (and the advancement of science) changes mankind – mostly on an individual/personal level.

I am probably too Russian or too autistic to really appreciate some of these stories. Or, I understand them, but I am just not excited about them.  However, this does not mean that they will not appeal to other readers. In fact, I think these stories will actually have a vast appeal because they are so personal-centric.  The characters are all realistic people who seem to react in realistic ways.  And these characters have a relationship with their kin – marriages, families, society at large.  These stories explore those relationships and that basically is one of the interests of all the readers that I know!

A few comments on the actual stories:

As soon as I began reading the Asimov story, it seemed a higher calibre than some of the others. Asimov was a good writer, regardless of how people criticize some of his stuff. This story, whether you like the plot or not, is very well-written.

Similarly, John Wyndam’s entry is well-written and stylish. It is certainly levels above almost all of the current day short story offerings.  It is unique and fun and if it was about anything but time travel, I would have given it five stars. But time travel is a train wreck for writers – its siren song pulls them in, but philosophy beats down all their exciting ideas.

“Contraption” by Simak was heart-breaking in parts. It is an emotion-filled tale, from which even I could not remain distant.  I would suggest reading this one and Sheckley’s if you only have time for two stories.

Fifteen stories – all very classic and classy.  Definitely worth the $1 I paid for this volume. Definitely worth recommending to other science fiction (even more so to non-science-fiction) fans.