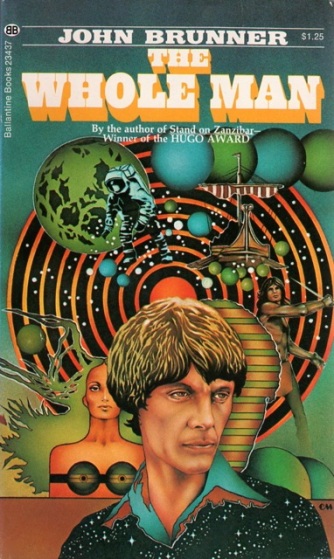 The Whole Man by John Brunner was published in 1964.  In the UK, it was published as Telepathist.  I read the Ballantine 1973 edition with the cover by artist Charles Moll.  I really dislike the cover. I recognize it may be decent artwork, but I really dislike it – it is so…. 1970s. This is kind of how I feel about this novel. Not much in this novel was exciting or very interesting for me. However, it is still a rather impressive novel. So here is The Whole Man – a good novel to read, but not one that will thrill. At the end of the day, it is an contemplative read, not an entertaining read.

The novel takes place in an alternate Earth reality in which telepaths exist and are generally employed in socio-political functions. The whole sphere of interest of this novel is sociology and psychology.  If a reader does not care for these subject areas, then they will find this work a slog.  The main character is Gerry Howson, who is one of the most powerful telepaths (perhaps the most powerful) to live.  He is also a very deformed cripple.  (Except that it is now 2016 and I think I’m supposed to type: “handicapable.”  Howson calls himself a cripple, so we are gonna go with that term for the duration of this entry.)  The novel begins with Howson’s mother in a clinic-style hospital with the background setting of a tumultuous social upheaval.

I did not really speed through the opening chunk of the novel. It was, well, boring. And I feel there was unnecessary or undue focus on Howson’s mother.  It is this opening section that makes me really feel like Brunner was going somewhere entirely different with the novel – something more political, probably. The social turmoil – rioting? terrorism? It is not entirely specified and it is quite vague. And meanwhile the storyline loses traction. I struggled to get started in this book (while pausing a lot to glance at the nearby bookshelves).

The novel does not develop quickly. After the opening chunk, the next section shows us Howson as a young man struggling to survive in a world that is not open to cripples or telepaths. And then there is a whole segment where Howson is wandering sidewalks and having a lot of heavy introspection. I have to be honest, this part was rough for me. It was just so heavy and I am really disinterested in any navel-gazing/sidewalk-wandering in any plot.

However, there are vivid and gripping sections of the storyline; usually parts wherein Howson is actually doing the “real work” of being a professional telepathist. Brunner did not write a child’s conception of telepathy.  This is not some goofy superpower from the comic books.  This is a “scientifically” considered physical scenario in the character’s brains that results in this immaterial power. Howson is a professional telepathist, which has earned him the title of Doctor.  This means that he does this sort of work as a career and there is nothing silly about it whatsoever. I appreciate the solemn and serious attitude in how Brunner approaches this mental power.  Still, the seriousness also gives the novel a very heavy feeling.

Also, because this story is very connected to psychological scenarios Brunner sometimes seems to come across as if he breezed through an introduction to Freudian psychology and just incorporated some stereotypical ideas as he develops Howson’s character.  It is not that these parts are overdone, it just seems like unless a writer is really willing to jump in and is capable of swimming, just splashing around with Freud 101 does not suit.

In the latter half of the book there are a couple of events that occur that are very well written and had me rather fascinated with the story.  Those who have read the novel probably can guess I am discussing Hao Sen/ Tiger City stuff, which is where Brunner takes us into the “subconscious/dream world” of telepathists. Another event is the Rudi Allef event. The Rudi Allef character is the big key to Gerry Howson’s character, so the fact that we only meet Allef at the tail end of the storyline seems to confirm some of my sentiments from the start of the novel:  Brunner was not entirely certain where he was driving this storyline. Now, as I understand it, this is a “fix-up” novel in which Brunner combined a couple of previously written novellas.  I am not sure we “fixed it up” in a good way. Or maybe the third section alone should have been expanded?

The situation (I do not want to put out any spoilers!) with Rudi is quite interesting and intelligent. I appreciate a lot of what Brunner developed conceptually in this section. It made me consider a whole host of things including:  autism, synesthesia, and aesthetics.  However, suddenly using these concepts this late in the novel kind of makes it seem as if Brunner threw it together too late and just because. It shows that it is a “fix up.”

I think I was more interested in the societal impact of having telepathists and so forth over the personal development thread that focuses on Howson and his challenges. Big picture over human interest……

Overall, the storyline has a lot of peaks and valleys.  The concepts are intelligent and interesting, but there is a weight to the novel that slows the read down and makes it a little more like reading a case study than entertainment fiction.  I am glad I read this novel, but I sure cannot think of a person I would recommend this to. Its a good book, but it is not easy to like.  I would give it 3.83 stars if I could – 4 seems a gift.