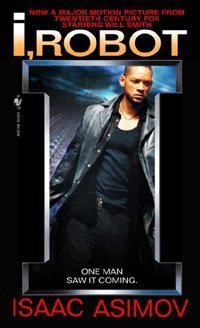 It is Vintage Science Fiction Month – so designated by my fellow blogger friend, the Little Red Reviewer. Generally, I like participating in this non-challenge reading fun, but this January I’ve been traveling and busy and I am worried I will not have many entries. Nevertheless, I managed to eke out one novel so far. I went with a “classic” vintage work to start off. Honestly, I do not remember if I have read I, Robot before – all or in parts, or other. I do know I have never read further in the “robot series,” so I thought this was a good way to march back down the Asimov-pathway.

I, Robot is generally considered a collection because it contains stories that were originally published in periodicals in the 1940s. I think it can be successfully referred to as a sort of fix-up novel at this point, as well. The collection as titled I, Robot was first published in 1950 and I read the 2004 (movie cover art) version this time around.  As we all *should* know, the movie starring Will Smith has only a basic and tenuous connection to these stories.  The nine stories contained in the collection form a general timeline utilizing the life of U.S. Robots and Mechanical Men employee Dr. Susan Calvin as a waypoint marker. Therefore, the collected stories form a more cohesive, although faceted, whole than I think Asimov originally created.  For anyone interested in trivia, this collection is dedicated to “John W. Campbell, jr., who godfathered the robots.”

I, Robot is considered a classic for a number of valid reasons.  It is an “early” science fiction work that is not embarrassingly dated by today’s milestones.  It is an intelligent read, unlike much of the 1940s pulp fiction that was being published.  It contains new and exciting ideas that demonstrated Asimov’s wit, knowledge, and forward-thinking mastery.  It ended up influencing and spawning all kinds of science, science fiction, and literary offspring. So, not only were Asimov’s ideas new at the time, but they didn’t wear out after a decade had passed, either.

Since this collection was published in 1950 and is so extremely well-known, it is difficult to know what to say that has not already been said hundreds of times. I am certain that this work has been examined every which way and with all sorts of hermeneutics. Many readers are already quite familiar with this book. If you are not familiar with this book, there are some key things I think you should know.  First of all, don’t connect the same-titled movie to this novel. There is not much connection there, so do not be put off by that.  Secondly, this is a quick-read, therefore it will not pull you too far from your current to-be-read stack trajectory.  Thirdly, it is an intelligent read, but it is not pretentious or high-brow.

The book is an undisputed classic.  However, I only give it four stars for a rating.  The main thrust behind each and every story in this collection is logic.  Literally, logic is what this collection is built upon.  That is fairly congruous since this is a book about “mechanical men” and mathematics and machines.  Asimov is a talented logician.  From only what this book tells me, I can promise that Asimov was comfortable with Barbara, Celarent, Darii, Ferio, etc.  Building all these stories on logic – while making them actually suspenseful and interesting – is really awesome.  However, at the end of the day, the skeleton is just logic and its really not enough.

Since the skeleton is logic, we must say that the Laws of Robotics are the flesh of the stories, the meat as it were. And boy, Asimov does drill these laws into the reader! He actually takes these laws and looks at them from a multitude of contexts and usages and no reader is going to escape this book without a very solid understanding of the laws.  Sometimes, this gets a bit exhausting. On the other hand, Asimov was an excellent teacher. He’s the guy you want teaching you logic, physics, and mathematics. His is the challenging class that you struggle through but your knowledge grows by leaps and bounds. Therefore, even though the laws are hammered at throughout these stories, the number of ways in which Asimov constructs the stories around them is quite masterful. Nevertheless, some readers might get a bit bored.

The most important character throughout this collection is Dr. Susan Calvin.  I am pretty sure someone, somewhere has ruefully commented on her last name and made some sketchy connection to John Calvin and his ideas, so I don’t need to go further on that point. But if this is a valid juxtaposition, it is something some enterprising student should run with in a paper or two.  Calvin is a robopsychologist.  She works for U.S. Robots and Mechanical Men, although most of the time I feel she would rather not.  It is unclear if there exist other such robopsychologists or if Susan is the only one.  Anyway, this “soft science” balance to the hard science of mechanical, mathematical robotics shows that Asimov was a keen observer of humanity.  When I first met Calvin in these stories, I really disliked her. Overall, she is really aggressive and hostile.  She is also, allegedly, really good at her job.  She is definitely a character study for those interested in such things.  More food for thought:  casting her role in a motion picture. . . who is that actress?

Overall, I give this four stars because I can see what Asimov is capable of – and, frankly, he is capable of so much more.  Yeah, I am saying it:  Asimov was a big intellect – but I want to push him for more and better. The skeleton and flesh of these stories is good – but at points also a little monotonous. This is a necessary, classic read that should satisfy most readers.