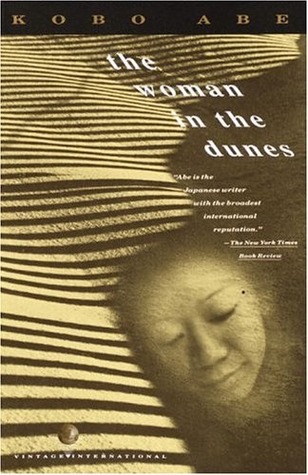 The Woman in the Dunes by Kobo Abe (1924 – 1993) was first published in 1962.  I read the Vintage International edition from 1991. The novel won the Yomiuri Prize. In 1964, a Japanese film by the famous Hiroshi Teshigahara was released – author Kobo Abe wrote the screenplay. The film was nominated for an Academy Award, but lost to the Italian film Yesterday, Today and Tomorrow by Vittorio De Sica.

This is probably Kobo Abe’s most famous novel. I have not read any of his other works, but I do own The Ark Sakura. I am open to reading other works by this author, but he does not interest me at the same level as some of the other super-famous authors of mid-20th Century Japanese authors. Sometimes his works are classified as absurdist/surreal literature, which is a genre I can sometimes devour and at other times am disinterested in.

The man intended to collect insects that lived in the dunes. – pg. 10

I enjoyed this book, and I really do appreciate what the author has shown us via sand. However, I cannot help but subtract a few points from my estimation of its rating due to a few sections of the novel.

There are dozens of ways to interpret this novel, but the erosion of the main character’s opinions via the Sisyphus-lifestyle is the overwhelming concept. The sand claims all – eventually. Survival alongside the eroding powers of the sand drives the story. The way the sand affects everything is really well done. The author very gradually traps the main character within the pit in the dunes. This is, in my opinion, the most beautiful part of the writing; the character being trapped is done so subtly and simply.

I really enjoyed the early chapters because the early interactions between the man and the woman are so very well written. In translation, the woman’s sentences are often open-ended, with ellipses or simple statements that only seem innocent:

“But somebody just said ‘for the other one.'”

“Hmm. Well, they’re referring to you.”

One of my favorite aspects of the novel is how the woman clearly knows what is going on and yet, is able to seem innocent. Though she knows what is happening to the man, she may or may not be powerless to stop/change it. Like the man, the reader will probably consider, in turns, the woman to be mentally challenged, an entrapping vixen, or a resigned, but dedicated villager.

The author really puts the main character through some suffering, but he also inflicts some on the reader. Readers will constantly want “justice” or “to know the reason” or “someone to accuse” through the novel. And Kobo Abe just doesn’t provide a clear and direct target for all of that. Frustrating? Maybe. Engaging? Definitely. (Probably the reason for Kafka comparisons.)

Stop looking so stupid! He was angry; he wanted to make her admit her guilt even if he had to force it out of her. – pg. 90

The subtle horror of being trapped/imprisoned for, seemingly, no reason is the key that makes this novel so vibrantly emotional. Even if I disliked parts of the novel, I have to credit the author with the ability of being able to tap into that fundamental chord in my being that I assume every human possesses, which rebels against such a circumstance. It seems it is easier to accept a prison sentence if there is a reason. But without reason or cause, without an authority or a captor to blame, without a purpose or goal – such an imprisonment is a magnitude of horror well beyond a reasonable incarceration.

For some time he concentrated on digging.  The sand was exceedingly tractable, and his work appeared to be progressing.  The sound of the shovel as it bit into the sand, and his own breathing, ticked away the time. However, at last his arms began to grow weary. He thought he had worked for a considerable time, but his digging had apparently had no results at all. Only a little bit of sand had fallen from right above where he was digging. – pg. 68

The man’s psychological state is what one might expect. He is outraged, indignant, and frustrated. He calms himself by convincing himself a rational and thoughtful method will rescue him. He dips into the violent and the desperate. He only very gradually comes to realize an outcome, which, perhaps, the woman knew from the start. The woman’s reaction to the man’s arrival, when you think about it in retrospect, contains all of the pensive understanding of what she knows he and, by connection, herself will have to undergo. Her early timidity is probably because she knows what emotional turmoil will occur – and she has to resign herself to going through the turbulence as well.  In a way, this also means that nothing the man does truly surprises her.

And what of the man’s mental state? At points he forces himself to be relatively rational. Bargaining and reasoning with his supposed captors. He also attempts “scientific” escapes and schemes. But he is also clearly disturbed because he has mental conversations with himself – or the Mobius man.  Kobo Abe even suggests, subtly, that there is an element of schizophrenia at play. Late in the novel, the man has a mental conversation with an imagined judge:

-I am telling you that in Japan schizophrenia occurs at the rate of one out of every hundred persons. – pg. 217

And this fascinating little segment with the man conversing with himself continues to an amusing conclusion:

-Well, listen to me calmly.  Acrophobes, heroin addicts, hysterics, homicidal maniacs, syphilitics, morons – suppose there were one per cent of each of these, the total would be twenty per cent. If you could enumerate eighty more abnormalities at this rate – and of course you could – there would be statistical proof that humanity is a hundred per cent abnormal. – pg. 218

I disliked, though, the chunk at the end where the main character is told the “deal” how the villagers will let him see beyond the pit. This was weird/vulgar and destroyed a lot of good faith I had in the author. This part was the “too far” point in the writing.

Excellent in concept and writing, although the 1960s-Freudian-focus is a bit too prominent in the whole thing. Definitely for an adult readership. I appreciate the “horror” of the novel, but dislike some of the episodes. In any case, this is an excellent novel for book clubs, I think, because there is a lot to discuss about all of the various interpretations available.