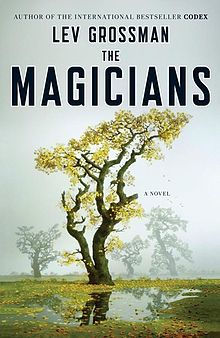 The Magicians by Lev Grossman was released in 2009.  I finally got it in 2013 at a used book library sale.  For a dollar. I had seen it a couple of times for $3 for a new tradeback copy at Books-a-Million, but I passed it over and it was all sold out eventually.  Color me pleased when I found it in January for $1 for the hardback.  By that time, I had read a number of reviews on Amazon.com and Goodreads.com.   Reviewers keep reiterating that it is like an “adult Harry Potter” novel.  Well, no, I do not think it is.  Not that I have read the Harry Potter books, but I feel if you go into the novel thinking that you are setting incorrect expectations. Bottom line here:  Not an adult Harry Potter. Don’t believe the hype, folks.

The storyline itself is actually well-written.  Scenes move reasonably into other scenes, characters develop at a good pace, clues and hints throughout the story come back and play roles, and the balance between description and action is decent.  The conversation dialogue is actually fairly accurate for the characters.  It does include “adult language.” (It’s not adult – it’s called “cussin,’ folks.)  There is not an overabundance of hefty vocabulary (Cp. China Mieville) to bludgeon the reader with the author’s intelligence.  Some of the more causal speak actually seems forced – as if the author is more comfortable writing formally than colloquially.  For example, the phrase: “But still.”  What the heck does that mean? Nothing. It’s just a spoken phrase that has worked its way into everyday parlance. Things that like that pepper the novel; perhaps to give the reader the sense of reading about teenagers and college students.

And this is why I insist that the book is more like Donna Tartt’s The Secret History than the Harry Potter novels. The book is about smart, rich, entitled kids who are magicians.  They go to a secret University in order to formally train in magic.  Magic is not a thing of wonder and surprise. In this novel, magic is much more like a martial art, a skilled trade, or a scientific field.  The University is not a fun and mystical place.  So, if you expect the Escher-like corridors of Hogwart’s or the silliness of Wonderland – forget it.  That’s not what this novel is doing and complaining about this novel because it actually isn’t those novels is faulty.

The characters are easily dislikeable.  Really. I mean, who does not dislike young adults who are hedonistic and whine about how they are misunderstood and their lives are boring?  And this is not entirely unheard of.  I am sure Grossman has run across plenty of college students who have this air about them.  In fact, having spent some time in universities, I can vouch for the fact that some students even put on this sort of act because they feel this is how students are “supposed” to be.   If the average reader finds this all very abhorrent and toxic, well, they are probably overreacting.  It’s easy to hate characters for not being how we think they should be or because we are jealous of them, or because they are so very different from us.  But a good reader can move past that feeling and realize they are not the author and it’s not their story.

The main character is Quentin Coldwater.  He’s not a bad character, all things considered.  He is a bit tentative and cowardly, but very few young adults are actually authentically confident and secure.  He makes mistakes – not really bad ones, but things have a tendency to snowball on him.  And while it is good that he finds people at the University that he can belong among, they are also not the greatest influences he could find, either.  But that is exactly how real life is.  Perfection is somewhat rare in the real world.  I like Quentin well enough and I do feel bad for him at times. Some times I wish he would pull his head out of his butt and think.  Sometimes I understand him completely:

It was a glorious relief.  The numbness of it was just magnificent.  At the moment when it had been at its most intolerably painful, the world, normally so unreliable and insensitive in these matters, had done him the favor of vanishing completely.  — pg. 252

The character Alice Quinn is pretty cool as well. I really enjoyed the foray into her parents’ home – that was creative and interesting writing.  In fact, just because Grossman’s concept of magic is not that of Tolkien’s or Rowling’s does not mean his is weak or stupid. In fact, of them – his is actually the most fleshed out and developed.  He shows us magic in a variety of settings and uses.  And he presents a somewhat darker image of it – not the starry-eyed kiddos’ of Hogwarts.  Anyway, Alice is probably the best magician and student of the bunch.  She’s interesting and she is a good character to match with Quentin.  Their story develops and as it continues, I think readers have a lot of respect for her for a number of reasons.  Her insightfulness, her bravery, and her dedication.

I found Eliot to be the most tedious of characters.  In a lot of ways, he’s the most stereotypical character – one wants to say “yeah, he’s in the story because every story has one of him.”  I disliked him and I suppose he has a role to play, but honestly, he is arrogant and crass and a lot less likeable than the others.  He does take that archetypal character in a University, though. The aloof loner who is uppity and yet slums with the losers on occasion.

The novel uses the tools that C. S. Lewis and J. K. Rowling created.  I do not think this is a bad thing. I think it’s fairly gutsy and interesting.  I think readers who focus on the similarities and spend time calling Grossman’s work derivative are missing the good of The Magicians.  Using the tools the other authors provide, Grossman is telling us a different story.  The thing that I do not really like about Grossman’s story is the existentialist feeling it has.  Existentialism (to me) always seems dreary and navel-gazing. So, it was this element that weighed the novel down – and yes, at places, this is a heavy dismal thing.  Nevertheless, the ending leads us right into the sequel.  Maybe by then readers will stop comparing the novel to what it isn’t and read it for what it is?  And what it is, is a question of how much hope and redemption Quentin Coldwater can find in any world – Earth or Fillory.

** Update:  The author of this book commented at me on Twitter. His comment suggested that since I gave Kafka’s “The Trial” only 2 stars, he feels his book is in good company (and I’m a “bad reader”).  My review was honest; apparently the author cannot take criticism. Also, in 2013 The Atlantic published a story: “Is Kafka Overrated?” – I agree with much of that article. Needless to say, I will not be reading anything further by Grossman.