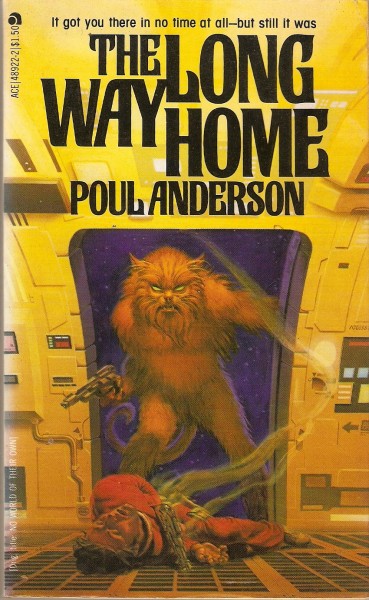 I am stuck in 1955 – 1958.   I just finished Poul Anderson’s The Long Way Home.  It was originally published in bits in 1955 as No World of Their Own, but then re-assembled in 1958 as The Long Way Home.  I think; honestly, the history of this particular work is a somewhat sketchy.  My copy is the Ace February 1978 edition with the fun Michael Whelan cover art.  It has a very short introduction by the author:

This novel was serialized in Astounding Science Fiction.  The paperback book edition appeared as No World of Their Own.  That was not my idea, nor were the cuts which mutilated the text.  Both have remained until now, when editor Jim Baen generously gave me a chance to restore things.

In such cases, it is always a temptation to go ahead and rewrite, with the benefit of many additional years’ experience.  I have refrained from that.  Although today I would handle the tale rather differently, it is, I think, a good story as it stands.

I read this, mainly, because it is the earliest Poul Anderson novel that I currently own.  I already knew enough about Anderson to have an idea of what to expect.  Anderson writes about sociological/political themes, theories, and backgrounds.  He was a writer that brings good things to the genre.  By this I mean that he is not just creating action-pulp stories with creepy aliens.  Anderson utilizes the genre to delve into a variety of sociological/political scenarios that are “conceptually-relevant.”

This novel is written with a bluntness that sometimes is too direct.  There is no finesse.

The sentence structure is not beautiful whatsoever.  There are many places where the writing seems as droll and banal as if we were reading a dry engineering textbook.  This is not a crushing condemnation of the author’s style, but it seems to me if you want to write sociology – do so, and write articles, texts, etc.  If you want to write fiction – work on sprucing it up a bit. Here we could have a good discussion regarding “form and function,” but I don’t know that anyone besides myself would be reading along.  Pretend the discussion has occurred – move to next paragraph of this review.

So, what Anderson does do very well is to create a far-flung future in which very specific (psychological) characteristics of humans are magnified and driven to their “conclusion.”  Anderson is presenting a number of ideas here that may interest certain readers.  For example, what makes humans inquisitive?  Is a one-world-incorruptible governing body the best possible government for civilization?  Is there always to be a sort of caste system in human civilization – based on intelligence, perhaps?  What factors cause humanity to become stagnant?  Can the extent of possible progress be reached?

All of these questions (which are not as delineated as I have made them) are rolled into the scenario of a Dune-like scheming background.  Several interest groups (economic, local, foreign) are all trying to get their hands on an alien who was traveling with the main character, Edward Langely.  This alien is actually the only truly creative element in the entire novel.  Saris Hronna is, basically, a humanoid-cat, from a far away planet.  He is also equipped with a type of telepathy and among his people is a style of philosopher.  Once this novel gets going, he quickly becomes a fugitive and provides the impetus for most of the action of the novel.

Overall, the novel is interesting because of the commentary/questions Anderson presents in the sociological arena.  However, the main character is repetitive and bland.  The other characters are flat and are just there to represent the three factions.  Most of the book is in dialogue format, wherein the characters give us very general information about what this future looks like and what their opinions on humanity are.  The resolution of the whole novel is rather neat – it made me give a nod to it, but it is nothing wildly creative and exciting.  This is a good novel if you are into vintage science fiction and/or sociology.  A lot of readers who devour current science fiction books might not be interested in this thing.  It does not really “show its age,” because Anderson keeps the whole thing so general.  And maybe that’s the worst part of the whole thing – it is all too general and broad.