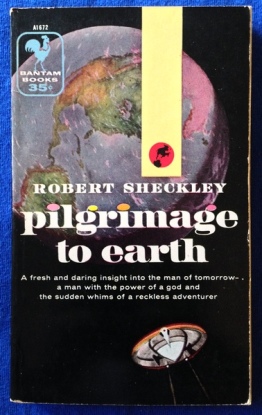 Pilgrimage to Earth is a collection of short stories written in the 1950s by Robert Sheckley.  The collection of fifteen stories was first published in October of 1957.  This is the second Sheckley collection I have read; I can comfortably recommend both collections to readers.

The back of the book has a blurb by New York Herald Tribune stating: “No one in recent years has vaulted so promptly into the first rank.”   I keep imagining Sheckley vaulting promptly… with no lagging or sluggishness.  For a bit of trivia, the book is dedicated to Harry Altschuler.  Altschuler (1913 – 1990) was Sheckley’s literary agent. In fact, he was a fairly significant player in publishing during the 40s, 50s, 60s.

Well, I started this collection in June, but only finished it now, in November. I made it halfway through and then my cat drooled on the front cover – an entire house for him to destroy and he purposely seeks out something valuable like a book. I was disheartened, though I cleaned the cover (and it did not suffer much damage, really), so I read other things. Finally, I decided I’d better finish this collection.

I mention this rather stupid story to sort of explain why I do not remember all of my thoughts that I had in June regarding this collection.  Luckily, I’m trained well-enough to write down one or two words as I go along for each story, but that does not mean a thorough review of the works.

One of the things that I remember from Citizen in Space and also is apparent in this collection is Sheckley’s wry sense of humor.  There are keen senses of humor, off-color senses of humor, dry/deadpan senses of humor – but rarely do I really find someone with a truly wry sense of humor.  Just like the dictionary says, his stories contain clever and often ironic tidbits.  For the most part, this keeps the stories fresh and interesting.  After having read two of his collections, I am slightly, very slightly, less impressed with this wryness. I mean, maybe he’s overusing it a bit? Well, even if he is, it surely is not any amount that would dissuade me from reading his work.

Sheckley combines that wry sense of humor with his studies of humans. I think he was only about twenty-nine years old when this collection was published.  But throughout, it contains a feeling that he is poking fun at humanity just a little. He seems to have some degree of  the “understanding people” skill that was so massively developed in great authors like H. L. Mencken and G. K. Chesterton. The combination of this skill with his wry wit makes his short stories readable – and then, re-readable.

The stories Pilgrimage to Earth, Disposal Service, and Human Man’s Burden are very much worthwhile; containing the wry little twist to make them amusing and a little surprising.  They also seem to demonstrate humans at their core.  Pilgrimage to Earth and Disposal Service are actually somewhat disturbing stories if you really consider the heart of the story [pun intended].  The former involves Alfred Simon returning to Earth whereat anything he wants can be bought – including love. But is it really love, like the poets of old would name it?  Disposal Service centers on the 17-year marriage of the Ferguson’s and a unique service that the couple uses. Both stories hinge upon the freedoms and scientific advancements of mankind, but show that mankind is still governed and tossed about by emotions and whim.

That is probably a theme for the majority of the stories in this collection. I recognize that theme in Deadhead and Earth, Air, Fire, Water – both stories that I did not consider to be more than average works.  Nevertheless, there is that theme that no matter how “advanced” mankind seems, he is still the animal, from Earth, that can be whimsical, irrational, over-confident, and foolish.  Maybe the lesson, if there is one, that Sheckley wants to show us is that the key characteristic of humans is that they are both scientific and silly.

Based on my ratings for the individual stories, I clearly like the first half of the book more than the second. I think the stories that I rated below 3 stars all seem to suffer from the same problem:  just a little too much is left unsaid, unsolved, and/or unexplained.  This lack makes the stories seem a bit underdeveloped and not fully written.  Bad Medicine is one example, The Academy is the other. The story has potential, but just doesn’t completely work.

Finally, the last two stories in the collection are part of a “series.” By this I mean, a common element is found in these stories and then in other stories (not part of this collection) by Sheckley.  Here we meet the proprietors of the AAA Ace Interplanetary Decontamination Service.  Basically, some fellows trying to make some money in a universe of highly competitive businesses, corporations, and smugglers.  This “series” is definitely interesting and I really got a kick out of Milk Run.  Both of these AAA Ace stories are fun adventures for all those readers who want some amusing space pulp fiction.